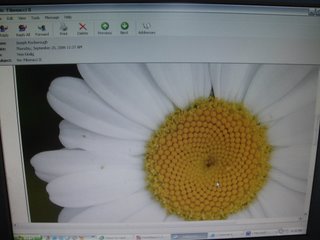 As always, I find myself fascinated by how life’s seemingly inconsequential threads silently weave themselves together to bestow a sense of meaning to those willing to seek it. While I was writing about my love for the movie 84 Charing Cross Road and bemoaning my neurotic perfectionism, a new piece of cloth was being woven in the background. It’s a bright, crazy explosion of color– orange and purple I think – one of those open weave sort of things where the threads run downhill and end up with a crooked fringe on all four sides. Every time I think about it it makes me laugh, primarily because it’s bright enough to send distress signals to the moon yet I only now realized it for what it is.

What it is is this – an unexpected blessing and proof positive that God has a sense of humor. The British bookseller on Charing Cross Road had his eccentric customer, Helen Hanff, and Mitch Albom had his Tuesdays With Morrie, but neither one of them had anything on me. Lucky me, I’m a bookseller who has Sundays With Joe.

Joe is a customer who came into my life via Alibris, which is joke in itself since at the time Alibris was the one online book service that worked the hardest to keep the gap between customer and bookseller wider than the Mississippi River after a monsoon. But none of their technological tomfoolery stopped Joe -- he plowed right in and found me anyhow. The big question is why he hung around. I mean all I ever did was sell him a book -- a nice book and wrapped rather prettily too -- but, even so, it’s hardly enough to make me worthy of my own private brass band. And yet a brass band is what I got. Joe laughs at my jokes, talks me out of the trees when I get hysterical, teaches me things I don’t know, and reassures me that he never says anything bad about me. It doesn’t get much better than that, especially considering the fact that he was building radios back when the only thing I was building involved alphabet blocks.

Currently he’s instructing me in the intricacies of the Fibonacci sequence. Laugh, but this is much harder than it seems, as I am profoundly mathematically challenged, though Joe won’t brook that excuse for a nanosecond.

“Come on Tess, you have to do this! I know it's hard, but the more you look, the easier it gets. Look again! It builds CHARACTER.”

This came after I whined about last week’s lesson which required the transmission of a large color photo of the heart of a flower in which all the tight little yellow seed pod things swirled in two different directions. My assignment was to count the rows of seed pod things going each way. Think it’s easy? Well, think again, as the heart of a flower truly examined not only crosses your eyes, but sends them, boinging ( yes, boinging) out of their sockets. My answer was twelve each way, but I doubt I’m right, and even if I am, I haven’t a clue what it has to do with adding sequential numbers together to arrive at the next number in the sequence. I’m sure I’ll find out come Sunday morning though

Which brings me to the cool part of the story. All this fun stuff is conducted in its near entirety on Sunday mornings, usually before the sun crawls across the horizon. Before most people are even up, much less caffeinated, heavy discussions are being conducted across cyberspace about such things as loons, the game 25 Words Or Less, the benefits of walking, basketball versus football, perfectionism, nuns, movie dialogue and, of course, the Fibonacci sequence.

Why this cloth is being woven in the background of my life I don’t know, but I suspect it’s a spiritual enterprise. (I can already hear Joe laughing at that one, but never mind.) Every Sunday morning my friend Nancy and I walk five miles, an endeavor I know for a fact is a spiritual enterprise. Since this discourse has become its prelude, it wouldn’t surprise me in the least if the cloth turns into a coat of many colors. It’s already orange and purple and bright enough to send distress signals to the moon. And Joseph, let us not forget, was the guy with the amazing technicolor dreamcoat.
Posted by tess at 5:34 PM No comments:

The Moral of the Chicken Juice Shower 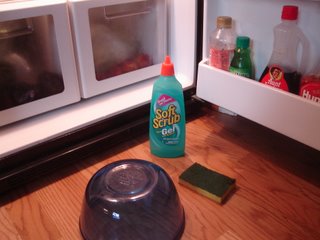 Life has strange ways of bringing us to our knees. Sometimes it’s metaphorical and sometimes it’s literal. For me, it was both, which partially explains my silence, since the event occurred exactly two weeks ago today, the day after I wrote my last blog. It was six-thirty a.m. of the morning of my niece Mandy’s wedding shower. The afore-mentioned tarts had been baked and arranged in all their cherry-almond and apple-cranberry splendor on trays in the refrigerator. Their baker, however, was anything but splendid. I was bleary-eyed, vaguely out of sorts from the previous day’s existential angst, and looking like the remains of a gone-to-seed dandelion after a puff of wind. If that seems like an exaggeration just visualize wrinkly aqua p.j.s. and olive green socks.

Anyway, I opened the refrigerator, waved my hand around in the general vicinity of the red plastic container of Folger’s as I do every morning, and wound up plastered against the kitchen island. I’m telling you -- I never saw this one coming. The coffee container hit a bowl of defrosted chicken and sent the whole thing hurtling forward onto the floor, giving both trays of tarts a fly-by chicken juice shower on the way down. I suppose a less neurotic person might have trusted the integrity of plastic wrap, but I had not been PR director of a nursing home for three long years for nothing. I’d seen the Health Department inspector give the Dietary Director a citation for putting her purse on the counter, for Pete’s sake. Never mind squadrons of salmonella flying around inside the Maytag.

So I did the only thing I could -- dropped to my knees, picked up the chicken, scrubbed the devil out of the laminate, dumped the (perfect) tarts down the garbage disposal and began taking everything out of the #$%^&&** refrigerator. That’s right -- I swore a lot, which I have found is the best front line of defense when life brings you to your knees in small, but absolute, ways. The funny thing is, while I was down on the floor screaming like a banshee a couple major thoughts occurred to me. First I wondered whether I had enough ingredients to make more tarts. (No.) Next I wondered what I could make in their place. (Cookies, lemon bars, brownies) And then it occurred to me that I would make absolutely nothing. That’s right – nothing. Zip. Zero. Zilch. NADA. I would go to the bakery as if I were a truly sane person who understands the reason God invented bakeries and buy some tarts.

Once that was decided, it next occurred to me that maybe it wasn’t an accident that the chicken took a joy ride. Maybe it was to show me that I really don’t have to go through life as a neurotic pleaser. (Wow! There’s a novel thought!) And maybe -- just maybe -- my whole problem with not writing anymore has something to do with being a neurotic, perfectionistic pleaser. And maybe since I'm writing a blog it means that I'm technically writing anyway. And maybe if I can write a blog then it stands to reason that maybe I can write something else too!

So I went to the bakery, bought the tarts, took them to the shower, told a funny story about it, went home, and started writing something. And that’s why I haven’t written anything here for fourteen days. I’ve been too busy writing what might become a novel. Or not. But it doesn't matter whether it does, or it doesn't, because A.) I'm writing again and B) (this is the amazing part) I'm having a blast doing it!
Posted by tess at 4:36 PM No comments: