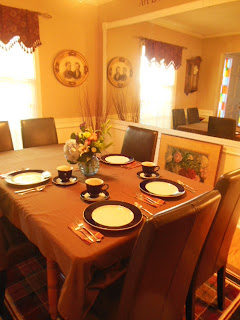 Sunday night was so much fun I wrote a post about it Monday afternoon. I had no time to upload it though, so I did it yesterday morning and somehow managed to delete it in the process. Where have we heard THAT before, huh?  I had no  time to rewrite it yesterday because I had a speaking engagement in the afternoon about bookselling which I will tell you about another day. But for now I am committed to trying to reconstruct the lost story.


Two of our favorite booksellers came for Sunday dinner (bearing wine!) over which  we talked a blue streak about the world of online bookselling in this crazy year of 2013. It’s kind of interesting that they were seeking info from me because they aren’t exactly new kids on the block. One of them worked in bookstores for many years and has a degree which affords him the chance to specialize in an excellent genre. Given his depth of knowledge  he could end up OWNING this genre! His partner likewise has a great specialty, so together they are one dynamic duo infused with passion, intelligence, a love of books, impeccable social skills, and the ability to wrap a decent package. And -- get this – their holdings are about triple mine at the moment.


But even with all that in their favor, I  do have one thing with which I can help them and that’s what I aim to do. The only reason they lack this one thing is because of when and how they entered the book game. I arrived online in 1997 via Advanced Book Exchange while they came on the scene a little later through the  Amazonian portal. By the time they got there the Big River was already polluted and I had long since waded out of its muddy waters. In amazon land many people start selling with no real business name – a la our friends. At ABE you had to have one from the get-go which of course in the fullness of time leads to an independent website, social media accounts, blogs, book fairs etc. – all the stuff needed to crank a business up to the next electronic level. By now I’ve acquired all that stuff, for better or worse, so pretty soon they will too. But even without it  they’re already in a better position than I am at the moment.


I could be depressed about it. I could be a hell of lot depressed about it in fact.But I’m not. If I were depressed you’d know because I would tell you. Part of the reason why I have such a low inventory  right now is the acquisition problem we’ve struggled with these past couple years. But it’s also the result of a good thing – our phenomenal sell-through over the years and the Great Purge I’ve embarked on this summer. But all this month a steady stream of decent stuff flowed in here – nothing stellar but certainly good enough -- so I am optimistic that better will follow. I also firmly believe that despite the oft-quoted comment I heard in line at a book sale years ago --“You don’t gotta know nothin’ to sell books!” – the truth is that he or she with the most knowledge  wins the book game. Interestingly enough, I just ran across a great story told by Canadian antiquarian bookseller, David Mason, in his wonderful new memoir,The Pope’s Book Binder. It’s so illustrative of what I just said you’d swear I made it up, but I swear I DIDN’T—look  on pages 115 and 116  and see for yourself..


One night Mason and a gang of inebriated booksellers were weaving their way  to the next watering hole when one them picked up a box of pamphlets lying at the side of road in wait of the trash truck. An alcoholic haze had descended to a greater or lesser degree over them all,  so they didn’t examine the leavings until they were safely ensconced in the next pub. The little booklets – there were many -- were all written in what they agreed was the Russian language. Mason concurred, but when he got his chance to take a closer look he immediately spotted something everyone else had missed – the imprints. Though written in  the Cyrillic alphabet,  Mason knew from having researched  some of the little booklets in the past  that two of the imprints  were Winnipeg, Manitoba and Toronto respectively. He also knew enough Canadian history to know precisely why the box had turned up where it had. Immediately he offered the finder fifty dollars for the entire thing, a bid which was snapped up faster than you can say LaBlatte Blue. Mason carted his treasures home and right away sold several for $300 and $400.


I’ve had my share of those kind of lucky breaks and had the wits to use them to my benefit, so I have good reason to believe I’ll do it again. Right now it’s enough to be happy for our friends. They’re going to be great. They already ARE  great.


They’re just going to be more visible.
Posted by tess at 1:20 PM 8 comments: 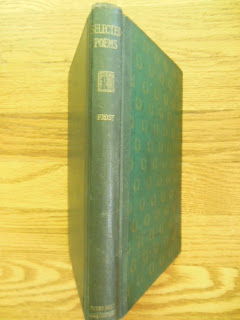 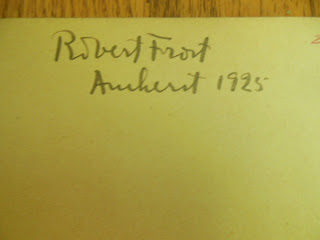 Blogging, like a lot of other stuff I can think of, is not as easy as you’d expect. All weekend I was dying to tell you my latest adventure, but lacked the time to do it. So early this morning, the second I slapped the last label on the last order to be shipped, I was  in here banging away on the keyboard. I wrote a good half  of it  before it finally dawned on me that it had about as much zip as  the legal notices in the classified ads of the newspaper. So I hit the delete button and started again. Now an hour has slipped by and I’ve hit delete not once, but TWICE. So here we go a third time. At the very least I guess we can judge the veracity of that old saying about the third time being the charm.

As you know, I was jazzed up like a player piano to get to Saturday’s book sale because last year I made two great finds there. Of course I know all about lightning never striking in the same place twice, but when a bookseller imbues a sale with magical thinking there’s not an adage in the world that will disabuse her of the notion. As I took my place in line three words looped around in my brain like an endless tape – one fine thing. All I wanted was one fine thing.  There we were basking under a Cleveland sun at the end of a week that consistently predicted a 70 per cent chance of morning storms. Our favorite sellers were all grouped around us which made short work of the three hour wait. AND the crowd was noticeably smaller than usual. All omens looked good!

The first thing I noticed when we entered the sale room was the lack of an antiquarian and collectible section – the favorite of my favorites -- so I headed to art instead and immediately scooped up a few books and  catalogues. They did have some specials , but I had a hunch that  the one I wanted wasn’t a good idea  -- which proved to be dead-on right.  Eric told me later that a scanner zapped it and it was overpriced by $125!!!! Today is reduced  price day and I’m going, but you can bet that even if it’s a full half off (which it won’t be) I  won’t be selling a gorgeous kimono book any time soon.  But getting back to Saturday’s sale, I wended my way through architecture, music, cookbooks, children’s  and Ohioana buying one book here and two there, all of  which were nice enough but still  not my ONE FINE THING. Even literature bombed and I love the literature section. I couldn’t even scare up a nice set of classics for the antiques mall.

By this time the only place I hadn’t been was religion, a topic I’m very picky about so I rarely get anything other than Judaica which I do  like. But instead of making tracks over there I spent awhile talking to Keith, the nice bookseller I met last summer at a Cleveland estate sale and suddenly keep running into a lot. Since neither of us felt much urgency we talked as we desultorily looked for stuff we might have missed in the children’s section. After that I finally did hit religion, but I never really looked at the offerings because right away I ran into my friend Patrick who asked me how I was doing.

“Not all that great,” I said. “I got some stuff, but nothing really good.”

“Did you see the signed Robert Frost?” he asked.

The WHHHAAAAT???? No, I hadn’t seen any signed Robert Frost -- which might be because it was buried in a box that looked like another buyer’s book receptacle. Immediately I ran over and asked the woman working there who knows me well from the old antiquarian section if she still had it. Yes, yes,  yes – NO! Just as the worker she sent to fetch it reached for it another buyer picked it up and added it to his stack. And just like that -- the gig was up.

“Wait -- don’t leave,” the antiquarian category woman whispered to me. “Just wait and see what happens. There’s a good chance he didn’t see the price and will flip out when he hears it’s $200.”

I doubted it, but dutifully waited. Whole Ages passed as he continued to browse, looking  at this book, looking  at that one, and adding a few more to his box. I can’t recall why I didn’t see him check out, but Eric told me later that he did exactly what the  woman predicted he would do. In a just a few seconds, I got my one fine thing after all.

Later that evening I thought about all this and suddenly remembered a side conversation I ‘d overheard as we waited in line. I can’t remember what brought it up, but one of the scanners, whom I initially liked until he went over to the dark side, was explaining how dealers can manipulate prices and with cunning and laser sharp timing wring  big money out of a given book whether it’s worth it or not. I listened for a moment and quietly said to Peter, “I really don’t like that.”

Which is not to say we’re saints, you understand, though we do respect the books, play fair with the customers, and even help each other. But we’re also competitive – to say otherwise would be lying through our teeth. Just stand on the sidelines of a sale and watch what happens when the doors open. All along the line conversations fall off in mid-sentence. If words were tangible the ground would be so littered with them you’d be kicking them up on the way in like dry leaves in autumn. But, even so, many booksellers have shared their knowledge with me over the years and I try to return that same generosity of spirit.

As for the  Frost book, I’m thrilled to have it. I’m practically giddy over it! But I’m also pretty sure that the world would have kept spinning even if the other guy got it.

The second Patrick told me where to find Frost I had my one fine thing.. It just it took me a while to get it.
Posted by tess at 9:04 AM 9 comments: