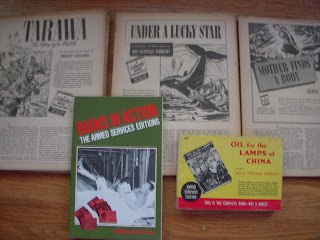 During WWII shared sacrifice extended to all corners of daily life including how people indulged their bookish inclinations. We’ve all seen older books of the period in a smaller format accompanied by the caveat that the petite size was due to the need to be patriotic and conserve paper. But a smaller size wasn’t the only change in the look of books in the 40’s. Soldiers got oddly shaped paperbacks and Liberty Condensed Books provided readers with hyper-condensation. Each “book” was an oversized pamphlet of about 16 dense pages designed to be read in a single evening. Both text and cover (such as it was) were printed on cheap rag paper and came with a crossword puzzle on the back in case you were a fast reader and had some time to kill before calling it a night. Those of you who’ve been around awhile may recall that a few years ago we bought from the estate of a guy named Elmer an incredible number of books (35,000 in the first go). God love him, he hoped to one day haul them all out west and open a store, but he died and never got the chance to run up a whopping trucking bill. Anyway, Elmer was an equal opportunity book buyer. He bought what he liked and he liked a lot of things – the superb, the good, the bad, the ugly and the quirky. It’s that brave show of quirk that I liked best about Elmer. 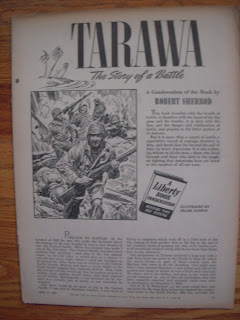 These Liberties, of which I have around fifty pieces , give or take, came in their entirety from Elmer’s stash. For years I’ve had them stashed myself in the closet for the simple reason that I can’t find out anything about them. But I do think they’ve overstayed their welcome so the whole lot is off to the mall to be sold as a single unit if at all possible. Notice that one in the main photo on top was written by the famous Gypsy Rose Lee, though as I recall, her fame had little to do with writing.

I DO know about the yellow and red paperback in the picture below though and thought I’d share some info in case you ever run across one, or two, or three of them. Some of them used to be fairly collectible, but I wouldn’t hold my breath on it now. Still they’re an interesting piece of history. Ever wonder why they are wider than they are tall? What’s with THAT? Why not just print a regular paperback to fit in a knapsack and be done with it? Wartime economics – that’s why. These books were printed on rotary magazine presses designed for a larger format, so they’d print two books simultaneously (they called it printing two-up) and slice the page in half horizontally. I did a little fact checking this morning and learned that between 1943 and 1947 123 million rolled off five presses. But there were only 1322 titles involved, which sounds like a small number to an avid reader, though may actually be a lot when you consider how little leisure time the audience actually had. 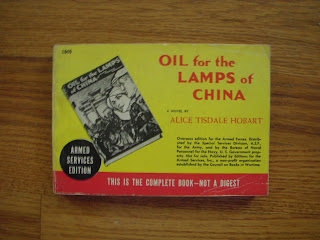 I got to wondering this morning how the books for troops program got started, so I poked around a little in that other book up there in the picture (the green one ) and learned that it was the bright idea of an army officer named Ray Trautman who headed the Library Section and a government graphic art specialist named H. Stahley Thomspon. The pair hauled the idea over to the Council on Books in Wartime which was comprised of the leading publishers of the day. The publishers offered to help, but extracted an agreement that the project was not to include text books, science or technology. In the end it ended up being an amalgamation of bestsellers, classics, genre fiction, history, and poetry. The books were distributed by the government which bought them at six cents a book plus ten percent with a half per cent royalty going to both the publisher and the author. One patriotic and better heeled author, Irving Stone, offered to give up his royalties for the cause, but the Council turned him down flat because most authors needed the money!

Both the Army and the Navy got the final say before a title was approved, but the broad guidelines included the following: nothing offensive to the Allies or to any racial or religious group, and of course nothing that would aid the enemy. Other that it was supposed to be fair game, but of course there was plenty of political nit-picking over what that meant. One of the books that got the boot was Zane Grey’s Riders of the Purple Sage for attacking Mormons. Later, Robert Taft, who was running for office at the time got a bit of legislation passed that caused censorship to rear its ugly head. In the end seventy tiles had to be abridged to -- as the Irish so colorfully put it -- “take out the mucky bits.” These included everything from Moby Dick to Forever Amber. If I’m not mistaken the Catholic Legion of Decency didn’t care for Amber too much either. I bought a copy in Ireland back in the 70’s and enjoyed it greatly while holed up in a nice hotel in Killarney with the worst sore throat of my life.

But that’s another story and I already told it here anyway. So what do you think was the first book shipped out to the troops? Bet you can’t name it! I couldn’t either. Anybody ever hear of The Education of Hyman Kaplan by Leo Rosten? I thought not. It certainly didn’t make the fan faves list which included Betty Smith’s A Tree Grows in Brooklyn and anything by Louis Bromfield and Kenneth Roberts. The reason some wartime titles became collectibles is the fact that they appeared in print for the first time in this format – two of which include Faulkner’s A Rose for Emily and Other Stories and the Selected Short Stories of Ernest Hemingway.It’s strange how so many red and yellow books were printed and yet so few have survived. It’s been attributed to action on the battlefield and abandonment when the soldiers left the war zone to return home. In fifteen years I have only seen the occasional title and ALWAYS on the “specials” table at an FOL sale, but I never bought one. So how then did I get this one?

P.S. I just had an email from a military historian who tried very hard to get the robot who keeps watch over my comments to let him through, but it refused. So here it is: "An advantage to the Armed Services Editions was that the short spine didn't crack or break when stuffed in a pocket." Good to know that economy reaps unexpected rewards!

I'm always struck by the commitment made during World War II to bring the national focus to the war effort, from rationing and recycling to printing special editions of books.
And for a war that lasted four years, which sounds short by today's standards. Fascinating stuff!

It really is interesting. I hadn't thought about it much until I had all these items together. It seemed like they were trying to tell a story. And sure enough, they were!

You know who would enjoy these books? James Banks, creator and director of the Crile Military Archives.
In fact, I'm going to mention these to him when I see him next. He is fascinated by anything connected to World War II.

I agree. If he would like them he can just have them with my compliments. Jim is a great guy and I know they would be well cared for and even used for educational purposes. Great idea --I never thought of it.