Well, here it is high July and I am so foggy from fibro I think my brain has turned into mothballs. In the past two weeks these things have taken place: 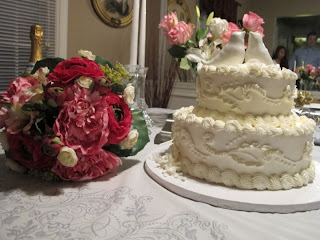 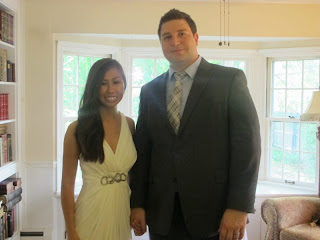 Our youngest daughter Catie married her boyfriend of eight years, Joseph Han, in a very sweet and simple ceremony at which, by Catie’s request, her father and I renewed our vows after 43 years almost to the day. The Fourth of July quickly followed so the newlyweds stayed on and the Michigan crowd came back to participate in further merriment which included  tons of food, a yardful of friends and family, and the city’s hands-down best fireworks show EVER. And that was just the 3rd. The Fourth found us at our family lake (as opposed to the one behind our house) where we did the same stuff all over again only with a whole new cast of characters. 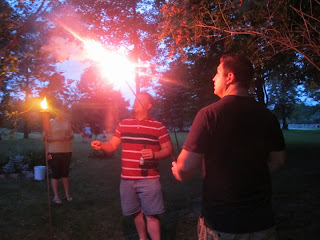 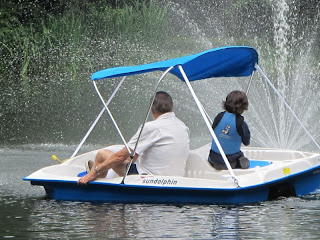 The third -- or is it the fourth? -- thing that’s gone on is nothing I can snap a picture of because it’s hard to take an after picture when you neglected to take a before. So you’ll just have to take it on faith that I have worked like a demon diminishing the piles of books on my office floor in hopes of making room for some new ones. And speaking of new ones, somewhere in there I went to two estate sales – one in a 5000 square foot Tudor mansion built in 1927 and the other in a cute little Western Reserve farmhouse built in 1830. Between them I got 12 California prints, one Ohio book for the antiques mall and a giant box filled to overflowing with spools of ribbon -- additions to what my friend Darwin always calls my ribbon collection. Anymore that’s about what it is too, as I have enough ribbon  in the basement  to wrap up a good-sized library. Name your color and I’m good to go.

Most of the books on the floor proved disappointing, though there WERE a few bright spots, but the fact is I have way more ephemera than I do books. I am trying to get my second website for the ephemera up and running, but Chrislands is holding a sale and are likely swamped, as I haven’t heard a peep from them.The good news is there are two sales tomorrow. One is in Cleveland, the estate of a former bookseller, but I’ve heard that his son may be reopening his late father’s business and has already retrieved what he wants for stock. If true, I don’t think I’ll have to worry about whirling and twirling with joy, which I suppose is good because foggy as I am I’d probably crash into  the stacks anyway. The second sale is that rural one I like that forbids scanners. Two sales ago I got a very fine book, there, but the last sale proved drearier than usual – my total outlay was around $20.What keeps me going back is a single memory -- seven dark oversized books with shiny  gilt on their spines spelling William Vollmann,  Rising Up, Rising Down.  It was four years ago but those babies remain branded on my brain. I bought them, sold them in a month for a three-figure price, and never saw another set since.

The other thing I’ve done these past weeks is continue  to thin the herd, aka the books in my inventory, which I do believe is a worthy use of time. I raised a few prices, dropped many more, and delisted all the low end stuff I don’t like. It’s paying off too as I made at least six very good sales on previously dead stock.  A few things such as these: 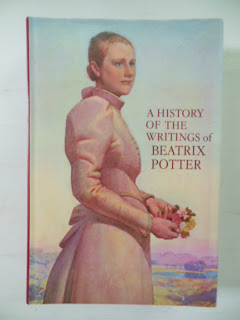 I squirreled away in the closet because they’re fine books no matter WHAT people online price them at. Both are in beautiful condition – a hard cover first edition  from the 60’s  and the paperback from the fifties marked first Japan printing.  I guess I’m getting a little cranky in my old age, but I hate it when beautiful, finely made books with serious content are treated like bottom feeders. I wonder if those sellers even know who Lafcadio Hearn was.

Overall it's  been a fun, if somewhat foggy,  time, but the bottom line is this -- sales are slowish this month even for summer. If the chat board at ABE is any indicator  I sense a lot of company. I’m okay(ish) online, but my mall sales are very disappointing. There’s an old adage in the antiques world – “in July you die.” But at our antiques mall July is usually better than Christmas. Thanks to travelers passing through for the Fourth and the Medina Antiques Show, July rocks and rolls.I don’t know what happened this time, but both weekends bombed. It’s the worst month I’ve ever had in two and a half years there. That being said, I’m not realy worried about the big picture, just rather miffed about the small one Besides, I  have something to blame it on.

Somebody bought the chair and now there’s nowhere to sit!
Posted by tess at 1:42 PM

You lost another chair? They love your furniture at the Mall. Gorgeous photos. I wish you luck during the rest of July. You always do well for me. P.S. Thanks for my latest purchase!

First the rain kept buyers away and then the heat is my theory on slow sales. My Etsy shop is dragging and I'm not even getting all those folks who love to "favorite" but never buy.

Hang in there -- I had a bang-up good day at the mall yesterday (made up for a lot!) and today bought a TON of good books. Isn't there a song about that -- "what a difference a day makes?" Keep humming it.