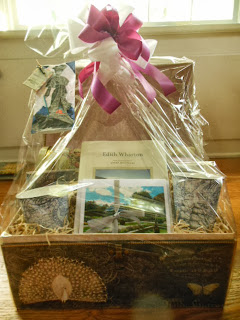 I know – I keep promising better behavior over here and never seem to produce it. But perhaps if you understand what I’ve been doing these last weeks you might forgive the Haphazard Blogger her inactivity. Those of you who have been around awhile know my steadfast devotion to the Akron Book and Paper Fair each spring. Well, this year the Cleveland fair, which is also produced by the Northern Ohio Bibliophilic Society, ran into a problem with their venue which ended up taking longer than expected to resolve. Consequently, by the time all systems were GO they had only about eight weeks to get ready for the fair. To put that in perspective we’ve been working on the Akron fair since June and it won’t  be held until April. Fortunately, a lot of smart people pulled together, I jumped in and joined them, and off we went, each doing what we could to promote the cause. The fair was held last Sunday and  if you didn’t know the back story you’d never guess the above -- it went off without a hitch.


I, on the other hand, did not.. From the start it was a comedy of errors with very few laughs emanating from this quarter. One of my duties was to make the door prize gift basket, something I have done for the Akron show four years in a row and countless other times for various charity auctions. For this show I chose a book about a sea cruise taken by Edith Wharton titled The Cruise of the Venadis. My friend Ginger, a professional level photographer who lives in upstate New York not far from Edith’s mansion known as The Mount, shot a series of eight gorgeous photographs which she turned into one-of-a kind notecards. To them I added an Andre Bocelli opera CD, some tall tea mugs decorated with blue maps, a tin of English tea and various other small luxuries and placed them all into a paper-covered cardboard steamer trunk. The trunk had cording on either side which should  have insured that the lid would stay open. But while I was gathering the goodies said lid spontaneously crashed, ripping  out the cording and tearing the liner paper on its way down. As you might guess, the descent was greeted by a volley of very colorful screaming.  Once I returned to sanity though I realized that the only solution  was to re-engineer the entire thing, a process which involved the drilling of holes, the insertion of new cord, the collaging  of torn paper, and the inevitable rending of garments. In the end it was fine and the card I made was able to hang from the top as envisioned  So I  took a deep breath and began packing for the fair. 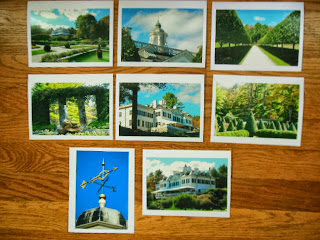 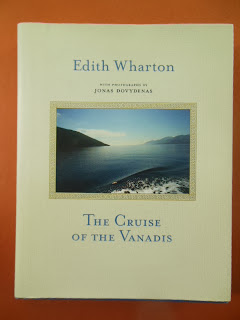 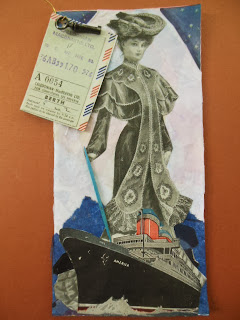 All week I worked like a maniac readying books, bagging ephemera, and pricing postcards. By Saturday night everything was packed and Eric loaded it all onto the truck. Sunday morning found us on the road at six a.m. headed to Shaker Heights in high spirits. (Well, one of us was excited anyway.) But, alas, even that was short lived. As soon as got  our two tables of books set up  disaster struck. The huge plastic tub of ephemera sat alone in the basement at home, a full hour away! So get over it  you might say --  make do. But I could NOT get over it due to an earlier problem I failed to mention. When I signed up to exhibit I had requested an end booth which would allow me to clamp my ephemera boards to the third table and display paper on both sides. My request had been forgotten though and by the time I realized it it was too late. So I decided to give up one entire table to ephemera and take less books --  which means  that without those books I had a totally empty table.


Fortunately for me, Eric is not a whiny husband. With the keen logic  of a rocket scientist and with no hysterics required, he grasped the severity of the situation immediately and  flew out the door headed for Medina. Meanwhile back  at the venue  I paced  the exhibit hall vibrating like a tuning fork for two solid hours. Promptly at ten the fair officially opened  and people glanced at my long empty table and moved on.  But very shortly our hero returned,  a latter day Superman bearing a Rubbermaid  bin. Why, I wondered, did everyone not notice this incredible feat? If ever a man deserved a standing O this was the one and yet they continued to browse for books. Oh well. The sale commenced and people bought things from us, including some of the forsaken ephemera.  But was it our best fair? No, it was not. Was it terrible? Well -- let’s just say it was almost respectable and let it go at that.


Ah, but here’s the thing ! We CAN’T let it go at that  because one last disaster still lurked in the wings. As soon as we pulled into our driveway after the longest day in book fair history  I hopped out of the truck in high heels  from a very high seat and twisted my ankle. It seemed a little ouchy, but, basically okay, so I walked a few steps and -- with no warning --  dramatically fell to the ground, slamming  both of my old lady knees on the concrete. The neighbors across the street had a wonderful view of this, but at least there were no broken knee caps and no trip to the E.R..  Just a bruise on one knee  the size of a baseball and tenderness to both of them.


There was nothing just about any of it.

You survived! Barely. I have a craft show Sat. And I hope I don't repeat any of your mishaps.

I wouldn't recommend it!. You definitely need none of these things. I have never had such a domino effect around a book fair. Mostly I have done fine and the last time before this VERY, VERY fine. I guess you can't win them all. But good luck with the show! Wishing you the best.

Moral of the story: No good deed goes unpunished?

Could be, but I hope not!

It was a very overwhelming time for you. Hoping for a much calmer November all around. Thank you for posting the cards of "my little snapshots." You are very kind.

Thank you, but I think I was bragging about my talented friend! :-) I could, however, stand some peace and quiet! I agree with you on that!