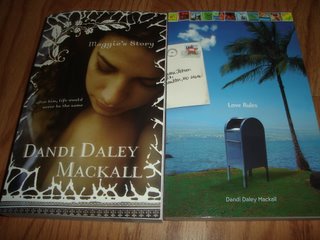 Yesterday I did it -- went to check out the new bookstore in town. Our once small city has finally come of age I guess, as Border's recently moved in. Not downtown, thank heavens, where the picture postcard Victorian store facades march in a perfect square around a leafy park crowned with a magnificent white gazebo. No, they're out north where strip malls and fast food joints litter the road on both sides. Wal-Mart, Home Depot, Kohl's etc. push up out of the earth to join them like toadstools after a hard rain. Ugly, yes, but nonetheless vested with the inalienable right to exist.

It's not that I never patronize SOME of these stores. I do, and sometimes I even enjoy it, but a part of me always feels traitorous too, as their presence makes it harder for small businesses to not only thrive, but to stay ALIVE. Collectively, they also wash the landscape of America with a coat of the same bland paint. Gone are so many vivid, hand-raised businesses that have been part of families for generations. I could weep over that loss and all the losses to come if I allowed myself the luxury of it, especially since I am ever cognizant of the fact that even internet businesses can be torn assunder by the Big Guys. Unfortunately, it was in that frame of mind that I opened the door to Borders.

The first thing that came to mind was Hemingway's short story, "A Clean, Well Lighted Place." Borders is indeed that -- clean and well lit. First I checked out the shelves to see how many copies of my friend Dandi Mackall's books were stocked. I found a reassuring four, one of which was even shelved face out. I didn't bother looking for copies of my own books, as I knew there wouldn't be any. After that I quickly bought a copy of Anne Tyler's Digging To America, and left. No coffee bar for me -- I'd had enough sampling of the wares for one day. Will I be back? Probably. No, not probably, The answer is yes, I will. It's the only game in town. But it has left me with a sense of sadness that has spilled over into today. How I long for an old-fashioned bookstore with a little bell above the door, shelves crammed and jammed with a smattering of everything -- bestsellers, oddities, new voices we ought to hear but don't because their books never make it to the shelves -- the same, familiar face or faces behind the counter, stimulating conversation, a bookstore cat of fine proportions and, no less important -- the sense that we are HERE in Medina, Ohio, and not Anywhere, USA.
Posted by tess at 2:39 PM