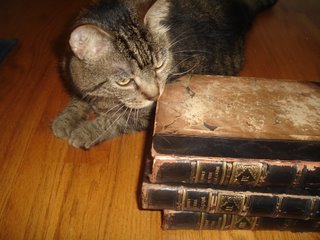 If, at this moment, you were perched in a large tree overlooking the office window, you would see a small woman sitting at a big desk typing like a maniac with her two middle fingers on a non-ergonomic keyboard. A couple incarnations ago I used to be a newspaper reporter who somehow never really mastered the art of touch typing. But since ow the words get on the page are less important than the meaning they impart, I won't indulge a sudden surge of nostalgia for my beloved Royal manual typewriter bought at a farm auction in the 70's. The beast weighed more than I could carry, but the pleasure of pounding on those perfect shiny keys and zinging that carriage return convinced me that I might produce a bestseller. I never did, of course, though I did do a lot of writing, got published, and even wrote some books that are still in print.

However, over the past ten years of being both a bookseller and a writer, a quiet metamorphosis took place. In fact, it was so quiet I never really noticed until one day someone asked me what I did for a living. Always before I would reply that I was a writer who sold books. But that day, without thinking, I said that I was a bookseller who did a little writing.

Sometimes.
Under duress.
When her writing group was meeting.

Wow -- talk about shocked! I was stunned by the words -- not only because I knew they were true, but because they made me much more uncomfortable than I wanted to admit. It felt as though by choosing book selling over book writing I was selling out on the old dream of becoming an author that had literally grabbed me by the collar on my first trip to the library at age six. It's taken a long while (and I'm still not entirely there), but I'm beginning to get the picture that dreams are allowed to be reshaped. Pretty soon I'll even be able to admit that I'm totally in love with bookselling! Who knows? Maybe it'll even in my next post. :-)
Posted by tess at 10:26 AM

Isn't it funny how life has a way of pulling us in a direction we weren't expecting? I discovered bookselling walking down a crowded downtown street, and never looked back. I heard about your blog on the bookthink forum, keep it up, it really is wonderful.
Michael

Oh, Michael, thank you! I just found your note. I rarely scroll backwards, but did tonight, as I have been away from the blog for several days with the holiday and needed to reacquaint myself with myself! Will try to post a new one tomorrow.