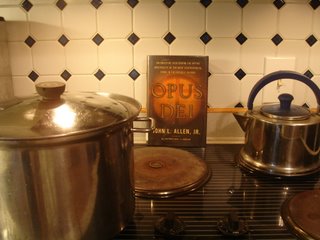 It’s late afternoon, Saturday, the day I had set aside to transform myself from bookseller into domestic diva. It started out well enough – did the laundry, changed the bed linen, emptied the dishwasher and made a double batch of tarts for my niece’s wedding shower tomorrow. But no sooner were the “have-tos” done than the Martha Stewart in me took off her apron and headed south. I’m in a decidedly melancholy mood today, brought on by two phone calls and a couple odd things I’ve been thinking about all week.

First, the odd things. I was reading John Allen’s book, Opus Dei, which is about the secret Catholic organization Dan Brown made famous in The Da Vinci Code. To be honest, I thought Allen would serve it up on a gold-plated paten with a side of pap, as he has ties to both the Catholic press and the Vatican, but I was wrong. It’s a pretty even-handed account, which in summation, seems to insinuate that while Opus Dei isn't as heinous as you might think, it's not exactly the local Kiwanis Club either. Of course I may be wrong about that, as my "recovering Catholic" sensibilities recoiled somewhere around page 153 and I never finished the book. I thought about it some, but it frankly it gave me the creeps, so I tossed it into the primeval stew of my subconscious and thought instead about how tortunous it is for me to not finish a book once I start reading it. This led to a memory of the summer I was ten and tried to read every book in the library, but never got past the first shelf of A’s because every time I went back there were always new A’s.

For the rest of the week though every time I passed Opus Dei lying on a table in the family room it caught my eye. First I’d think about the creepiness, then I’d feel a stab of guilt for not finishing it. Then, invariably, I’d remember how ten year old me actually thought she could read herself around the children’s room of the library and a wave of sadness would lap at my feet.

Then this morning Jessica called and somehow we got to talking about my family of origin. We like to rehash stuff we already know, Jessica and I, just in case there might be a nuance we hadn’t chewed over in the last 25 years. There didn’t appear to be, but I still hung up feeling sort of off-kilter. A couple hours later, while I was making the tarts, Laurie called to see how our friend Nancy is recovering from the complications of a hysterectomy. Since the news is good on that front, we wandered off onto a bunch of other topics and finally settled in on me not writing anymore, which led Laurie, whom you may recall is a fellow writer, to launch into a passionate speech about why I need to start.

I wish I could recall exactly what she said because it was really good. I know this because her impassioned speeches about writing are always good. It's just that this time I got sidetracked by the fact that though none of her words implied any of these things, every single one contained in its nucleus Catholicism, guilt, and the innocence of my ten year-old self yearning to read every book in the library.

Pass the primeval stew, please, and hand me a big spoon. This may take awhile.
Posted by tess at 5:20 PM