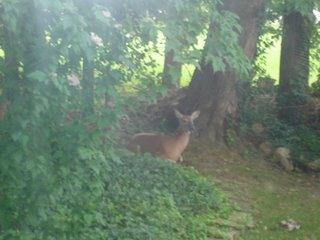 I’ve mentioned before how, for some inexplicable reason, something seemingly innocuous will happen, and I’ll hang on to it like it was my last dime. Well, it happened again and it’s partly why I haven’t written anything new lately. I’ve been trying to figure out why in the world a deer, albeit a gorgeous one, has become my latest mind stalker.

It all began last week when my writer’s group met, as they often do, at my house. I was tidying up a bit before their arrival when I looked out the expanse of bay window in the living room and nearly cut an antique table off at the knees with the Hoover. There, not six feet from the glass, stood a magnificent deer sheltered in a stand of trees. It’s not that we haven’t seen deer in the suburbs before – they flit by on a regular basis these days. What they do NOT do, however, is stand at attention in front of an open window in broad daylight staring at me eyeball to eyeball while the vacuum cleaner’s roaring like a race car engine! Once I got over the surprise I managed to finish cleaning and dash upstairs for a quick shower. At first I hated to run the water for fear of scaring off my visitor, but it didn’t prove to be a problem. In fact, afterwards I even decided to say something to her (never mind what) out the bathroom window. All it elicited was a minimal twitching of the ears.

By the time the writers showed up a full hour had passed and all that had changed is that the deer got tired of standing and had the good sense to sit down. Dandi and Laurie, unlike me, are country girls, so you’d think they’d see this sort of thing all the time, but I guess not, as they were over-the-moon enchanted at the sight. I thought the deer exuded a feminine presence myself, but Laurie, who is decidedly more interested in body parts than I am, was convinced it was a male. I suspect now she was right, as the whole thing ended up being a one night stand. Every afternoon and early evening since, I’ve looked with great expectancy out that same window only to be disappointed.

As I’ve thought about this odd event all week it brought back another event I’d almost forgotten. Some years ago when I wrote a lot for the Akron Beacon Journal Sunday Magazine I was sent on assignment to interview an ex-Dominican nun who purportedly communed with higher beings and was able to conduct conversations with her clients' guardian angels. My friend Jessica, who has always had a yen for psychic dabbling, went along as my assistant. To tell the truth, it was a little disappointing at first. Except for the Egyptian music being played in the background for a cat who was in labor in the laundry room, the angel psychic was about as exotic as a soccer mom. I asked questions, she politely answered. At one point she grabbed a sketchpad and started drawing furiously with colored chalks, but the interview continued seamlessly, so I thought little of it. Wen she finished drawing, she tore off the masterwork, and handed it to me.

I glanced at it and then over at Jessica whose eyebrows by then had shot up to hit her hairline. To the left of the page lay a blue lake, to the right a gazillion trees. A stone path wound through the center bordered by drifts of daffodils. In the foreground a magnificent deer stood at attention gazing straight out at me. Minus the deer, the soccer mom psychic had just whipped off an exact rendering of my backyard!

“Wh-what does this mean?” I asked, a bit disconcerted.

And so it was, though I never really did. For a day or so after the interview I tried in a half-hearted sort of way, but then promptly lost the artwork and forgot all about it. Now fifteen years have passed and here I am suddenly thinking about it again. Crazy as it sounds, I have to wonder if the chalk drawing is somehow mystically connected to last week's deer.

I think Carl Jung's been stalking me too.
Posted by tess at 1:04 PM

Tess, you've made a graceful vision into an even more graceful blog. Thanks!

Reminds me of the dream I had about 10 years before I met hubby!