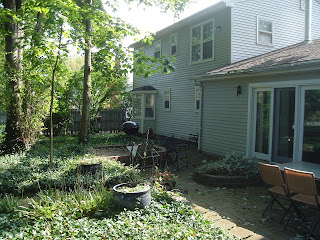 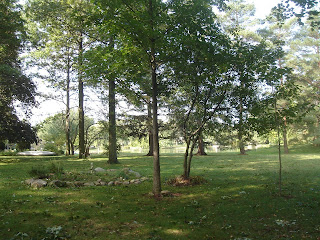 The last breath of Hurricane Ike blew over the Midwest rather spectacularly on Sunday. Nancy and I usually walk five miles on Sunday morning, but decided to delay until afternoon to get a few things done at home. Nancy showed up around five and almost immediately the many trees in my backyard started rockin’ and rollin.’

CRASH! The outer door of the screened porch flapped in the wind like Sarah Palin under the scrutiny of Charlie Gibson. Porch trees and plants fell like dominoes and one of several small decorative windows at the top of the screens imploded, leaving the brick floor littered with blue glass and smashed wood. I grabbed the door while Nancy saved a decorative stained glass panel and together we moved all the furniture as far back against the wall of the house as we could. At this point Nancy decided maybe she’d better make sure her own hatches were battened down and made a dash for the car. I stood at the door in amazement and growing apprehension. Our trees are not saplings. If they fell … My next thought was my husband who was in Indiana doing an outdoor show for his business. According to the Weather Channel, Cincinnati was hardest hit and he was but one hour away from Cincy.

By the time Ike gave up the ghost power was out in much of the area and the yard looked like a war zone. Eric had managed to get through on his cell phone earlier and all was well in Indiana, though the connection was so full of cracks all I heard was “me … okay now … okay?” By ten p.m. I had the glass cleaned up on the porch and Mickey the cat ensconced once again to take in the night air. The real work began yesterday.

By eight I was outside with a stack of leaf bags and a rake. A huge branch I’d heard glance off the office window was now impaled in the fence. I may be a hundred pound weakling, I but sang that old Helen Reddy song in my head “I am woman, hear me roar …“ and wrestled it out and around the house to the curb. Meanwhile next door, a crew showed up at the neighbor’s house to perform the same ablutions. I chatted with the workers awhile and then we all got down to business – they with their rip-roaring machines and me with my rake and leaf bags. The day was dank and overcast, but a sudden flash of joy filled me from the top of my head to my sandaled feet. We made it! We survived! The wet leaves and debris smelled fresh and earthy and I breathed in their scent glad to the core of my being that I was out there doing what I was doing.

Not long after this, the owner of the house with the crew strolled outside with his coffee for a chat. I know he thinks I’m a tree-hugger and he’d be right about that, especially since it was my trees that had left their body parts all over his bare, green expanse of lawn, but I think he sort of likes me anyway. We talked about the damage and I said, “There’s sure a lot to be done out here, but then that’s the price of paradise, right?”

“Well, I wouldn’t say THAT,” he replied.

I guess paradise is wherever you find it. For me it's right here on this street in this town in Ohio.
Posted by tess at 9:58 AM