Cooking In the Storm 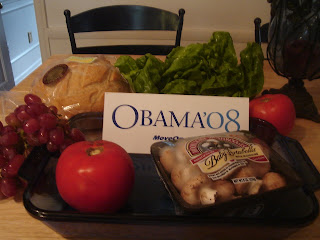 It’s a dark, damp morning, the day after the first presidential debate, and I am writing my grocery list in my head. The house is still, the silence all-encompassing, a microcosm of the silence of a nation holding its breath. My fears today are many – some justified, some no doubt extrapolation – but I seem unable to delineate one from another. And so I do the one thing I know how to do in both good times and bad. I cook.

My little grandson, who came to us four years ago by way of south Korea, is four and half now. He’s in kindergarten where he’s learning to recite the Pledge of Allegiance. The big words are tricky and the concepts mud puddles. But he stamps his feet in them and splashes until he’s drenched with their majesty -- the rest will come later. For now it’s enough to put his hand over his baby heart and cut to the chase, “Flag of the United States of America! Liberty and justice for all!”

Early this morning I saw two deer. In the space of time before the sun has fully risen deer blend so seamlessly with the backdrop of trees they are nearly invisible. If you want to see them – really see the grace and shape of who they are-- you have to look hard. If you focus on their color you’ll miss them every time.

Words tumble over words in my head, but I can’t bring them to my mouth, can barely force them out through my fingertips. I should be out canvassing the neighborhood, signing up voters, working the phone banks. I’m a world class talker – ask anyone who knows me. I could talk the legs off a donkey and sell the pope a double bed, but right now all I can do is cook. So I will do that then. And when I have chicken, and rice pilaf with mushrooms, salad, and bread, I will pack them all up and take them to the Democratic party headquarters to feed the young volunteers who are here from Chicago, Rhode Island and California. They crash on family room floors, eat whatever presents itself, work until the wee hours and then repeat it all over again day after day. They breathe life into the words my grandson shouts and the ones I can’t articulate.

I am silent today. My voice is stilled by anger, but mostly by grief. I am sick over what’s happening to our country, sick that Barrack Obama must contend with the circus his opponent is trying to make of the election during a time when our country is literally cracking open like an overripe pomegranate. We are bleeding, we are gushing blood like a geyser, and his opponent and the woman he is using for his own selfish means, are apparently insulated from the spatter. But we are not insulated. We are black, and white, Asian and Hispanic, sick and well, Christian and not Christian, straight and gay, poor and middle class, employed and unemployed, young and old. If we don’t succeed in making a difference this November we will continue to have no buffer from the raging storm of greed and lies they so neatly couch in words like faith and Christian. The last safe haven may be this kitchen. And so I will go there today and cook for Barrack Obama.
Posted by tess at 10:59 AM

Beautiful. You should be writing books as well as selling them.

Oh, what lovely thing to say. Thank you so much. I have aspirations, but who doesn't, huh?

Do come back again!
tess