Two Booksellers and A Truck 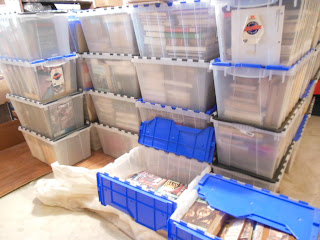 As I write this my garage is packed with plastic bins of books, all bought last Monday from a semi-truck. I promised I’d tell the story of how they got there, so here goes. It’s not especially dramatic, but then again I never in fifteen and three-quarter years in the business bought books from a truck, so there IS at least a novelty factor. Of course the day we made the deal was probably the “noveltiest”. Retrieval day a week later not so much. It’s January in northeastern Ohio which means the air felt like the breath of a Nordic war god huffing and puffing to blow down Britain. By the time we transferred 85 plastic bins of books from the semi-truck to our own truck my toes felt (and looked)like ten frozen grapes. I’m not complaining. Well, maybe I’m complaining a little after climbing four giant ice-slicked steps into the semi, especially given the fact that the second to the last step required a gargantuan two-foot haul to the top!I think I’m entitled to at least a small whine over that. I'm not exactly an Amazonian woman.

But getting back to the beginning – a couple weeks ago an attorney came into our store and inquired as to whether we would be interested in a semi-truck full of books. Eric is game for anything. He’d retrieve books from a donkey cart stuck in a Central American rain forest. So of course he told her we’d love to see them. I, on the other hand, responded with a mixture of excitement and skepticism. Before you tell me it’s not possible to be both excited and negative at the same time, I assure you I wasn’t. I see-sawed back and forth between the two emotions for three days. Depending on who I was talking to it sounded either fun and fabulous or stupid and a waste of time. Interestingly enough, It didn’t turn out to be either.

I don’t know what it is about us. Whenever there are a lot of books ranging in condition and subject from superb to landfill located in a less than charming location the Universe sends them to us stamped Express Mail. This is the fourth time I can think of that we encountered a hoarder situation, but I’ve also probably repressed a couple minor ones. Anyway, the previous owner had the semi-truck in the backyard so when the house got too crowded with the various other things he collected he stored the books in plastic tubs, stashed them in the truck, and there they stayed until he died. His interests were pretty varied, but if pinned to the wall I’d say the primary ones were these: art glass lamps, collectible canes, music and musical instruments, horses, horse racing, book collecting, gambling, guns, antique and vintage cars, home building and, oddly enough, interior design

.The good thing about all of this was the fact that the very best books – and there actually were some – had managed to escape confinement in the truck, though the truck itself was less problem than the way it had been packed. Several good titles landed in the dumpster because their owner had stood them upright in the bin and crammed many more upright at a diagonal around them. Several ended up so warped you could have used them to carry in kindling. Fortunately, we had access to a large on-site dumpster which the attorney understood we would need, but this also meant that every bin had to be opened, winnowed, and repacked. We went from 130 bins down to 84 in five hours.As you can see form the photo above, we have them home and neatly stacked. I’ve already been through not quite half (there are some more down at other the end of the garage by the doors too). But I’m in this operation deep enough now to know that despite the junk and the low end stuff I would never buy individually we will still do fine. Primarily this is because we have a unique three-tiered situation which makes such buys work for us. The best items (which right now amount to just two bins) will go online. The next tier will go to the mall and the rest to the store. I wished on an entire constellation of stars that every book in every box or bin would end up being mine so I can breathe easier for a few months about inventory. But clearly it’s not going to happen.

In order to get the goodies, however few in number, I apparently need to WORK.

P.S. Blogger is still not acepting pictures normally. I had to WORK to get his one here and was reluctant to push my luck with more. So if, and when, it gets fixed I'll show you some of the good books.

Sounds like a lot of work but fun too with the treasure hunt progressing. Glad they were in plastic bins.

Good grief, no wonder you stay so trim and I have to go to exercise class.! I still think it sounds like fun to open each bin but I would have wished for a beautiful autumn day not this weather. Any illustrated ones that are past copyright restrictions?

No illustrated ones like that because not many older books at all, except junky ones. Mostly these are newer, Cheryl -- 80's 90's, early 2000's. The ones I kept are primarily about antiques and music, but there's some other stuff too. Who knows what will turn up?! I will keep you posted.

Hilda if it weren't for the bins I wold have only the one bin from the house. The rest would have been a mess. It is fun really -- just disappointing when they're not all keepers.

You are so lucky in the owner's interests. It could have been politics, self-help books, book club fiction, etc. Good hunting!
Andrea

Indeed it could have. And then we wouldn't have bought them and my disappointment would have been huge. Sounds like you know books!
:-)

Andrea, I didn't see your name until after I clicked and scrolled. Yes, I think you know a thing or two about books!