A Few Words From Whittier 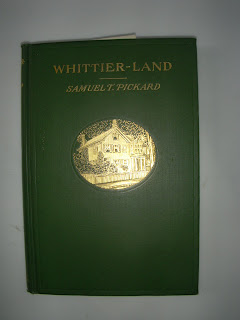 One of the best things about bookselling is the perpetual element of surprise. You go to the ordinary library sale and find a gem in a box that somehow got shoved under the far corner of a table. You buy an unprepossessing little book and it’s hiding a secret. It doesn’t matter if the secret’s worth a lot of money – it’s the intrigue, or even the sheer whimsy of it that provides delight. I feel sorry for wannabe booksellers who scan the soul out of every book that crosses their path yet never cultivate a friendship with any of them. The desire to accumulate huge inventories at the expense of learning reminds me of the frantic attempt to collect “friends” on facebook. 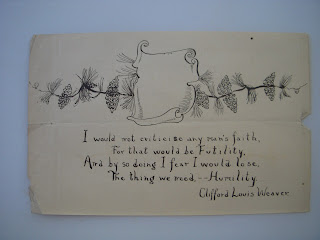 Not exactly earth-shaking, though I was still charmed. But the little green book had only just begun to whisper secrets. There were two more to tell, one of which is quite astonishing. The first was a letter written on August 7, 1905 to a man from Warren Ohio by Samuel Pickard, the author. Dear Sir, I am sorry I missed seeing you when you called at Whittier House. I enclose a bit of Whittier’s handwriting per a letter the whole of which cannot be used, as it relates to personal matters. Hoping you have enjoyed your visit to Whittier Land. Very truly yours, S.T. Pickard 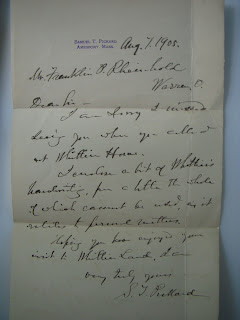 Well! How about THAT? Imagine a time when a personal letter by a famous poet is shielded from public scrutiny! And – horrors! –imagine it being CUT UP as a souvenir! I couldn’t fathom such a thing and besides, even if it were true a single word penned by John Greenleaf Whittier would have been squirreled away for safekeeping by the recipient, or someone who later got the book – that is, if the scrap even managed to survive the passage of a century which itself seems highly doubtful. Needless to day I wasn’t even a tiny bit surprised when I opened the envelope again and found it empty. But then some twenty pages later in the book a second envelope appeared. On the front of this one it reads “Part of a letter sent by Whittier in 1868 to his niece --- (indecipherable) then ---- (indecipherable) at Richmond, Va.” Beneath is stamped the name Samuel Pickard, Amesbury, Mass.) 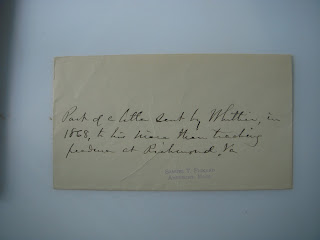 Well, what do you know -- a second chance to discover a tiny piece of literary history! But really, what are the odds? I don’t know, but whatever they are, I beat them! I really did. Gently I reached in and took out a small scrap of paper carefully scissored from a larger whole. For a second I just stared at it stupified until the word “thee” jumped out at me and I began to actually believe that maybe Whittier really DID write it. I knew he was a Quaker, so the use of “thee” made sense, but of course that’s a long way from proof. So I headed to Google and typed in John Greenleaf Whittier. The first thing that popped up was the Whittier House website, so I clicked on that and immediately his handwriting formed part of the homepage! It took only a short time to see that it appears to match my piece of letter. So what is this piece of letter about? I have no idea. One side says “we should want to know … how thee are situated and if thee care to know her.” The reverse is less easily read, but here’s what I can make out, “… in a school … per week with only a few scholars. …. thyself …” 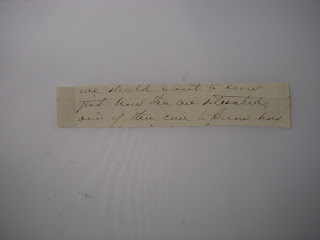 Who is this niece and is it possible to find out about her? Time will tell, but I am going to try. It looks like I’ve been handed another mystery much like the Chinese autograph book from a couple years ago. In both cases the secrets were visible. All that was needed was someone who cared enough to look. And, as always, to listen.
Posted by tess at 2:08 PM

Pickard's note says: "Part of a letter sent by Whittier, in 1868, to his niece then teaching freedmen at Richmond, Va.

The cut-out excerpt in Whittier's hand says, "...we should want to know just how thee are situated, and if thee care to know how"

The niece is Pickard's wife, Lizzie (probably after she died). She was the daughter of Whittier's younger brother, Mathew. She had taught the children of freed slaves after the Civil War for a couple of years, before they married.

You can find, on Ebay, copies of Pickard's book, "Whittier-Land," in which he has pasted bits of John Greenleaf Whittier's correspondence, as well, under his signature. Both, here, are no-doubt genuine.

Thank you for writing. It's always amazing when an old post is seen again. I recall having done some research and wrote a second post on Whittier and the green book -- will have to go back and see what that one says, though I do remember having info about the niece and her teaching post Civil War. I so appreciate your comments.