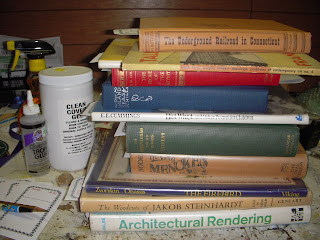 Sorry I’ve been gone so long. I tried to write a post yesterday, but the contractor was drywalling the bathroom and created an Oklahoma dust-storm of Grapes of Wrath proportions. In light of the coughing fits I had no choice but to head for the basement and stay there  -- which was great because I have something wonderful to do down there at the moment. No, not art, though that would be fun too. This post is about books.


As you know, for almost two years I have pined, yearned, and tried to finagle more space at the antiques mall, all to no avail. Space comes at a premium there so every time a booth opened  up it caught me unready in terms of both bookcases and inventory. Finally last year I bought some bookcases from a dealer who closed up shop next door to me, so at least that problem resolved itself. As you know, I scratched alibris from my list of venues last week to free up some cash (not to mention the piece of my soul they constantly gnawed on) and called the mall to see if I could swap my existing space for a larger one across the aisle. But it had been rented the day before to a very nice dealer who had outgrown the booth next to it and wanted to do exactly what I wanted to do. Since it was adjacent to hers I could hardly begrudge her – and I didn’t. In fact, I met her Friday when I was walking by just as her teenage daughter tied an apron on a mannequin backwards. We both looked at each other at the same moment and burst out laughing.


I  told the mall I wanted the next available larger size but only in my own row because the place is cavernous and many people don’t cover the entire thing in a single trip which means that a move could be the kiss of death -- or so it seems to me anyway. But for once I felt okay with the way it turned out and decided I’d spend the wait accumulating inventory. Meanwhile a young woman who has become an online friend is about to launch her own shop at an antiques mall in Florida on Friday.  She’s at the moving in stage now, so all week we’ve been talking about display ideas, buying non-book stuff to help pay the freight etc. A couple days ago she told me that her mall’s owner had gifted her with a free closet next to her booth that’s already fitted with shelving, plus  the free use of a shelf in a showcase for expensive titles. I told her she was very lucky because the odds of anything like that happening to me were about as likely as a sudden growth spurt.


So imagine my shock and awe when a  couple hours later the mall called me to announce that the booth next to mine would be available at the end of August. It’s the same size as mine, but here’s the thing – I can have both mine AND it for what I would have paid had I gotten the larger one which is smaller than the two combined! I have always loved this mall, but never so much as I did Saturday. Thank you, thank you  thank you, Jean! I will now have 20’ of length and the same 10’ of width. We went over Sunday to check it out which was funny because in my head it was the booth on the left  when it’s actually the one on the right! Either way though the space seems cavernous.


Of course with only three weeks left to go I'm ravenous for inventory, though I do have a lot of books left from the two big collections we bought, so I can pull from there. I also plan to systematically remove some of my better things from online, so I think I’ll be okay with books. It’s other items I need to find which is why we’re headed to an auction on Thursday which advertises ZERO books. That should be an interesting experience -- Tess in Antiqueland!  I also want to take the display boards for ephemera to the new booth to add visibility to our paper items. This has been a problem almost since the beginning, so I’m excited about the possibilities. I had been displaying all of my paper flat out on the table, but as the piles  grew too unwieldy I put it in large wooden fruit crates. For a short while that worked, but once the boxes filled up people didn’t flip through them anymore. The best way to sell paper is to hang it up like I did at the Akron Book and Paper Show. At the mall I should be able to use  both sides of the  boards too -- that is, if we can figure out some way to stabilize them.

Anyway, there you have it – the  reason for my silence. I'm very happy and excited. But I also know that there’s an inherent risk in a monthly payment that equals the cost of a good-sized car payment. There's an energy this time though which somehow seems to be pulling us forward in a strange and peaceful way. In the past every time I got to the gate  I immediately pulled out a hammer and nailed up a roadblock. This time there were no roadblocks, no hesitation, no equivocating.

Congratulations! I hope it works out well for you. I have added audio books, bookends and even vintage stuffed animals that pair with children's books. These are a few of my ideas. I am interested in what vintage or antique items sell in your booth. Enjoy this redecorating and spreading out time.

Thanks, Hilda! The mall I'm at would not allow audio books or anything after 1974, so I have to think OLD. I have sold booksends well and alo furniture which I rarely get because I rarely see anything I like. I've sold several chairs, especially the fabulous green leather ones, an immigrant trunk, a French table, and a three stack barrister bookcase. No smalls yet though other than bookends. I've also sold photo albums and games. I just got some slide rules from the 40's so I'll be taking them over. Dolls might be good to put in the children's section too, don;t you think?

Interesting that you mentioned dolls because i started to put a couple vintage dolls in my booth last week for a friend. Then she decided not to since I don't have a locked case and she thought if someone stole a shoe or anything, the value would go down drastically. Something to think about. And yes, I have sold vintage games there. I have about a half dozen in there now still in plastic wrap. I'm getting ready to put some old LP records in there in the next couple of weeks. And yes, I sold one small table but it was unique and I haven't found anything like it again. The mall I'm in is not as picky about dates. They just want a % of the merchandise before a certain date but they don't check. I monitor the dates myself. Good luck. If I find something that sells well, I'll let you know - please do the same. August is usually a killer (bad) month with school starting and its just coming off the big sale of Christmas in July. Good Luck on the move!

God luck to you both with your adventurous spirit. I know you will do marvelous finding things, especially OLD books to fill this space. The enthusiasm is contagious!

Hilda first! I thought for sure I had responded to this but I see that I didn't. I wrote itand then forgot to press the button! Your friend is probably right about the doll parts. I've heard the furniture and radio people talk about how the hardware gets taken. Absolutely, I'll share what I know. stay tuned!

Okay -- nice to see you here Ginger! Thanks for the vote of confidence. We need a LOT of stuff! Good thing I have a couple sets. :-)