The Name of the Sale 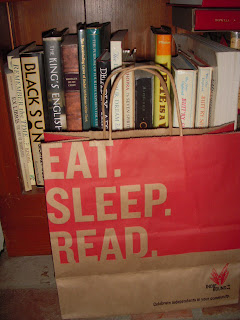 (Picture will follow, but there seems to be a technical issue. Can't load it. I finally decided to just post.)


By now you probably know all about The Last Book Sale held in Archer City, Texas last weekend by Pulitzer prize-winning author and long-time bookseller, Larry McMurtry. At age 76 McMurtry decided he was ready to close three of his four bookstores all located in this small town 150 miles west of Dallas. It was, he figured, time to allow 300,000 of his 425,000 volumes  to re-enter what he calls “the river of books.” I find that phrase especially apt, as I often flash on that very image myself --  a current of books moving rapidly, volumes tumbling  over volumes in their colorful, endless progression to  -- somewhere. When you think about  it it’s  really a rather  strange visual though coming from a seller like me who can’t even  find a dozen  good books a month these days!

By all accounts less than two hundred deep-pocketed bidders converged on Booked Up which was the name of McMurtry’s collective  stores, only one of which (by design) now remains in his hands. He opened the first of them in 1988 (I actually remember this – I think I read it in Writer’s Digest magazine), but it was not the first store he’d  ever had, as he’d previously owned shops in D.C. and Tucson. Is it just me, or does anyone else thinks that 150ish bidders is a very  small number to show up for a sale that monumental? I’ve seen more people than that in line at the Planned Parenthood sale in Dayton. Perhaps it’s because of the remote location and the cost of hauling hundreds of pounds of books home, but that didn’t deter some dealers, and even some wannabe dealers. From such far-flung  states as Arkansas, Pennsylvania and New Jersey they came, filling up cars, trucks and trailers with inventory for which they paid very little in most cases. The lion’s share  of the books were divided into 1500 lots of 200 books each, and sold for under $200 a lot for the most part. The pricey items were the  McMurtry 101, all handpicked titles  sold individually, and deemed by their owner to be  the most interesting, though not necessarily the most valuable. The biggest bucks seemed to have been spent on a book of collected  erotica  by Anais Nin and Henry Miller, among other authors. That one fetched $2,750 from an east coast dealer who plans to resell it.


All week I’ve pondered The Last Book Sale, its (to me)  low turn-out, and what it tells us about the industry, if anything. Every day I scoured the internet for new details, but most of the stories are rehashes. A few skirt around the edges of what I really want to know, but none lay it all out, most likely because no one CAN lay it all out, including McMurtry himself. On the one hand he says that the internet has taken a toll on the book business, but on the other he says he thinks the industry will survive because people have a love affair with the physical book. I want to believe that – I do – but DO most booksellers share that belief? Do I? Really, do I? If they do, and if I do,  why then did so many of us pass up the chance of a lifetime to get a lot of fresh new stock? Actually it never occurred to me to go, but why IS that? I’ve certainly had hare-brainier ideas than that in my day, so why didn’t the thought even flicker across my mind? Could it be that deep-down I’m not as true a believer as I like to think I am?

All summer long the bookseller forums buzzed with stories of huge inventories and low sales and just this morning a friend mentioned that she’s had zero sales all week – all WEEK – from either amazon or ebay. My own online sales are down too this month,, especially from ABE, my front runner, and I certainly  haven’t gotten many new  books in here either – which brings up the next big question. If nobody wants books any more where  are  all those unwanted books hiding ? The river should be logjammed with them.


The other thing that bothers me about the Last Book Sale is something that only one writer mentioned -- the sadness – which he said coated everything like Texas dust. I believe it.  McMurtry himself says it was time to let it go – he’d  had a heart attack in January and says he’s becoming forgetful and doesn’t want to burden his heirs with more than can be easily handled. Okay, I get that. But he also says he isn’t sad because he still has 120,000 volumes and can always buy more if he wants them. True. Absolutely true. But I don’t know – it seems to me that it’s not just about the books themselves. It’s about living  in the thrum of possibility  -- the next treasure found, the next great sale made -- that was/is the bookseller’s life. But IS there such a thrum these days and, if so, will it still be thrumming tomorrow?

I don’t know. I truly don’t. It’s the sixty-four thousand dollar question of our profession.  As I read the many McMurtry sale stories online the  first book auction I ever attended played in my head like a movie.  It was a good 14 years ago and I know I’ve  mentioned it before, but  it seems to want me to tell it again. There used to be a small antiques mall in Akron which became home to at least three booksellers I can think of. One of them – Harry – decided he was old and it was time to close up, so he had an auction at which we bought  a LOT of his inventory straight off the shelves at the mall. As we were packing up  I remember going out into the hallway for more boxes and spotted Harry  all by himself at the end of it. The sun was setting  and  there in front of a large window he stood, his back to me, a small almost-silhouette, head bowed, hands in his pockets. I remember wanting to run down the hall and tell him, no, no, it’s all been a mistake! Take them back! Take them back! I didn’t of course and eventually Harry bought more books and dove into the business again. But then eventually there came another day when we bought parts of his inventory again. By then I think he was too sick to mind much though.


When I began writing this post I thought I’d write my way to the  meaning of all this. One of the best things about writing is that it teaches you what you already know. But here I am with no conclusion to offer. All I learned is what triggered the whole thing. I thought it was the sale itself, but I can see now that it wasn't.. It was the NAME of the sale. It was meant of course to be a play on McMurtry’s The Last Picture Show. But for me, and maybe subconsciously for other booksellers,  it  meant something else.

Would you really want to go to a distant sale when the longtime owner who is also a dealer has pulled the books he wants to keep? Certainly the value of basically common books (under $50) has fallen. We have people pulling up every week and giving us books.
Andrea

I agree, but from what I read it said that every lot was designed to have something of value in it. It's not really about that though. I just think it's a sign of the times that I didn't even entertain the notion. I probably never really WOULD have gone, but I would have imagined it and wished I could. It's not the actual going -- it's the sense of possibility. There was a day when I had that in abundance, but not today and that's sad.

I *was* curious about McMurtry's sale, but not curious enough to look into details. Don't know why exactly...perhaps there IS an unconscious motivation to avoid the death knell. Probably more to do with the remote location, and that depressing location movie Last Picture Show 9LOVE the film....don't wanna go there...) At the same time I am VERY interested in the upcoming Brooke Astor auction at Sotheby's. Can you imagine the signed editions??? But the real reason for my reply is to share this hopeful tidbit from today's New York Times about the apparent proliferation of specialty art book stores in NYC. I hope this link works: http://www.nytimes.com/2012/08/17/arts/design/bookstores-as-galleries-of-the-page.html?_r=1&ref=todayspaper

If not, check today's Weekend Arts Section in the NYT. I can't wait to explore some of these!

Oh, isn't' that the truth about that part of Texas, especially in the sweltering heat? Same here -- loved the movie, don''t wanna go there. Yeah, death knell is a good description of that feeling that comes over me every once in a while. But I was ableto find the article you sent and am so excited about it. It's exactly what I was talking with the 20-somethings at the Highland library about a couple weeks ago. There's a post about it, maybe two, at the end of July. I am off now to see the wares at Sotheby's. I somehoew missed news on the auction. Thanks for leaving a GREAT comment.

Tess, I guess I thought you might hop a plane and head to the sale. Your love of the hunt and the books keep you going. Age, the writing on the wall, memory, all are playing a part in what you saw this week. Death knell, maybe not yet, but the times they are a changin' AGAIN. And will continue to change. I was in Best Buy today and everything I needed and wanted was unknown to them. I guess that told me something. And I could net remember if I ws in Big Ben, Ben Franklin, or Ben somebody...at least I remembered it here. Keep up the good fight and I am still loving my books from you. The kindle sits collecting dust today as I read the 60 year old 1st edition!

Thank you for a very thoughtful post. I agree -- the death knell hasn't sounded yet, but it is troubling, as even the antiques people aren't left unscathed. There's much talk about the baby boomers being the last to collect any old things. I rather doubt that, but I do think what's colected will change dramatically. It already has with books. As long as there are readers like you I will hang in here!