A Little Store To Call Our Own 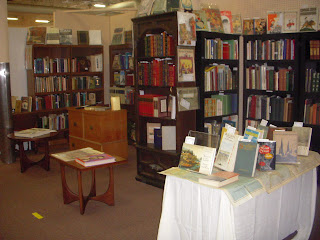 We did it! We moved into the new booth at the antiques mall on Thursday. As I believe I mentioned, the window of opportunity to launch it this weekend had barely cracked open, as Eric had to go back to Malvern for the second phase of the Great Trail Festival. We had called and asked if we could get in earlier if it was vacant and they kindly said we could and they would even let us know the minute it happened. Day followed day though and no call, so Wednesday night I resigned myself to the possibility of a mid-month move.

The glass wall and shower door were due to be installed by the glass people on Thursday morning anyway, so I let the mall go and turned my attention to the house. Well, actually I turned it to the books we just got. If you recall I was worried about not having enough to fill the new space. Well, early in the week a long-time seller (he’s been around longer than our fifteen years) came into the store with forty boxes of books to sell. For a variety of reasons, not the least of which is his utter disgust with what the business has degenerated into, he decided to close up shop. Eric loaded up the car with them and surpised me Wednesday night. World’s Best Contractor (WBC) was still there sawing crown molding in the driveway, but I whirled and twirled around him like a pinwheel. He already knows I’m like that anyway. I jump up and down like a pogo stick very time he creates something wonderful.

Thursday morning I was having a blast sorting through all those new books when the glass guy called me and WBC in to see the finished product. One look and my vocal chords froze like an exposed pipe in the dead of winter. WBC turned so white I thought he’d keel over. They’d custom made both the door and the wall with the wrong glass! It was supposed to be clear so you could see the tile in the shower – an important design feature for this small space. But instead it was opaque with sort of a rainfall look. When my vocal chords finally unlocked I mumbled something about it not being what I expected, but I supposed I could live with it -- which was not even a little bit true. WBC’s eyebrows shot to the top of his head at that, so I just shut up and stared miserably at it.

It was Jean from the antiques mall. The booth was ready and we could come right this second if we wanted. I wanted! Oh, did I want! I called Eric and in fifteen minutes he and the truck were here and an hour later we were rambling down Rte. 18 loaded with books and furniture. Before we left home WBC assured us that he was taking the glass situation to the mat.

As soon as we were in the mall excitement splintered into a cross between stress and elation. The clock was ticking and we had only five and half hours to complete the task. It sounds like a lot, but it’s not because people come by and talk to you. Also ideas that worked so well in your head don’t always work that well in reality. You move something from here and end up dragging it over there. You pull all the books out of a case and distribute them in narrower categories. I felt like we were competing in a reality TV show. Just as they sounded the end-of-day warning about selecting your items etc. etc. we called it a done deal. But even so I looked over my shoulder at it until it fell out of sight. It reminded me of the first day of kindergarten when I left my babies in the hands of strangers.

WBC was still there when we got home so that abruptly shifted me into house mode. He was fairly shimmering with excitement to show us his latest handiwork. He’d grouted the tile on the foyer floor. Blue, grey, green and brown tones glowed in the late afternoon sun, so beautiful you could weep. And yet try taking a picture – it can’t be done. WBC also told us that a new door and wall were being made of clear glass and we are welcome to use the rainy one while we’re waiting. We also owe not a penny more. I was so tired (more from the stress than the work), but I still whirled and twirled a few turns over so much good news. Later I remembered that I’d never taken pictures at the mall and, in fact, had forgotten to take the camera.

So today Nancy and I went over and I got to unveil my little store – it DOES look like a little store (Andrea even said so and she HAS a store). We took a ton of pictures of which the one on top is the best for getting a handle on the long view. Of course there’s much more I want to do, but for now I am a very happy and hopeful bookseller. 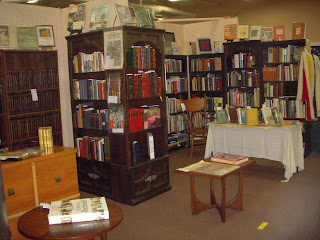 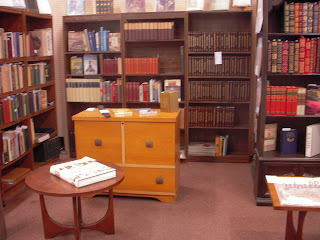 Ah, the best laid plans of mice and women.....
Engineers and scientists operate under the abiding principle that the most brilliant ideas, and the most compelling theories, are not worth much until they have been TESTED, by experiment, by being put to use in the real world. So you have cemented some valuable wisdom here. You have always been a fast learner.
And your shop is very welcoming - I would like to poke around in there. It could be a little messier, but that may happen.....

I would be grateful for a little mess if you provided it!

This comment is addressed to the arrogant pain in the ass robot that guards the comment section against other robots.

68 is not a word, it is a number. Sixty Eight is 2 words. If you want me to type a number, say so, don't call it a word. And I would advise you not to violate Asimov's Laws of Robotics. -SEP

Well, you provided the only laugh I had all day. Eric was in Malvern and I worked all day and talked to no one, which was okay with me, but a laugh was in order. and you just delivered it. For this I am grateful!