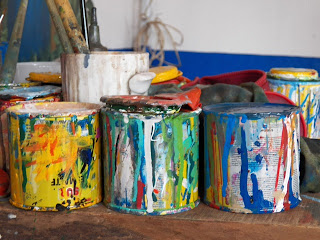 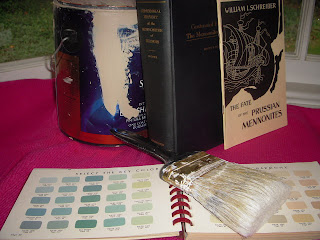 If I could create the world’s best book sale I would paint it all in bright colors with broad strokes using a giant paint brush and messy gallons of paint with drips cascading down the sides of the cans. It would be big too, this sale – lots of space and lots of books all piled up everywhere in crooked stacks on miles of tables and underneath in boxes so heavy you’d need two hands and the strength of King-Kong to pull them out. No one would be obnoxious, or step on your feet with ten pound sneakers and all of the buyers would be freshly showered. I'm not sure how this part would work, but somehow the sale would crackle with energy and still emanate a zenlike peace to soothe our nerdy bookseller souls. Oh – and the books would be priced low too – mostly a dollar, but no more than $10 for the best – and there would be more than enough books to go around so that everyone gets what they want. At my fantasy sale no one is left out, not even the scanners. Wow! Could it be that I’m turning into a nicer, gentler bookseller? Maybe. But it might also be that I’m feeling benevolent after having GONE to my fantasy sale yesterday.

The real thing looked a lot like the above, except for maybe the rain and the darkness of the building in which it was held. But think about it – when does real life ever give you every single picky little thing you imagine? Not often. And sometimes it even gives you something BETTER than you imagined. So let’s look at all the good stuff here. The crowd was great, and happily, readers outnumbered sellers two to one. Scanner people were evident too, but their magic wands likely didn’t get a heavy-duty workout because old books trumped new ones by a margin wider than a football field.(Okay, so much for the everybody gets what they want thing.) But the room WAS cavernous and there WERE lots of books and also a happy peppering of old-school book dealers to talk to. But, best of all, a sale that used to be noted for its pie-in the-sky price tags, magically morphed into the dollar store minus all the cheap Chinese doo-dads. Seriously, books were priced anywhere from a dollar (pamphlets and art catalogs fifty cents) to no more than $10. And even the $10 ones were rare – I spotted only one!

So what gives with this? I don’t know, but I suspect that there was a huge donation from one person involved, as many books centered around medieval and renaissance topics across all genres, including magazines.Either it was an estate or else the inventory of a former bookseller. I am leaning hard toward the latter because I bought some magazines on medieval history and the name of a certain bookseller I was crazy about, but who sadly died a couple years ago, is on the mailing labels. I suppose in the big picture it doesn’t matter either way whether or not they were his, except that it DOES matter -- to me anyway. This dealer was the first one of the “real booksellers” to treat me like I had a brain in my head and might actually turn out to be a “real bookseller” myself some day. Since that finally happened I would consider it an honor to sell his books which is why I’m so fervently hoping that these are them.

Will I ever know? Maybe. Or maybe not. Tomorrow is half price day and the tables will likely be picked over like a turkey carcass the day after Thanksgiving, but I'm going back anyway. To buy books, yes, but also to find out if my theory is right. He lived in the town where the sale was held and ran a store not far from thre, so I think the odds are about fifty-fifty.

Okay, I know what you’re thinking, so let’s lose the sentimentality and cut to the chase. Were the books valuable? Yes. No. That is to say, it was a mixed bag on two different planes. I got a few high two-figures ones on Mennonite history, several exceptional pamphlets and art catalogs, a two year consecutive run of an uncommon magazine, and a fair number of books priced at $25-45 each, all online stock. I also got a plethora of books for the antiques mall which,oddly, are the ones I love best. Something tells me my bookseller friend may have owned most of those and quite likely some of the others too. I’d heard that his son is selling his former stock online, but I also know that some of it has been around for awhile and likely suffered the slings and arrows of wannabe sellers which means that they very well might have been donated to the sale. But there’s no point in speculation. I’ll either find out, or I won’t.

The important thing is that the new season got off to a rip-roaring start (if you don’t count the FOL sale the previous night) which we won’t. For me the official launch was yesterday and all it lacked was a bottle of champagne, a couple crystal glasses and a few rays of sunshine.

Oh yeah -- and enough high-ranking books on amazon so the scanners get to be happy too.
P.S. Isn't the new photo at the top FABULOUS? I wish I could say I took it, but I did not. It was sent by a reader to whom I am grateful, as it's exactly what I was thinking when I wrote the above.

Mennonite history books wonderful and rare. Not something you come across everyday. Very creative post Tess. One of your best. Must be all that zenlike book karma from a great, real, sale. gin

Thanks, Ginger. It was great fun. Went back the second day and bought a lot more, but did not find out if the books belonged to my bookseller friend.

Thanks, Hilda. I had fun writing it. I have been remiss this week, but after I get home from the estate sale today I am going to try to write another post.