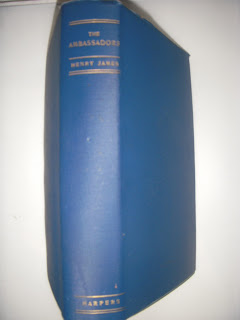 It’s a rare time when I am without words, but this summer may be one of them. It feels to me like time is stuck, like the hands of the clock got cemented to its face. Every day it’s the same thing – house, house, and more house. The work drags on and while it IS progressing there’s still a lot of stuff on the list. I suspect I will be living with World’s Best Contractor for at least another month because every job takes three times as long as you would expect and of course I’m not his only client. I think all those TV shows where they make over a house the size of the Biltmore in a week raised my expectations and atrophied my brain. As a result, I’ve refrained from blogging on the grounds that I am simply too boring at the moment.

The antiques mall seems to be humming along though. We’ve already made the new higher rent plus a profit, but it’s important to note that half of it came from things that are not books. Wednesday we sold a four-point Hudson Bay blanket Eric bought at an estate sale AND that gorgeous blond cabinet that’s really a cedar chest. Oh, the angst when I saw that the latter had sold! I have a hunch that I priced it too low and it was snapped up by a dealer. But I doubled my money and sold it in less than a week, so I really can’t complain. What’s bothers me most is that it gave the booth a dash of panache and made a great display piece for books and now there’s nothing there but a gaping hole. Great antiques, like great books, do not sprout out of the ground. Most of what’s out there is either primitive, common, and/or dreary. I look at that stuff and it makes my teeth hurt. I spent an hour scouring Auction Zip yesterday in hopes of finding a decent auction to go to, but in every single instance all it took was a glance at the pictures to nix that idea.

Believe it not, I need books again too. The forty boxes Eric brought me before he left have all been swiftly dealt with and provided me with only a small boost in inventory. Sixty per cent returned to the store, thirty per cent went to the mall, and ten per cent landed online. I remember the day when the whole shebang would have gone online and created a nice bang in return. But that was then and this is now. I tell myself that a lot these days.

Anyway, I don’t have an abundance of books left after dragging so many to the mall, so I am mulling over the idea of slamming something really good on ABE and Biblio. Speaking of Biblio, I had a whopping twelve – TWELVE – orders from them last month. It’s unprecendented. It’s practically unheard of. It makes me sound like a pathological liar. But it really did happen. Since then, however, there have been a measly two. (Sigh). So, here I am considering what I have squirrelled away and what I might part with without having a meltdown. For sure it will NOT be the Frank Lloyd Wright goodies under the guest room bed. That stuff is the gold standard to be trotted out at next year’s Akron show just in case it’s the only decent stuff I’ll have. So that leaves me with a three-figure book on kilims, the second copy of the Savoy Cocktail Book, or a first edition of The Ambassadors by Henry James WITH the linen dustjacket. I was leaning toward the James.

But then I read that Henry liked it best of all his books and that made me feel like maybe I should wait and take it to the show too. I don’t know. At any rate, I thought I’d at least take it out of the closet, as you might want to look at it in case you ever spot one. I have to tell you though it’s not exactly a book that jumps off the shelf. I didn’t know I had it until I unpacked that collection we bought this spring in Cleveland. And even when I first picked it up I still thought it didn’t have a jacket! As you can see in the photo below, the dustjacket is made of linen and fits the book like a second skin. Very cool, especially if, like me, you like the look of naked books. 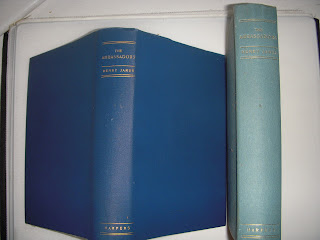 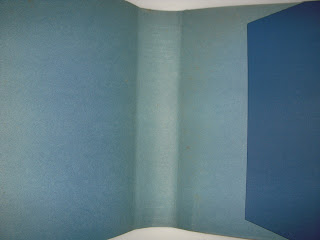 And THAT’S how I got the provocative title for this blog which is probably boring and for which I apologize. Eventually the sawdust will clear and so will my thoughts. I promise.

Ahh, a four point Hudson's Bay blanket. Now there's a treasure, old or new. At 30 below in the north woods, it is priceless. I had one once, but not a four point, a two and a half.

I actually have no idea what a four point IS. Eric just said it was one so that was good enough for me. He also said that you can tell the age by the size of the label. This was an early one because it had a small label.They are impressively heavy! We took it over in August, but I think it was too hot for that. But now with fall coming it sold. The only way I want to sell nonbook stuff is if I love said stuff. But he gets to play too -- I'm good that way. :-)

I believe the number of points was the price, in beaver pelts, which was shown by the small stripes on the blanket. When people say Hudson's Bay blanket, they are talking about the 4 point.

I remember seeing those little stripes -- yes. That sounds about right.

I liked this book. And remember that this coming weeks is the Edith Wharton Birthday anniversary celebration at The Mount, her home where she entertained Henry many times.

Cool! I didn't know that. You are always a font of literary info. Thanks!