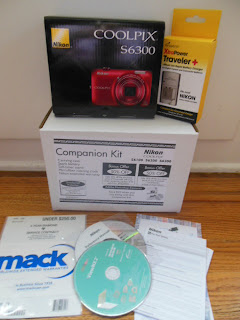 The best laid plans – get interrupted. I know this to be true because every single day this week I tried to write a post and every day something happened to prevent it. The big something, which should have been a little something, was the demise of my camera. These days you don’t get cameras fixed –you get them replaced. I guess I could live with that if only the replacements WORKED. But in a span of 24 hours I bought two digital cameras – a Fuji and a Nikon – and had to haul both of them back to their respective stores (note that was plural) due to defects. I liked the Nikon Coolpix though because I had one before and liked IT, so I ended up giving that model a second go. Maybe the fact that it was purple had a teeny-tiny something to do with it, but mostly it was because it seemed familiar and therefore friendly. In fact, I would have bet my last memory card that I’d be snapping pictures like Ansel Adams in an hour tops. It didn’t happen.


The problems were myriad, so I will boil them down to a.) the lack of technological talent of  the user and b.) the overabundance of tech-talk by the writers of the annoying manual that accompanied it. I finally got it up and running, found the flash setting and the setting that sizes the pictures – all that important stuff – and zoomed confidently in on books I’d listed the previous day. But did they fly into cyberspace on the wings of angels? No, they did not.


It turned out that my new anti-virus program – the computer geniuses in Brunswick jettisoned Norton due to problems it’s having in its new incarnation – in favor of a product made by a company here in Medina. So far it seems good enough, but it did get a tad overzealous and decided that my new camera was up to nefarious things, hence why no pictures could be uploaded. I called the geniuses and  they fixed it, but  by then the day was over. Which brings me to yesterday.


Yesterday was filled with meetings. I thought I’d pretty much left those behind when I quit my sales and marketing job at the nursing home twenty-some years ago. But it’s time again to start working on the 2013 Akron Antiquarian Book Fair, so I had two meetings in one day. The first one was fun because it was just me and Andrea, but the second one was serious business. Actually I don’t even mind these kind of meetings. It’s just that I desperately needed to make up for lost camera time. As always, I love the book fair, so working on it is normally a great pleasure. Last year we introduced speakers to the itinerary which proved to be a big hit, so this year we’ve lined up four more, plus the possibility of a VERY cool display. I can’t say what this is yet because it’s really a long shot, but if it works out it will be fabulous. If it doesn’t there’s always  back-up plans.


Thinking about the fair though makes me anxious because I have bought very little since the collection I told you about in my last post. I’ve only been to one sale –  that small rural one I’ve mentioned several times that I like because it’s quiet and they don’t allow scanning which also means that I don’t have to fight the crowds. Mostly I don’t get much, but this time I found one humdinger of a book –New York's China Town; An Historical Presentation of  Its People and Places, published by Bohemia Press in 1892. This one’s got it all – photos, drawings, and a lively text which covers, among other things, governance, the Chinese restaurants and laundries, the seclusion of women, family life, music, opium smoking (includes a detailed drawing of the apparatus), playing fan-tan, Chinese lotteries, prostitution, slave girls, Chinese funerals, and Chinese cemeteries. 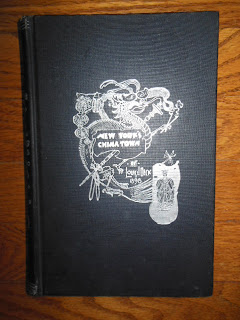 It just goes to show you -- you can find anything anywhere. Especially when you aren't beleaguered by broken cameras.

tess said...
This comment has been removed by the author.
3:33 PM

Okay, more of the text has turned blue. I tried to fix it, but I can't. So just mouse over the blue and it will turn white while you are reading it and then will go back to blue. It's rather ironic, isn't it? I spent the whole post complaining about technological problems and blogspot does THIS.

Aha! Now I know who to go to when things get crazy! :-) Mine is actually purple -- all the boxes show red. This camera is really okay. The first problem waasa faulty connection, but then I got it replaced and it was okay except that the antivirus didn't like it. Once that got fixed it was good to go.

So only your comments are showing now...lol. Not loving Blogger these days. I like purple but it was not offered when I got mine. Happy you are up and running. So important for your business.

Thanks! I'm seeing the whole blog except that the blue part remains blue. Nancy knows how to fix it I think, but I forgot to remind her to gibe me the magic key.

NOW it disappeared. That's my second post to go missing.