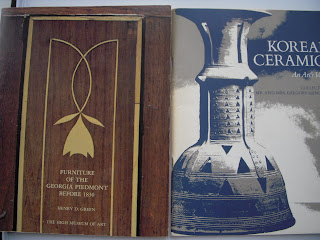 Life has been in hyper-drive for me these days as much as I try to slam on the brakes. One of the things I did last week though was actually book-related – we went to the annual book sale in Dayton. This one comes with considerable expense since we need to book a hotel, but it normally pays off big-time in both fun and profit. It paid off this time too in high hilarity, but in profit? Eh, not so much. Here’s the ugly truth--were it not for the facts that we have an antiques mall booth and a store and I am insanely in love with paper, we would have chalked this sale up as an expensive disaster. Not only were the books in the “specials room” not special, but neither were the silent auction books. I bid desultorily on three and got none of them in spite of the fact that they were the poorest offerings EVER. Two years ago I bid on two and got two and they were OUTSTANDING. Last year I bid on three that were good and got one of them. So what is it saying about the fact that I bid three times on iffy books I almost hoped I wouldn’t win and got none of them? I don’t know for sure, but I wonder if maybe, like me, everyone else was trying to salvage the sale too.

One area I did do well in was children’s books, but they were practically all for a donation to the community center Christmas program. I bought a huge boxful for $50, all like new. Other than that it was a stray book here and a stray book there, none selling at more than $45. I took my time, didn’t panic, looked at everything twice in every genre ( it’s a huge sale too), but ended up buying less books overall than usual. On my second pass through the sale I crawled around on the floor and pulled out a box that was way in the back under the kids’ books, but didn’t seem to be for children. From there came the two art catalogs shown above, one on Korean ceramics and the other on furniture from the Georgia Piedmont pre-1830. Neither went to three figures, but they both bested every book I got. The second I picked up each of them my internal radar screeched like a magpie, loud enough to incite a change in my game plan. Right then and there I decided to give up on the books and follow the paper trail instead.

This actually turned out to be great fun, sort of like a secret game that I was the only one playing. Paper turned up everywhere, but not right out in the open. There’d be a whole box here and there, always requiring much crawling and pulling, but also lots of goodies in between the books, and even IN the books. I bought one book just to get the item inside it! Among my finds were a stand-out fashion catalog from 1961 with awesome color pictures on heavy paper and big in size, plus programs, booklets, and more unusual art catalogs.  In the end, I left the sale reasonably content, if not exactly tap dancing across the parking lot. I even know HOW to tap dance if the occasion called for it, but believe me this wasn’t worthy of a single time step.

Sooooooo – what happens when your favorite book sale disappoints that badly? Do you call it an anomaly and go back next year, or do you regretfully cross it off the list? Right now I can’t say for sure, but what I can say is this. I’m mighty glad that I am not relying on traditional book sales to grow my inventory these days..
Posted by tess at 12:01 PM