Of Time and the Bookseller 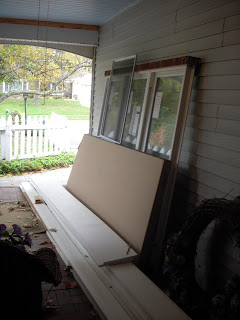 I know I already told you this, but I’ve been building stress like a high-rise tower, one brick at a time, ever since July. But now as book sale season kicks into high gear and work on the porch (finally!) commences there may be a pause – not a dramatic one, but maybe a small quiet space to regroup as we head deeper into fall. I missed so much this summer. We hardly went anywhere or did anything. I sat out on my porch exactly twice before the screens came tumbling down and had dinner on the patio a paltry once and that’s only because Darwin came for the Fourth of July. But the thing I miss more than porch sitting, summer fun, and dining outdoors is reading. I sorely miss reading.When I was a kid I’d check out the allowed four books a week from the library every Saturday and tear through them by Thursday. Later, I’d rip through a couple adult books a week and at times even more than that. But ever since work began on the house I have read only six books in three months and two were over the last two weeks! No wonder I’ve been edgy and snappy – a life without reading is NOT a life well spent.I can’t blame it all on the house, though that was definitely the biggest contributor. Moving into the second booth at the antiques mall and trying to keep it continuously stocked added significant anxiety too. I know it sounds easy -- just buy some stuff and haul it over there -- but I’m here to tell you that it’s most emphatically NOT that simple. In order to float this expensive boat I need more than books and there opens up an entire new thing to focus on. When I launched in September with the second space I had the combined area tricked out to the nines, but by the end of the month I’d sold every single non-book item I had! Seriously – every single one. That includes two Danish modern tables, a Danish modern chest, two Hudson’s Bay blankets, a 20” antique slide rule, the Lincoln bookends, and a celluloid photograph album that contained a music box. Of course September totally rocked financially, but now it’s October and October is NOT rocking. It’s okay, but let’s put it this way -- I‘d better start channeling my inner antiques dealer ASAP. I tried all weekend to do just that, but came up empty. The one thing I liked – a vintage Japanese screen that could be hung on the wall -- is impossible to display for the simple reason that I have NO wall space!As I peruse what I just wrote I’m amazed at the first paragraph and the notion that there might be some relief from the racetrack I call my life these days. Yes, the house may very likely get done soon, but we are off today to see a collection of books in North Royalton and later in the week will attend two crucially important book sales, plus any estate sales that pop up -- and this on top of two major book sales attended last week, plus the one estate sale yesterday. There are still a couple more the following week and in November we’ll be heading off to my favorite sale in Dayton which requires an overnight stay.Then of course there’s been the stress of the mess! Remember when Eric did the Magical Makeover of my office and I swore on a set of Kipling that I would never, ever, ever, EVER let my office be anything but a page out of a decorating magazine? Yeah. Well, take a look now. 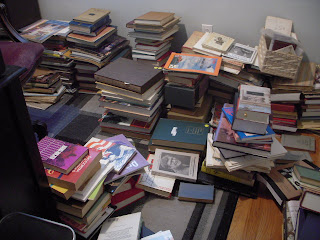 If Martha Stewart laid her critical blue gaze on THAT (which is only one section of a greater problem) she’d have a spell of the vapors! Of course the mess adds greatly to my overall dis-ease, but even my time for listing has been compromised. So the books run rampant and will probably run even “rampanter” yet. What you see here doesn’t even include the leaning stacks all over the “ell” of my wrapping bench, the shelves beneath it, AND several of the shelves temporarily left empty after the Great Purge of old stock.I really didn’t mean this post to be a downer and/or a rant, but now I feel like it is. It’s not that I’m looking for sympathy because, believe it or not, I have enjoyed much of this stuff even as I have melted into a puddle of despair over other parts. The real reason I’m sharing all this is because I miss you guys in the same way I miss reading. Several times I tried to write, but each time I quit because I felt whiny and boring. Which of course I AM! But maybe it’s okay if you see that right now so you know that:I am not giving up on the blog.I am not all written out.I still love doing this.And I appreciate you all very much.

Mess is normal state when one is productive. I am trying like mad to create stuff for a craft booth which is a first time thing for me. I am going to post a pic of my workspace soon. Take a look.
I cannot maintain order when my mind keeps dreaming up more ideas and time is short. Well, that's MY excuse and I'm sticking to it.

Okay then, that's my excuse too -- at least for the office! I haven't touched my art supplies except for about an hour to make a card. But things WILL slow down at some point. They always do, don't they?

We love your writing and will not abandon you while life invades your peace. Winter will provide you with much relief. I saw a quick Nate Berkus segment on ABC yesterday...he would have those books set up in quiet a wonderful display in a very short time. lol....I was actually more interested in the one with the woman on the cover. Is that Amelia Erhart?

Thanks, Ginger. Hope that's true. My numbers are falling right along with my output. I am so squeezed for time it's insane, but I am going to write today.