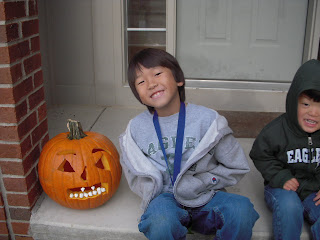 As you know, I’ve been cranked up like a tin Lizzie for the past two months. I probably still am, but this morning I feel lighter than a dirigible. We settled up with the contractor on Friday and he put the finishing touches on the house on Saturday, so I am officially here, blissfully, mercifully, ALONE. It feels so great I can hardly sit still to work which I desperately need to do, as we spent the weekend in Michigan with our grandchildren. That, too, was good for my soul though – we went to our oldest grandson’s soccer game (where he scored two goals and made several assists), enjoyed a hilarious lunch at a Japanese hibachi restaurant, carved pumpkins and gave them dental implants with marshmallows, baked Halloween cupcakes and watched The Avengers which the two little guys acted out for us just in case Gran and Papa were too dim to understand the action on the screen. I laughed a lot and temporarily forgot everything that seems to loom so large.

A couple weeks ago at one of the book sales ( the FOL where I hardly bought a thing for the business) I did manage to get both kids a ton of books. We sat on the floor and I doled them out one at a time. If you saw the three year-old’s unbridled glee at the sight of eight Sesame Street board books you would never again doubt the future of books in the Age of Apple. He squealed, he screamed the names of the characters, and literally whirled and twirled just as I do when my joy runneth over. Though he’s not one to sit down and listen to a story as his older brother did – and oh, how I miss that – he loves to show me what’s happening in the pictures. He also hugs the books to his chest like stuffed animals and tells me “I’m reading now!”

I, too, am reading now and, oh, how good that feels after a draught that lasted all summer and most of the fall. Of course I did read a handful of books during that period, but didn’t really like any of them which makes me wonder now if the books were really that poor, or if my “terrible, awful, no-good , very bad” attitude had something to do with it. Right now I am reading a book written in the 40’s, a YA coming of age story, called I Capture the Castle. There’s a movie of it out there somewhere, but unlike Cassandra, the main character in the book, Netflix appears to have problems with capturing. But that’s okay – the book is so detailed, quirky, and fun that it, too, has “restoreth my soul”. What’s not to love about a book which begins with the line, “I write this sitting in the kitchen sink”!

(Somehow the rest of this post disappeared. A resder told me that it had reformatted itself so there was no paragraphing. I fixed that and then discovered this morning that the rest is gone. I apoligize, but I can't fix it because I wrote it on here and don't have a copy.)

The pumpkin and the little one are making the same SMILE! LOL love it Tess!

I didn't notice that! How funny.

Your joy came through your words. It helped to refresh my soul as I sit here in front of my desktop computer - the laptop is acting up again.

Oh, what a nice thing to say. Thank you so much, Hilda. Makes me think that maybe once in a while there might be a reason to all this talk from me!!!!!