Christmas With Cream On Top 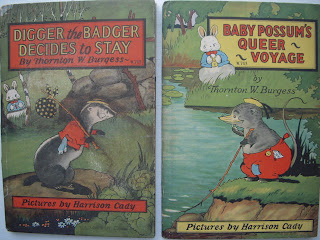 I had planned to post early this morning, but things are REALLY cooking over here and we’re not talking dinner either. These last few days orders have been popping like popcorn and good ones too. It’s so interesting to me how books can sit around forever and then suddenly become hot commodities. Three or four years ago we went to an auction where I bought many 1920’s era children’s books . Right away all of Harrison Cady’s wee Butternut Hill books scurried out the door, as did many of the original Thornton Burgess titles from the Cubby Bear series. After that they sauntered out at their leisure one at a time – a Queen Holden here, a Flora McFlimsey there – and then pretty much stopped dead in their tracks. Until today. In the span of five hours three volumes were sold on Advanced Book Exchange to three buyers -- two of the Thornton Burgess books: Digger the Badger Decides to Stay (Whitman, 1927); and Baby Possum’s Queer Voyage (Whitman 1927); plus Happy Manikin in Manners Town by Laura Rountree Smith (Whitman, 1923).

The other totally amazing thing is the sale of the set of books, again on ABE, that I won at the silent auction in Dayton last month – The Architectural Treasures of Early America. This is a gorgeous Christmas-green 16 volume oversized set which I’ve had twice before and is apparently very desirable in certain quarters. But here’s the thing – the desire swells ONLY at Christmas. You can buy this set in February, or in July, or get it at the silent auction in November, but in my experience it sells only in DECEMBER. I am not making this up. I think architectural people give it to other architectural people when they want to make a big splash.

The final odd thing is my picker. As you know, he’s left the picking business to pursue farming, so I did not get the 28 boxes of gorgeous brand new, high end books that I count on to keep Christmas jolly. But it would seem that he’s become the gift that keeps on giving anyway. In the last two days I sold three of last year’s leftovers – one about Los Angles, one about Asian honey bees, and one on the canning industry. Guess which one fetched the best price? If you guessed canning industry you just won the golden bookmark. If you guessed that all three sold on Alibris, or one of its partners, you win two. The other small sites? I wouldn’t know as I’ve sold only on ABE, Alibris, my own site, and once on Biblio all month.

Though there are no more specific sales worthy of individual mention,  there IS one other good thing to report about all this commerce. So far I got to gift-wrap two orders for Christmas! It wouldn’t be Christmas if I didn’t get to rattle some fancy paper and unfurl a roll or two of satin ribbon, so even just two made me happy enough to help Brenda Lee sing Jingle Bell Rock while I played Santa. One was a book about England for a woman who is off to Oxford to study for her Ph.D. and the other a book about restoring a wooden boat, the recipient of which is a woman, but I don’t know the back story on that one. All I know is I love sorting through the pretties in search of just the right combination. I know – it’s time consuming, I’m not getting paid for it, the wrappings are costing me money – I’ve heard it all before. But the thing is I really don’t care. I love doing it and part of the pleasure of Christmas morning is thinking about the recipients opening their books all over the world. Actually, I think about every book I know for sure was a gift, whether I gift wrapped it or not. 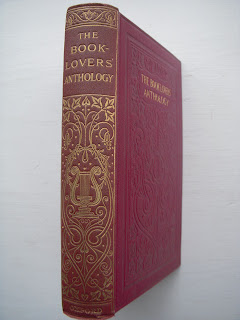 All this talk about Christmas commerce reminds me of something I read yesterday in The Book-Lover’s Anthology, edited by R. M. Leonard in 1919 (see photo above), a compilation of stories, poems, opinions, and facts about books turn-of-the-century style. I suppose it’s a one-eighty topic-wise, but I just thought of it, so that’s reason enough to share I think. Those of you who are booksellers will like it anyway. It’s by the philosopher, John Ruskin, whose been called the only Victorian more Victorian than Queen Victoria. Poet, artist, scientist, environmentalist, philosopher, he was a true renaissance man of the period. Ruskin believed in small-scale business, self-sufficiency, fulfillment in one's work, and the preservation of local crafts. Yay, Ruskin! So here goes:

"We ought not to get books too cheaply. No book, I believe is ever worth half so much to its reader as one that has been coveted for a year at a bookstall and bought out of a saved half-pence and perhaps a day or two of fasting. That's the way to get at the cream of a book!"

On that note, may Christmas be extra-creamy for us all!
Posted by tess at 3:53 PM