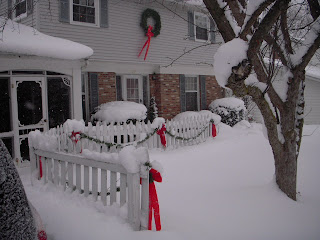 Once again, I’m a day late and a dollar short – literally -- and both because of the endless snow.   It’s very unusual to have such weather in our part of northeastern Ohio this early in the season, but here it is and it shows no sign of letting up. The reason I’m late writing is because I had planned on showing  you  something I got at Saturday’s estate sale only to find that I had stupidly taken it the antiques mall without snapping a picture. And of course, as neurotic as I am, I fixated on it to the point where I couldn’t think of another thing to say yesterday.  As for being a dollar short, that would be because my sales at the antiques mall flatlined yesterday for the first time. True or not, I blame it on the snow. I also blame any  flatlining today on the snow as well, just so you know .

I wanted to take a picture of the lake in this winter wonderland, but it  doesn’t look like anything but an expansive white carpet, so Eric went out and took the photo  above of our house festooned for Christmas.  He even turned on all the little white lights, but you can’t see them because it was nine a.m. Even though he had to go to the store so would be heading out anyway  I was not about to utter a complaint while I was standing in front of the gas fireplace in my sweats and fuzzy socks.  So we have the picture we have.

Snow may not be good for the antiques mall, but it’s very good for listing. There’s something cozy and quiet about it that suits the contemplation of books.  So today I am going to address the architecture books I bought from my customer when we went to Dayton.  I pulled out a few and took them to the mall (sold one) and sold another online, but most still sit in the cartons they came in. So I will be contemplating cornices, transoms, and dentil molding this afternoon in silent,white serenity. You do notice that I spelled dentil right, yes? Good. It makes me feel less architecturally challenged.

The other thing I want to do is list some of the better ephemera items from last week’s auction. There won’t be any auctions this week as Farm and Dreary lived up to its name, so I need to maximize what I have. Contrary to popular opinion, ephemera items actually do sell on book sites, especially Advanced Book Exchange, but I have also sold them on alibris, my own site, and, once in awhile on Antiqbook. The best venue of course was ebay back in the day when ebay was rational and loved their sellers, but that day is long gone, so no ephemera there. It’s okay though because ephemera has a magical way of finding its perfect owner. For example, last week on alibris (I think) I had an order for a 1920’s hardback book that was really a booklet about an American national checkers match (yes, checkers) and the man who won the trophy.  I know – that does NOT sound much  like a winner (pardon the pun), but I am drawn to that kind of stuff like a fruit fly to a ripe cantaloupe. I don’t care if I keep it for ten years before it finds a home (this one took a year) because it pleases me when it finally happens.  A very fun guy from Israel claimed the little book because – get ready for this! – his grandfather won the tournament and  died two weeks later . The pleasure of giving someone a piece of their own family history transcends the fact that I had to store it for twelve months. 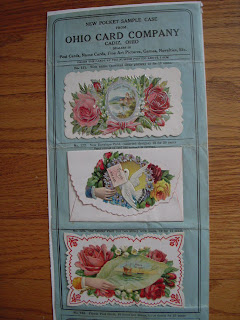 On the subject of ephemera, the item above is a classic example of a hard, but not impossible, sell on the book sites. I got it last week at the auction and am crazy about it because it’s from Ohio and its fragile nature makes the odds of its survival low. What you are looking at is a salesman’s pocket  catalog published by the Ohio Card Company of Cadiz which is still a small, rural area. The blue paper is printed on the back with info on font sizes and styles and various prices and such, while the front displays three actual products – two cards and a fancy envelope. A salesman could fold it up, stick it in the inner pocket of his suit coat and be ready at the first opportunity to move some merchandise. Cool huh?

Well, I just glanced out the window and it’s still snowing, so I guess I’d better stack up some  items to list and get at it. My office window is very long, almost to the floor, so the view is lovely from the second floor. But,even so, I’m still not singing Let It Snow over here.
Posted by tess at 11:48 AM

Beautiful picture! Is this your house? I love it. You find so many beautiful treasures...make me want to get out there and see some on those cards. I did find one on ebay once...a post card from 1908 from where Bill and I were married...just had to buy it. Will try to find it to share with you. Elmer Follower

Thanks! Yes, that's Casa Kindig, the house we weren't planning to keep and the one we've lived in for 23 years! We bought it to flip (though that word didn't exist then), but liked it so much in the end that we never moved. It's been "redone" and "redone again" --a work in progress. It was built in 1963 and we are the third owners. I actually met tthe daughter of the original owners when my daughter Caitie found her walking around the lake. They'd moved to California and she was back for a visit.

I would love to see your postcard. That old paper stuff never fails to spark my interest.