The One, The Only, The Definitive Book! 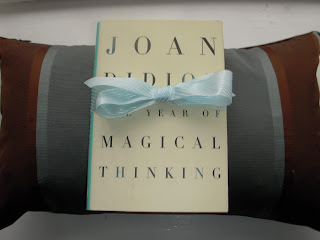 As work intensifies with the holiday season I find myself longing for time to read. I always think I will do it in the evening, but anymore I’m comatose on the couch by nine. I wake up at eleven, stagger upstairs, and wake again the next morning between 4:30 and five. By 5:30 I’m at the computer printing orders and from there the good times keep on rolling. My reading time is now compressed to the fifteen minutes it takes me to have a bagel and the first cup of coffee. Consequently, I have been reading the first volume of Blanche Weisen Cook’s two volume biography of Eleanor Roosevelt for almost a month. One thing about being a bookseller in the collector and secondary markets is you’re often at least ten years out of sync with the rest of the reading world. Normally I hit the library for the current hot titles too – you KNOW how much I love the library – but I haven’t seen the inside of it in at least a month and a half.


So when a blog reader sent me this link http://www.associatesdegree.com/2010/11/30/40-famous-females-and-their-all-time-favorite-reads/ it struck a chord so loud it sounded like Big Ben. As I scanned the list of famous women and their favorite books memories of past great reads – Jane Austen’s Emma, The Color Purple, The Year of Magical Thinking, The Great Gatsby, The Shipping News, Little Women, The Catcher In the Rye (the book my husband hates most!) and the often-banned children’s book, Are You There God? It’s Me, Margaret – cascaded like flowerfall in the spring. For a second I was a kid in the early 60’s home sick in my freezing, unheated bedroom reading Little Women under the covers and wishing I were Jo. Flash to 1969, and it’s my senior year in high school, and I’m in study hall (the waistband of my blue plaid uniform skirt illegally rolled), reading Salinger for Honor’s English at a Catholic girls’ school taught by progressive nuns. My best friend, who went to public school, wasn’t even allowed to read Salinger for an independent book report! Imagine – no Holden Caulfield, no Phoebe, no Esme -- but who would want to?

I must confess though that as much as I enjoyed this list, I am astounded that FORTY women somehow narrowed down a lifetime of reading to a single book. I suspect that some of them went with the last thing they’d read, or a classic, just to have a response. Call me a cynic, but as soon as someone says their favorite is Crime and Punishment I tend to figure they haven’t cracked open a book since high school. I know, I know – don’t say it! – some people truly do like Russian novels best. I get that. I really do because I liked Anna Karenina well enough, just not enough to have her throw herself under the train a second time. What I’m trying to say is it’s amazing to me that you can actually choose only one book. It’s sort of like buying a bar of Switzer’s black licorice and tossing out all but one bite. It CAN’T be done.

But of course it can, and it was, and the truth is it sort of makes me envious. I would love to be able to look back and point my finger on THE book, the rock-your-world, definitive, change-your-life forever book, but I really, truly can’t. Eric told me I was being too literal and that all that’s required is the first of my favorites to pop into my head at the moment of questioning. But that sounded to me like a cop-out, so I did an informal survey of my own. The answers invariably included at least two titles -- The Moviegoer and Truman Capote’s A Christmas Memory, Virginia Woolf’s To the Lighthouse and The Hours. And then I asked my youngest daughter. Without missing a beat she popped off an answer.

Email ThisBlogThis!Share to TwitterShare to FacebookShare to Pinterest
Labels: Favorite books. Reading. The pleasure of reading