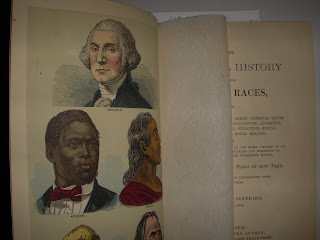 Crazy days are  here again! The orders have slacked off in number, but the dollar value is holding, so I was happy to allot the entire day yesterday to a project which might make you say, “this woman has too much time on her hands.” It's five-thirty a.m. as I write this and we are off to Michigan for our oldest grandson’s seventh birthday today. Huge high-jinks involved there, including tickets to a matinee of a Broadway production of Mary Poppins in Detroit, following by the whole family converging on our daughter’s house for a birthday bonanza. We bought him a fancy Legos set and a battery operated card shuffler, the latter because I think our early morning Uno games demand it. Between us that child and I are in no danger of landing a job in Vegas.  For every occasion Tyler makes me a card, so I figured  it was high time I made him one too. I grabbed a few pieces of card stock, some old ephemera, the cotton from inside a jewelry box, wide silver ribbon and an old broken watch and set at it.
While I worked I thought about something I heard years ago from an old bookseller who told me that the fastest way to sell a book that’s outstayed its welcome is to get involved with it. Pick it up, rifle the pages, pull out an interesting bit of info to add to the description, change the price, take a picture –anything. I wonder if I was subconsciously channeling that the last time I posted. Remember The Book-Lover’s Anthology from which I quoted Ruskin? Not only did I write about it, but I took a picture too -- and guess what?  After four years in my company  it was ordered on Advanced Book Exchange the  SAME NIGHT  I wrote the post. Did the sale have anything to do with its appearance here? I doubt it greatly. It’s not like mobs and hordes descend daily to read my breathless prose. No, I’m leaning more toward book magic.
Here’s why. I told my friend Nancy about the coincidence in an email yesterday morning. Nancy does marketing and PR for a non-profit, so of course she’s always thinking of how to stir up activity. No surprise then when she suggested I do it again, only this time pick a REAL shelf sitter and write it up like it were the only printed copy of Oprah’s latest book club choice. I pondered it awhile and finally decided to go with The Natural History of the Human Races which has been here since 2003.  As directed, I  picked it up, looked it over, put it back, and then knocked off early to do a little Christmas shopping. When I returned later in the evening my voice mail held a message form a long-time customer from Philadelphia,
“Tess, I want to pay for the three books you’re holding for me, but I’m also wondering if you have anything on the evolution of mankind.”
No way! No WAY! It was not possible. I marveled over it all evening and  called him yesterday morning. You will NOT believe what happened next.  I told him it was written by  John P. Jeffries of  Wooster Ohio in 1869 and had some nice color plates.
“That’s IT!” he shouted, cutting me off. “I can’t believe it -- that’s the exact book I wanted to buy ten years ago. I was at a used bookstore and  saw it at the same time a professor from the University of Pennsylvania did.  I figured he might need it more than I did, so I let him take it and have never seen another one.”
If you think that’s amazing,  just wait -- there’s more. Last week I impulsively decided to take an Ohio title I’d had for a year to the antiques mall since Ohio titles seem to sell well there. It’s a topographical survey, but filled with extra letters by and from the author seeking and receiving specific additional  information. I had taken it to the antiquarian show last spring, and though it had lots of lookers, I didn’t sell it. So I decided to cut the price to $50 since I didn’t have much in it and just get rid of it. Mission accomplished - it sold at the mall last  Friday. Today, however,  I got an order from Biblio for the same book only priced at $150. My first response was to berate myself for being so hasty, as well as for forgetting to take it offline. But as I read the description realization slowly dawned. The order was not for the book I had taken to  the mall. The one at the mall had originally been $30 and in “dropping” the price I had actually raised it to $50! Quickly I located the expensive copy and saw that it had a slipcase, a huge map on linen, many more letters and was signed by the author because it was HIS own copy. So by moving the one book I sold two, one at full price and one higher than the original price.
Of course  there’s probably  a statute of limitations on this bookselling technique and I’ve maxed  out my share for awhile. But I think it would be fun if we all tried it and reported back our success, or lack thereof. What do you think? Well, mull it over while I’m in Michigan. I’ll be back tomorrow,  but accompanied by the entire Michigan entourage, as we have to go to a birthday party for Eric’s 93 year-old aunt.  I’ll check in at some point though. Let’s make some magic!
Posted by tess at 7:48 AM

That's what I call The Hundreth Monkey Theory, and Bill says things just come down. I love the idea of book magic though. Have a wonderful joyous journey and don't forget to check in to see us while you are away.
Happy Holidays if we pass in the night, ginger and bill
gettingafoothold@blogspot.com

I remember the Hundredth Monkey from college -- it had to do with washing bananas as I recall. Sorry not to have checked in -- it was CRAZY and baby had a cold to add to the whole thing, so if I am still hale and hearty by the end of the week it will be a miracle. Today I am off to the community center where I volunteered for the WHOLE day. So I am hoping to hear from more people who want to try out my technique. I am going to try again myself, though the timing is not optimal in the countdown to Christmas.