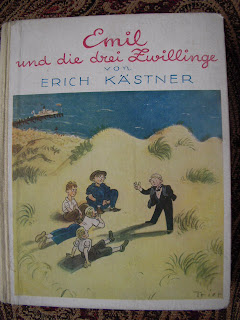 Okay. This is getting crazy. I’m on a three day posting schedule against my will! Tuesday night I was felled like a giant Sequoia by a virulent stomach bug brought to me for Christmas by the Michiganders. My oldest daughter had it last week, her mother-in-law who came with them, got it Monday, and Tuesday was my turn. It was only today that it occurred to me I might live another day or two. Actually I’m sort of well really, just not well enough, as my interest in coffee has gone so far south it's hovering somewhere around Atlanta. ME not interested in coffee!!! All I can say is this better change by tomorrow or you won’t be able to stand me.
Anyway, I’m well enough that I actually dragged myself off the couch, got dressed, and went to an estate sale – an hour late. You would think this would be a problem, but I don’t really think it was, due to the fact that estate sales never seem to be scheduled over the Christmas and New Year’s weekends .The ad even began “Surprise! Surprise!”, but I’m thinking maybe not so many people were stunned with joy given the small crowd and the large number of books left. Had I been shopping only for the internet I would have bought just three volumes – two art books and the one good one I’ll get to in a minute. But I’m shopping for the antiques mall too these days and that changes everything. I LOVE being able to buy books that strike my fancy – books about exploring the spice trails of Arabia, identifying marks on American silver and pewter, the drawings of Kaethe Kollwitz, and  collecting kilims --  knowing that I can realize a reasonable return on them that would be impossible on the internet. Anymore it’s getting to be a limbo dance in cyberspace – “how looooow can you go?”
But that’s another story for another day. The important thing here is “bookdar”, the term my buddy Sunday Morning Joe and I have given to that weird radar that draws you to a book you’ve never seen before. As experienced booksellers know, when it’s buzzing at high speed  magic happens. (Speaking of magic, no, I have not sold the fishing book yet, but that’s another story for another day too). My bookdar was on this morning, but I wouldn’t say the electromagnetic waves pulsed at top speed given my weakened condition. Yet even so, it drew me to a 1935 children’s book written in German. The only time I buy foreign language books is when the bookdar declares them worthy. The last time was this summer when I purchased Jugoslavien, Slovenien, Kroatien, Dalmatien, Montenegro, Herzegowina, Bosnien, Serbien which I featured here in a post. It sold at Christmas for $150. So when the bookdar faintly bounced off this cute little book it got my attention. Besides, it was only five dollars, so it wasn’t exactly a grand jete  in the dark.
The book is entitled  Emil und die drei Zwillinge by Erich Kastner and was published in 1935. My knowledge of German is fairly pathetic, so all I knew was that I was buying a book called Emil and the Three ---- somethings. Turns out it was the three twins and is the sequel to Emil and the Detectives, a book which played a major role in the creation of the children detectives genre. The latter was a huge hit in Germany and its author was one of the great intellectuals in Berlin, which of course meant he and the Nazis weren’t exactly swapping stories at the beergarten. In fact, many of Kastner’s books for adults were turned to ashes in the massive book burnings. My copy of his second children’s book is the first edition of which there are only two comparables on bookfinder (one other is signed so I am not including it) with values at $95 and $115.
All told, not a  bad day’s work for a coffee-deprived sickie.
Posted by tess at 6:14 PM

I just love the cover art on this even if I couldn't deciper the book.

I know -- me too. I was so charmed by it and it has GREAT "book feel" as well, plus it so wanted to go home with me. I'm delighted it did, but i like it for its own self as well as its value.

Thanks for sharing your reflections from the year, and I echo your desire to acquire inventory more regularly, although I am still backlogged right now, like a squirrel who stored his nuts for the winter. Sorry to hear you left Ebay...do you sell on Amazon at all or only ABE? I know exactly what you mean about the escalating fees. My 20% discount due to Silver status came in handy last month, but the monthly fee totals are still staggering.

I think this was in reference to a different post, but that's okay. I sell on ABE, Alibris, Biblio, antiqbook, Choosebooks, my own site, and at the antiques mall. Oh, and my secret site. :-)