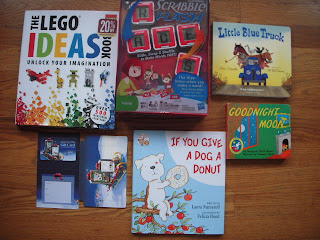 Unlike most Americans, we skipped the-stand-in-line-to-gobble-up-cheap-Chinese-imports-for-Christmas thing. We didn’t even venture out on Saturday. As far as that goes, I wasn’t entirely sure I wanted to shop on Sunday either, but we did because we really do need to get on with it. Interestingly enough, the crowds and mania I feared failed to materialize. In fact, I would say that most stores were no busier than they’d be on any Sunday afternoon and Panera, where we tend to have lunch most Sundays, was MUCH less crowded than normal. You would think, given all that, that it would have been festively fun. But it most emphatically was not.

We decided to concentrate on our little boys for this trip which of course required forays into the big box stores I loathe more with every passing year. But how else does granny buy Lego creatures with a strange name I can’t remember, electronic Scrabble cubes, and other such wizardry? When it comes to the most desired toys the big guys pretty much have you by the wallet. Since Borders closed this year we had to go to Barnes & Noble for books which, thankfully, appeared on the list for both kids. But I so dislike that cold, slick, escalatored emporium that I try to run in and out at supersonic speed. I did get a couple books for Dylan, but Tyler wanted the first two Ridley Pearson novels for kids in The Kingdom Keepers series (which somehow has something to do with Disney), but they had neither one in hard cover. The saleswoman gave me the hard sell, first trying to convince me to buy the paper edition, then wanting to order the hard cover online for me. I told her I could do it myself at home, but she insisted it would be better if she locked it in for me. Guess how much I loved THAT?

Not only did the strong-arm tactic fail, but a small bookstore in Ohio emerged victorious because of it. I got home and thought to myself what if I were to buy them on the secondary market and get one of them signed by Ridley Pearson. Two second after I thought it that’s exactly what I did. I bought via Advanced Book Exchange a fine/fine signed copy from an Ohio dealer, Books of Aurora. Did I pay more? Yes, I did. Do I care? No, I definitely don’t begrudge the extra three dollars. I would rather buy less stuff and support small, independent businesses any day. So actually the whole debacle ended up well if I may say so myself. As for the big box stores, they’ve seen the last of me this Christmas. I bought from Target, Barnes and Noble, and Marshalls, but that’s it. Not another dime goes to any of them even though I’ve barely scratched the surface of my shopping list.

I was thinking about all this this morning when I glanced down at the newspaper and saw a headline which read “Black Friday’s Black Eye.” According to the story, the devious head games the mega-merchants play with their hype, loss leaders, and ever increasing sale hours resulted in escalated violence at stores across the nation. Immediately an image I saw online Saturday popped into my head. Someone had snapped a photo in a checkout line of a shopping cart piled, heaped, and mounded with cheap imported junk and a small baby asleep in the midst of it, off to one side as though she were taking up precious space. I really hate when I rant and I guess this qualifies as a rant, but I truly do think there’s a better, saner way to buy Christmas presents.

Speaking of presents, the antiques mall did very well on Saturday – better even than last year -- so I am very grateful to those who supported us. Sunday returned to a normal Sunday pattern, but I knew it would because we went by twice on our way in and out of Montrose and the number of cars in the parking lot didn’t dazzle me either time. I just hope that once we get over Black Friday and Cyber Monday we can collectively reacquaint ourselves with antiques shops,  old-fashioned hardware stores, galleries (museum galleries have great gifts), toy shops, specialty stores and of course – new, used, and antiquarian bookstores.

I think if we slow down, enjoy the experience of browsing in peace, and put more thought into what we give we just might have a happier -- and more human -- holiday.
Posted by tess at 10:04 AM

Thank you Tess. You have put into words the feelings I have towards going out into that wild world of pre-Christmas stores. I have not shopped at Walmart in years, although I do go to Target. I applaud your efforts to shop at the smaller, independent stores.

Oh, I think it would be a nighmare to go out in that. I can't even imagine it, but when you're a bookseller you get more than enough of line standing anyway! :-)

No Wal-mart for me either, though I do occasionally go to Target. It's been kind of fun poking around online for small sellers. I also plan an excursion to Shaker Heights where they have lots of small stores. That should be fun.

I think that supporting both small stores and those friends who are trying to keep their businesses alive these days is so important. I do hope the holiday will be successful for you. It seems that sadly in our economy that has become the true meaning of Christmas. I guess we can fight that, and keep the meaning of life, love and friendship alive. God is love and he has brought us so many gifts already, including each other.

Yes, that it's -- we keep plugging away. Are we going to change it? Probably not hugely, but small inroads do count.