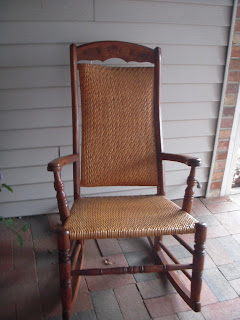 Sometimes life surprises you in odd ways. Would you believe I actually got a chair for the mall after all? I doubt very much it had anything to do with me and my invocation to the furniture gods yesterday, but you never know. One of the estate sale people at the sale where I got my two chairs inquired as to whether Eric would like to purchase the leftover books for the store at an extreme price reduction. Unless you have an open shop you wouldn’t want these even though they’re all popular fiction in bright, attractive, pristine condition. I don’t know how many books he got, but it was around ten big boxes and he paid $25 for the lot! While he was there he noted that some of the things we liked were still present, so he inquired about them too. As it turned out, the only item unsold was the rocker. The rest were accepted bid items which were to be picked up in the next few hours. But I’ll take it, as it had been priced at $175 and last night was marked down to $50. Ah, life is good in Medina today!

I am so revved up though you’d think I was a NASCAR driver at race time. I got up at 4:30 and had ten books listed and uploaded to the various sites before Eric left for the store. My task now is to get a LOT of books ready to go to the mall for this crucial weekend. Sales have picked up again somewhat there, so a spark of hope burns as merrily as a Yule log. I have some very cool stuff and I’m going to decommission a couple online books too because I’m sick of waiting around for someone to buy them. Online selling is so tiresome anymore. How I long for the good old days, but I doubt greatly they will be returning anytime soon. Let’s not talk about THAT though. I’m in a good mood and would like to stay that way.

The mall Christmas sale is on too, so I want to take part in it this year. Last year we opened the day after Thanksgiving, so it was too wild and woolly to even think about it, but this year it’s definitely doable. The way it works is you pick up these red and green tags and you put one on any item you want to include and mark the discount anywhere from 15 to 50 per cent. I have several sets which need to disappear to clear up some much needed space, so they’re what I’m aiming to highlight. I’ll have to do the work at the mall of course, but we plan to spend some time sprucing up anyway – vacuuming, dusting etc. I would like to decorate for Christmas, but you can’t bring anything but vintage stuff to do it and I don’t have any vintage Christmas stuff. I guess I could bring a little garland, but it would hang down over the books which is not so wonderful, so I guess we’ll confine our cheer to great prices on books that need to be under somebody else’s Christmas tree! But next year remind me to get in gear early and get some old Christmas do-dads.

As soon as we finish at the mall we have to run to the grocery to load up for Thanksgiving, as I’m chief cook and bottle washer again after one year off. For the first time ever we won’t have our younger daughter Caitie and her boyfriend Joe here. They live in  Maryland now and she has to fly to Canada for her job on Monday, so it's not really feasible to make such a long trip.  Today’s her birthday too, so I could get pretty funky over it, but am determined not to. I’m focused on the little guys because it’s also Tyler’s birthday celebration – eight years old this year! How can it be????? I’m doing turkey with all the trimmings of course (Tyler and I like the cranberry sauce best), so tomorrow when I’m not here you can visualize me down in the kitchen slicing and dicing. Actually, I’m pretty  into it this year. In fact, I may even bake Christmas cookies with the kids Thanksgiving afternoon even though Dylan, the little turbo-engine, will create a perfect snowstorm of flour and sugar. But, hey, that’s what they make shovels for, right?

Before I go I have to give you at least one picture of something made of paper, so here’s a photo of an ephemera item I bought at the least desirable estate sale Saturday and completely forgot about due to my dizziness over the chairs. I found it in one of our bags this morning and listed it at $45.As you can see, it’s a Notre Dame football program from 1948 – Notre Dame vs. Northwestern. Great year for the Fighting Irish too, as they ended the season undefeated along with the Michigan Wolverines. Check out the full page color national ads too – isn’t that something? 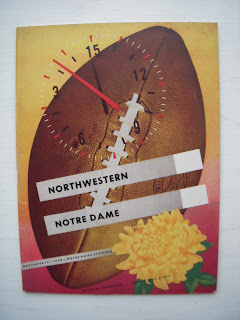 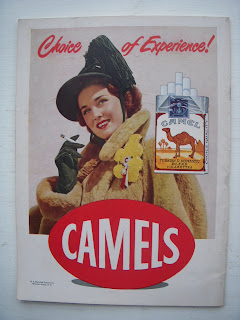 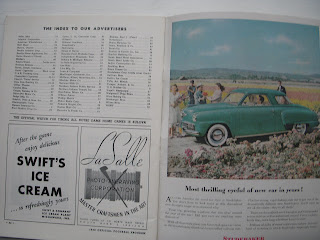 On that note I’m headed for the basement workbench. But first I just want to say that I am so grateful to you all for reading my silly stories, writing  me comments, and generally making me feel like it’s all worthwhile. Happy Thanksgiving everyone -- I appreciate you more than you know.

P.S. Darwin just checked in to say that yesterday's featured chairs are contemporary with influence from the Directoire period. Well, who knew?! He also liked them which is a very good thing!
Posted by tess at 10:20 AM

LOVE the rocker! Is it really going to the mall? I hope it is still there by the time I get over there again to sit in it.

Yes,yes! The rocker is going to the mall in 45 minutes. I just wish it would stop raining. This is exactly what it was doing a year ago tomorrow when we moved in. Oh, I'm sure it will stick around. The last one was there awhile.

That Camel advertisement in the football program is bizarre. You've got this co-ed in a hat that looks like Mr. Everest, burnin' one down at the ol' football game with her corsage at the ready. No wonder we could never relate to our parents while we were growing up. Look where they came from!

Once again, you're good for an early morning laugh. Oh yeah, she's something all right -- love the gloves that match the hat.

I'm glad you had such a nice Thanksgiving. This was a special one for me. I spent it with my daughter, son-in-law and my first grandbaby - 11 weeks old. Blessing overflow.
Love the rocker.

Lovely Tess. I imagine it was a marvelous dinner as everything you touch is magic! Happy Birthday to the 8 year old.
I would love to buy the Notre Dame paper if it is still available. Please let me know how to do that. Hope the weekend is a great success. I love all three new chairs. gin

Oh that's wonderful, Hilda. There's nothing like a new baby for the holidays. Or anytime. Love those babies! Being a grandmother for the first time is wonderful too. Every time (I have two) is great in its own way, but the first time is a rite of passage. Congratulations!

We had a fun Thanksgiving -- just look at the glass top on my coffee table and you can tell -- jelly, pie, scrambled eggs and butter -- and that was just this morning! :-) They're now on the road back to Michigan!

I'm glad it was

Thanks for your interest in the the Notre Dame program, but it's already spoken for! Im, so sorry. This is what comes of taking a day off and not being up-to-date.

Hope you and Bill had a good day. Ours was noisy, messy, wild and woolly! But a good time was had by all.

You told me to be sure to blog daily! And read your blog too! My loss. Next time. Enjoy the weekend sales!

No weekend sales during the holiday! What a relief.

Oh, I don't blog every day. It's the ideal, but it's not always feasible. Stuff gets in the way ... and then sometimes, like today, NOTHING gets in the way. Today I was in recuperation mode!