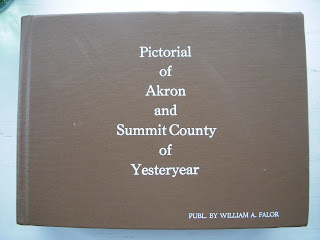 Last week was a whirlwind of activity with the Halloween trip to Michigan, two book sales, and an extremely busy and good sales day on Friday that kept me hopping. If you saw me flying around filling orders you’d think you’d just emerged from a Time Machine and were observing the bookseller circa 2005. I have no idea what sparked it, but I’ll definitely take it, as the mall performed dismally this weekend – the worst since I opened there a year ago this month. I could get crazed about it, but I’d rather think about the surprise collector and the magazines on Friday and the fact that also on Friday I sold a $400 book on ABE purchased from the late, great, and infamous Elmer.

As for the book sales, both were ho-hum, but both also were less well attended than normal, particularly the big one we went to on Thursday night. This used to draw sellers from as far away as Vermont and Pennsylvania, but not anymore. Even the local scanners have dropped off some. There’s any number of reasons for it, but I think what bugs the serious sellers is the rampant pre-picking, the crazy pricing, and the general decline in truly worthy, collectible books. They did have a table of specials and a couple actually were quite good, but the prices were terrifying. My bookseller friend Paul took a flyer and bought one for $50, but only because he wouldn’t mind keeping it for himself. As it turned out, the price was good enough to sell online. But the one I wanted was $100 and what scared me was the fact that even the ex-library discards had been marked to the rafters. Having said that though, Eric made a deal on a 17 volume set about Ohio geneaology which he wanted for the store. The asking price was $135, but somehow he got them for $50. I guess he must have convinced them that online sellers wouldn’t want to deal with them, nor would most buyers. I don’t know – I didn’t get involved in it.

What I did get – and Eric again scores for finding the best underpriced book in the place – is a signed first edition of this VERY scarce Akron title – Pictorial of Akron and Summit County of Yesteryear. I had one once, but never saw another until he came over holding it and said, “Isn’t this a book you like?” The man’s a master of understatement. So for $8 we scored a $125 book. Other than it I got some stuff, but would be hard pressed to tell you what it was without unpacking it. No, that’s not true! I got a German children’s book by Erich Kastner, the same author of the German children’s book I sold earlier this year for $100. This one isn’t a first printing, but neither was that one, though both were from the first edition. Trouble is, I can’t find an early copy to use as a comparable – just paper reprints. What REALLY frosts me though is the way this library and others slap stickers on the faces of older books. I tried so hard to remove it from the delicate paste-on cover art and still it wound up defaced. WHY do they do this???? (see below) 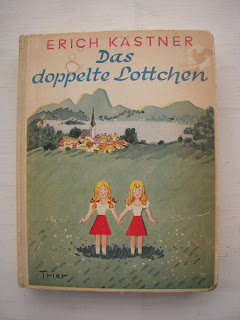 The second sale was on Saturday. The only reason we went is because there wasn’t an estate sale worth touching with a ten-foot bone folder (I know, I know – but I love book repair tools and I never get to work them into a conversation). It’s always been a small affair, but this time it was Lilliputian. The books numbered in the low hundreds and the number of buyers might have been ten. This one never did entice a crowd, but there was a day when two sellers from Pennsylvania never missed it. Eric got maybe ten books for the store and I bought three, all in the $35 range which is good for this sale. I especially like this one pictured below about portrait painters from the Ohio Valley. Oh, I did get one other thing – a horrible allergic reaction to something there. My eyes burned and my sinuses screamed and it didn’t get any better until late in the afternoon. I have no idea what it was, but it sure made me sorry I made the effort. 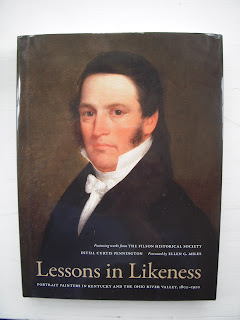 This week we are going again to the sale we went to last year in Dayton. I am not holding out a lot of hope though because they published a list of silent auction books that are anything but glorious. Last year I won two items – that gorgeous architecture set and the beautiful (and still not listed) copy of Emily Dickinson’s  herbarium published by Princeton University. I doubt I’ll bid this year which means we better make it up in underpriced hidden treasures. It probably won’t prove to be a money-maker, but we’re going there also because we love staying at the beautiful downtown Dayton Grand Hotel (which last year was a Doubletree) and having dinner in the historic district with our friends from Medina, Charlie and Mary Lynn. So it’s a little mini-getaway as well as a business trip.

I’ll try to write another post before then, but I am working frantically to list or store all the books I have acquired lately so my office can return to its former beauty before the next onslaught (providing there is one). At any rate, I’ll at least post something small. Promise.
Posted by tess at 1:21 PM