The Bullish Marketplace: A New Perspective 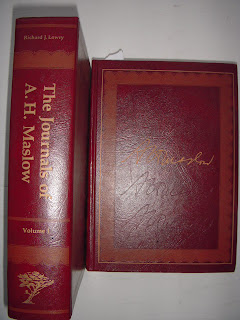 The phone rang last night. Just after dinner a volunteer from the Dayton sale called to inform me that I had won an auction. Not auctions. Auction. Singular. I got the pretty leather volume from 1852, Companions of My Solitude. I was happy of course, as this one spoke to me in dulcet tones, but I was  oh-so-disappointed over the Steinbeck. And yet I’m not as deflated as you might expect, as I think my bid on the Vonnegut approached the danger zone. In a sense I ended up with a double win – the book gods saved me from myself!.

After I posted yesterday I sorted through the many boxes and isolated all the store stuff which consists of most of what we bought. I wound up with three boxes, two of which are headed to the mall and one small one online. That’s the way it always is though because I don’t list much other than ephemera at the lower end of the spectrum. If it’s not at least a $20-25 book it doesn’t get listed unless I like it a lot, or can sell it on my secret site where I pay no commission. Years ago we sold much more volume, but these days I’m operating on a model that sacrifices quantity for higher selling prices. 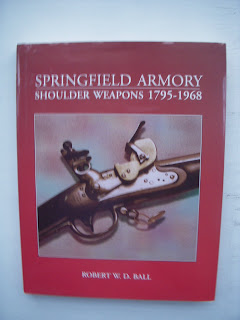 Even so, for such an enormous sale I expected to acquire more than I did. But I’m not complaining TOO much, as I excavated several books I had forgotten about, including a wonderful two volume set, the Journals of A.H. Maslow, the famous psychologist noted for Maslow’s hierarchy of needs. It’s a pyramid that outlines what a self-actualized person requires to live in harmony with herself. I would try to list them all, but I doubt I can, so just know that it’s a very sensible thing and the guy was no slouch. The set lists for around $125, so I’m even happier with it than before. The other goodie is Springfield Armory; Shoulder Weapons 1795-1968. I have no affinity for weaponry, but over the years I’ve acquired just enough knowledge to let me pick those gun books with the rest of the guys! This one sells for $90 and I paid a modest $3. 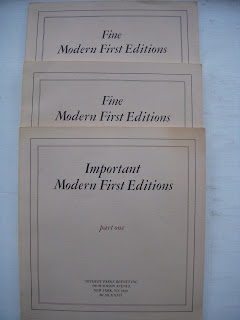 I think the thing that gratified me most though was a sleeper I got while trying to wend my way through the boxes, bins, and body parts in the art department. I made it to the fringe where I caught up with Peter, a seller I like from Cleveland. He, too, had failed to negotiate a look at the wares, so we stood at the edge chatting as we flipped through a couple small boxes of art ephemera which also contained literary ephemera for some odd reason. I glanced up once just as he picked an index to the early Paris Review. Oh! I WANTED it, but I went back to my own box and eventually struck gold. I didn’t exactly know it, but I had a hunch that the three soft cover volumes from Sotheby’s, Fine Moderns First Editions from the Collection of Jonathan Goodwin were good. OMG, the guy collected everybody who was anybody and the catalog is peppered with photos and descriptions that would make you want to hock your house to get in on the action. Best of all, the previous owner had penned in the realized prices. I looked the set up on Abe and there are only a few listed, all at $95 by ABAA sellers so I’m settling in at the same price. It won’t be fast sale, but who cares? Meanwhile I might learn a thing or two. 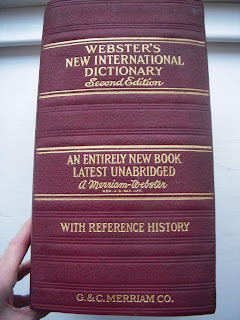 The other thing I got that’s laugh out loud funny is my famous, and even infamous, 1934 gazillion pound Webester's New International Dictionary, Second Edition. I got one last year and had a picture of it on here for some reason and then wound up selling it at the mall. I will probably take this one over there too because it would cost a king’s ransom just to ship it down the street. But what a glorious thing it is! I LOVE this dictionary! I can’t believe I forgot it, as it was one of the first books I chose in the specials room. But that’s what happens when you get brain freeze – you can’t register a thought, much less a memory. 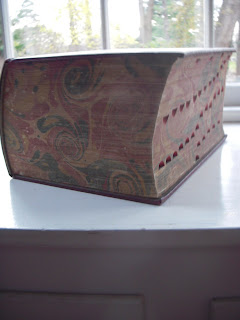 Speaking of the mall, sales have improved a small bit (emphasis on small), but I no longer have a chair again. Yes, the second chair sold Friday. Remember how I was going to pick an uglier one than the first one so it would stick around for customers to sit on as they browsed the lower shelves? Well, so much for that idea. Now I need to buy furniture again. Not only do I need a chair, but I still have space where the immigrant trunk was. I can’t remember if I told you about that, but we had one – really cool too from Scandinavia, hand painted on the front in beautiful script that read North Amerika. Furniture is good for three reasons – when it sells you can make money if you buy it right, it adds interest to your booth and draws in non-bookies, and provides customers with seating and you with display space for special items.

Which is exactly how my beloved Alice Undergound in the slipcase with the color art got stolen!
Posted by tess at 8:09 AM

Yeah, the chair got sold one day before we decided to spend some time checking out the mall! What! No chair, I exclaimed. I can take in other booths of disorderly chaos and immediately ascertain that I desire none of it, but with books I need time and a little comfort. I'll be back as soon as you let me know seating is available.

Yes, it's hilarious because Thursday when we left for Dayton I dropped off books and one of the workers told me what a good idea it was to have a chair because people are always sitting in it. And the next day it was gone! I will alert you as soon as said chair can be found. You know how hard it is find one though ... so you may not be at the mall for awhile! I'll give it a serious effort though.