Halloween and the Aftermath 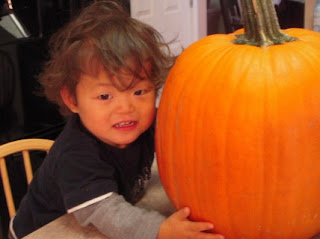 We’re back from Michigan! Got in last night around six and, as predicted, crashed on the couch for the duration of the evening. We didn’t even pass out candy this year to the trick-or-treaters because we were literally Halloweened OUT! The pumpkin carving proved to be its usual annual success, as Tyler, who is eight, pronounced Papa the best pumpkin carver in the world. The little one, who is two, literally grabbed the biggest pumpkin we brought and bestowed upon it a hug so enthusiastic it’s a wonder it didn’t explode in orange profusion all over the beige and white kitchen. The amazing thing was that he stood on a chair and scooped out the insides for over an hour – THIS from a kid who doesn’t normally stay still for two seconds. At nine o’clock that night he was still wide awake crouching like a downhill skier on the edge of a sofa cushion screaming “Tree! Five! GO!”,  before leaping onto a row of three pillows he’d lined up on the floor for a crash landing. 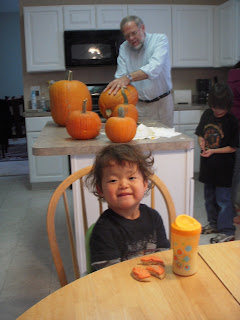 The next morning bright and earlywe headed to school, about a block away, to watch the entire kindergarten through fifth grade march around in their costumes. By far the funniest was a pint-sized Dorothy from Oz in a blue gingham pinafore and sparkly ruby-red slippers which sported clearly much-loved little heels. No braids and Kansas corn for this one! She flipped the ends of a long blond wig with one hand and toted Toto in a designer bag with the other. After the parade made two revolutions we left for breakfast at Coney Island around ten, came back to collect Tyler at noon, and then headed off to the Toledo Zoo. Halfway there (it takes an hour from Ann Arbor) the sky darkened, the clouds opened, and rain fell coldly and miserably. But did that deter the little zoo-goers? No it did not, nor did the fact that there were only six cars in the entire parking lot. Given a choice we’d have declined the adventure, but where the little people goeth there goeth Gran and Papa. As it turned out, Tyler was thrilled because we had two umbrellas in the car and he had never before used an umbrella. Also, the lack of an audience meant that not only did the animals come out, but did so spectacularly. Our little one screamed with delight at the sight of a mother elephant and her baby up close and personal, so of course that made all the difference. How can you complain about being wet, cold, windblown and miserable when a wild-haired two-year old hollers, "Hi babeeee! Hi babeeee!" and throws a baby elephant extravagant kisses.

Of course a trip to Michigan invariably extracts a price of another kind in the form of orders which arrive in our absence and demand immediate attention. I easily gathered everything (ABE and Biblio) except for one piece of railroadiana that I KNEW I had, but couldn’t find. After much running up and down the stairs Eric insisted I stop looking and have a glass of wine while he made spaghetti. Too tired to argue, I finally gave in and sat at the island rending and gnashing while he cooked. I had had two similar titles of this manual from 1944, each with some of the same, but also some different, numbers of time control mechanisms. An order for one of them came in several weeks ago when our daughter Caitie was here and she somehow noticed that I had matched the wrong copy to the order  -- which was easy to do given all those wretched numbers. I remembered going back for the right one, but had no memory of what I did with the wrong one which was NOW ORDERED!!!!.

First thing this morning  I popped out of bed at five and went off in search with new vigor, only to turn up empty again. So I wrapped the orders that needed to go, including one that came through while I was wrapping, and Eric bore them away while I sat glumly in front the computer wondering what I had ever done to cause the book gods to retaliate by wrecking our Halloween afterglow with this much STRESS!

And then -- out of nowhere -- came a memory. Though blurry around the edges, it filled me with new hope. Had I placed the wrong book on top of the computer tower so I could return it to its storage box? I jumped up, removed an 1898 paperback called Secret Service by General La Fayette C. Baker, a beautiful 1920’s vintage book about the Columbia River which shouldn’t even BE up here, an envelope of postal ephemera, a picture of me and my writing group at Dandi’s daughter’s wedding, a coffee mug with dregs from Sunday morning, and a new box of paperclips. And there it was.

One of my methods of searching is to think. Before you run in circles very many times, think. The gods like thinkers.

Ah, the gods indeed do, as evidenced by my sitting here at the cpmputer as Caitie was when she told me the numbers were off. From there I had a kinestheic memory of (perhaps) putting it on the tower to my left, which is what I do with anything I am not using at this moment, but don't wish to have lost. And voila! So, once again, your wisdom prevails.

Better yet, is to let your brain do the the thinking. Our brains are usually much smarter than we are, and they remember much more than we do. I think that this is what you did. Bravo. In any event, bravo.