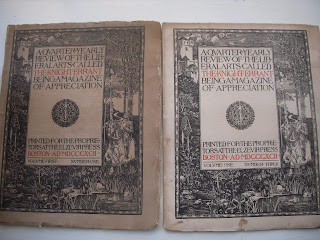 This is utterly amazing. AMAZING!! Remember last month when the guy ran across my blog about the Chinese autograph book and called wanting to buy it? Well, it happened again today, only this time it’s the medievalist magazines I bought at a book sale in Cincinnati, Ohio a year ago last summer when we were there for our wedding anniversary. I wrote about them some time after that and then a few weeks ago submitted a variation of the post to the NOBS newsletter where it appears in the current edition. So it’s funny that this happened right now, especially because, like the autograph book, the magazines have never been listed.

Again, I answered the phone to a very nice man, who told me he chanced on the blog through google and couldn’t believe his eyes, as he’s been searching for a copy for years (I have two). I know for a fact it wasn’t an exaggeration either because The Knight Errant only had four issues of 500 copies each before going belly-up. I’m telling you, this was one déjà vu experience! As with the Chinese autograph book, he badly wanted them and I badly wanted to be sure that he was the right guy to have them. His interest lies in the cover art which was rendered by the architect Bertram Goodhue who designed the capitol building in his state. Not only does he admire Goodhue who worked on the designs of several New York City Episcopal churches with Ralph Adams Cram who himself designed the imposing Cathedral of St. John the Divine and was involved with the magazines as well, but he knew enough about Goodhue to park me in a chair. As you may recall, I do not sit down to talk on the phone. Unless the caller offers up something so fascinating that I’m mesmerized I prefer to wear out the floorboards.

Well, I was mesmerized all right – in fact, I was fairly stupefied. As the words, the anecdotes, the stories of his own travels and reading to learn about Goodhue and the medievalists poured out I knew without a shadow of a doubt that the book gods had not only given him a nudge, but had even dialed my number for him. The call came in this morning -- hours ago -- but I’m still reeling from the serendipity of finding yet again another serious collector whose passion for a rare item transcends monetary value.

Could a bookseller BE any happier?

Rare is right! Four issues of 500 copies? Goodhue must be smiling from his lofty cloud that someone cares enough to track down his illustration -- and that you still have two copies.

Yeah, they truly are rare, so to have found them in the gym of a middle school in Cincinnati is pretty unlikely! Actually, I just had the two and he bought them both, so I'm out of srock on that one and probably will remain so. The odds aren't good!