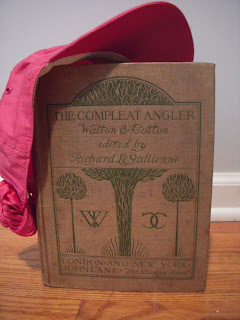 I’ve been thinking of this blog since I got up this morning – late at 5:30. From then on it’s been one continual race, as I had to wear two hats today, that of P.R. person and that of bookseller. I haven’t had the first hat on since my last outside employment which I finally quit in 1993. In its former incarnation my PR hat was a very sleek and chic sort of thing – the kind of hat that makes many statements that may, or may not, be the truth on behalf of the client who provides it. Those who knew me then thought it fit me to a tee, but they were oh-so-very-wrong. Just because I did it and did it pretty well did not mean that I liked it. In fact, I hated it very much. So doing P.R. for the 30th annual Akron Antiquarian Book and Paper Show coming up in April required some major hat renovation.

After much nipping, tucking, and stripping away extraneous froo-fraw an entirely new hat emerged. It’s the kind you hang on a peg when you come back from a day’s fishing – honest, basic, and strong enough to keep your head from getting sunburned. Not that I’ve ever been fishing, but I think if  I DID go fishing that’s the kind of hat I’d want. At any rate, I wanted to put it on as quickly as possible today, get comfortable, and write up something for the FABS newsletter (Federation of American Bibliophilic Societies) about the upcoming Akron book fair in April. This is a very special fair for several reasons, not the least of which is the fact that it will the 30th annual. To celebrate there’s all kind of new stuff happening this year, the biggest of which is the inclusion of paper (ephemera) dealers for the first time. I did really well with paper last year, so I should probably be cringing at the competition, but I’m not (too much) because it could very well bring in a bunch of new people which is crucial if book collecting is going to remain alive and well in this crazy Electronic Age. The other big change is the addition of two symposia, one each day of the fair, which should prove both fun and educational, especially for new collectors. And, boy, do we need those new collectors!

The first day will be a sort of Antiques Roadshow for books. My book guru, Jim Best, has done this previously, so he’s going to talk about the monetary value of “old books” and provide appraisals for books people bring to the fair. On the second day a roundtable of collectors and/or dealers representing various genres of collecting will field questions and also offer ideas for beginning and building a meaningful book collection.

I’m really jazzed, but I knew I needed to get on it quickly because there’s a lot of lead time before publication with a quarterly newsletter, so I carefully composed my copy, emailed it to the president of NOBS, got the okay, searched for the FABS website, and emailed the contact to ask whether they wanted it sent electronically or on paper and to whom it should be addressed. He wrote back in under ten minutes saying he needs it NOW, as he will be done with the issue at the end of the week. Whew! Right under the wire I flew. All it took was copy, paste, SEND, and we’re done!

So now I’m feeling pretty darn good about that, even though my bookseller hat feels downright itchy today. Sales, which had been just fine, given that it’s no longer the 90’s or the early 2000’s, fell off the map the last couple days. I got a fairly good order from a university library an hour ago, but otherwise I wouldn’t brag about today. I was thinking about why this would be happening in light of the fact that I just uploaded new stuff, when a weird though flitted across my mind like a sugar plum fairy in the Nutcracker. Maybe Christmas is HURTING me rather than helping me! Okay, so what does that mean? I thought about it some more and it actually makes a cockeyed bit of sense. There’s only so much money people have to spend on the holidays, so if real books aren’t high on Santa’s list, or the existing stock is not what’s wanted for gift giving, a seller like me with a large ratio of old stuff, but not enough old stuff (there’s NEVER enough old stuff), could be sunk.

I can hear Nancy already as she reads this. Once again I’m doing that thing that starts with a “p” that I NEVER remember, but means I’m sort of losing it.

So maybe I'd better just  put my PR hat back on and call the library. I need to nail down a date in March for a program about book collecting which, with any luck, will send a herd of Medinians stampeding to the book fair April 6th and 7th!
Posted by tess at 4:00 PM

That "P" word would be perseverate.
And we're going to replace it with the "I" word, which is Intention. And suddenly book sales will begin to flow like a spring in the desert.
Then you really will need that fishing hat!

Previous comment deleted because commentor cannot type all that well on a good day, but should never be allowed near a keyboard after 9 p.m.!!!!