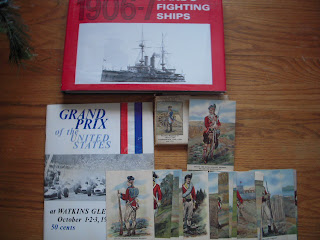 I’m sure you can guess why I’ve not been over here. We spent a great deal of time yesterday packing and loading the book collection we just acquired. If life were fair it would be done by now, but life isn’t always and so we are headed back to Akron at noon. Eric offered to let me bail on it, but I’d feel too guilty if I made him face the misery alone. I just hope it’s not as crazy as it was yesterday. You’d have to have been there to appreciate the breadth and depth of the horribleness, but perhaps this will give you an inkling. While we worked a contractor remodeled the bathroom and the book owner’s wife visited with her sister in same room with me while I packed. You know that old phrase “the elephant in the living room?” Well, that’s what I felt like. Eric didn’t fare much better. Not only did he haul sixteen heavy cartons of books down the stairs and out the back door, but he also ended up helping the contractor haul in the new bath fixtures!

I did manage to isolate what few things I wanted for online and the mall so at least that stuff's easily retrievable. I found one more volume of the set pictured at the top of the last post, so that was cool and also got some nice Formula One Watkins Glen United States Grand Prix racing programs from the 60’s, a miniature French needlework book with color plates, Jane’s Fighting Ships 1906-7; Jane’s Fighting Ships 1914; a scarce book on WWII fighter pilots and a box filled with unused linen postcards from the 40’s. There’s some other good stuff too, but I can’t remember what it is and by the time I got home I no longer cared.

On the bright side I took seven or eight books from this buy over to the mall the day we loaded our car with the eight boxes and already sold one, so that was encouraging. The mall performed wonderfully again this weekend, so by last night I was restored to my former cheerful self. The best sale was a leather-bound medical lexicon from the early 1800’s, but we also sold Civil War, England, books about antiques, natural history, vintage movie magazines from the ‘30’s, vintage travel and even early school books. Online sales finally picked up yesterday too which meant I was up this morning wrapping at four a.m.. The downside is that Christmas is at my house and I haven’t finished shopping, decorating, wrapping, or even thinking about food.

I suppose I should have done some of this Saturday, but I really wanted to research those English documents I showed you last time, so I whiled away a lot of time on that which proved to be most interesting. I also took time to examine the ones I have. There are sixteen in all and one actually dates back to the mid-1600’s! As I suspected, they are indeed handwritten on vellum and are land transfers, though they are called indentures which would make you think at first glance that they had something to do with involuntary servitude. The red disc at the bottom is sealing wax stamped with the “mark” of the seller and the blue ticket at the top is the revenue stamp. But here’s the part I love. See that hand-cut scalloped edge at the top? I thought it was an attempt to be decorative, but it was actually a safeguard. The attorney who drew up the document would make two copies (imagine the work of THAT!) and to insure that they were exact would put them together and cut the design free-hand. The client got one and he kept the other in the office. In order for them to be true copies that scalloped edge had to be identical. I also learned that I can get the documents to lie flat by putting them between two boards and exerting a little pressure. I probably won’t do most of them, but I think I might on the oldest one so I can take it to the book fair in April.

The one pictured below is not the oldest, but I chose it because it IS very early (1707) and smaller in size so easier to photograph. What’s interesting about it is that there is no actual date, so I had to read the first line, ‘’This indenture  the sixteenth day of August in the sixth year of the reign of our sovereign, Lady Anne, by the grace of God Queen of Great Britain, France and Ireland …” Queen Anne’s coronation was in 1702 so her sixth year was 1707 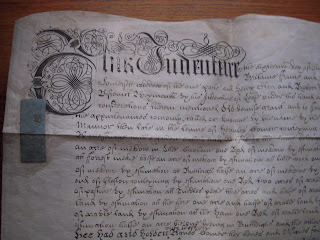 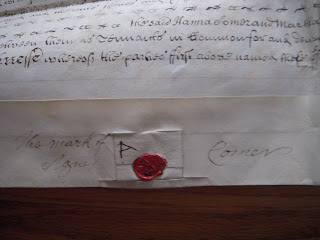 Anyway, all of that was great fun and it is truly awesome that a 300 year-old document has somehow landed on my living room floor. I would love to dally with it some more today, but I do have to upload some books. In less than three hours indenture will take on its likeliest meaning as we pack and haul  once more in Akron.

P.S. I must be getting dotty or something because I was halfway to Akron when it occurred that I called these inscriptions when I meant indentures. I have no clue what THAT was about, but I just changed it!
Posted by tess at 9:41 AM

Beware your back! Sounds like a treasure trove but so much work! A fascinating photo. I want to reach out and touch it!

Oh, that's for sure -- the work I meam. Stay tuned for the continuing saga! As for the document -- vellum is a unique subtance -- very sturdy, which is why these things survived as well as they did.