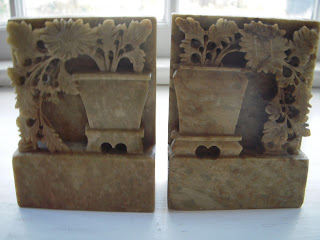 I saw a picture on Facebook yesterday of a little girl sitting under the Christmas tree in her fleecy “feetie” pajamas, her legs encompassing a mound of presents. That would be me today with gifts both tangible and intangible. I feel almost at a loss for words this morning , but I think maybe if I work at it here I can probably scrounge up a few. The trick is to isolate one of the many gifts of Christmas and zap it with a bright beam of light. So I will tell you just one story today, the one I mentioned the last time I wrote. It’s amazing to me that I used the words “trivial and silly” to describe it because it wound up being so huge I would never be able to find a box big enough to contain it.
It all began with the Chinese soapstone bookends. Remember those? My friend Nancy saw them here on the blog and told me a funny story about having collected a single chipped one when she was a kid during a door to door treasure hunt for merchandise to hold her first (and last) rummage sale. Of everything in the red wagon she used to collect the loot the chipped bookend was the only thing she remembered decades later. I told you that and about how she rediscovered the original not long ago in her sister’s house in Utah. But what I didn’t tell you is that the day I went to the mall and found them stolen was the day I went to get them to give to Nancy for Christmas. If my reaction to their loss seemed extreme that would be the reason why.

As soon as I wrote that they’d gone missing Nancy sent me an email saying that if by any chance the mall found them (I filled out a missing item report) to let her know because she wanted to run over and buy them for her brother-in-law for Christmas. Hours later I also got an email from her sister in Utah saying that if they reappeared SHE wanted to buy them for Nancy for Christmas! I told them both that I found it highly unlikely, but would let them know if a miracle occurred. Shortly thereafter a THIRD person wrote expressing a desire to buy them too, though this woman I didn’t know. I ran an internet search and found two sets in the exact color and design, but both were priced at $150. Mine were just a third of that.

“No wonder they were stolen,” I told Eric. “We’ll never see them again and there’s no way I can get another.”

A week later I was signing us in at the mall while Eric hauled the week’s books back to the booth. Normally he’d start shelving, but this time he came back to meet me. “There’s something I think you’ll like back there,” he said. “Come on!”

I couldn’t believe it. COULD. NOT. BELIEVE. IT. Both bookends with my ticket still attached sat on the tea cart as though they’d been there the whole time. There was also a single brown one in the exact same design with no ticket at all! I turned that one in at the front desk and discovered that mine had been hidden by someone who apparently wanted to get them, but didn't have the money right then. Wow -- talk about energy, these things were fairly buzzing!  Suddenly I felt desperate to get them out of the mall, so I sprinted back to the booth and snatched them up just as a guy came by, glanced at the box on the floor beside me and thought I was taking them out for display.

“Those for sale?” he asked.

Okay, so that might have been a little dramatic, but at this point I wouldn’t have given to them to the pope, the president, or the Dali Lama. Didn't I tell you in the last post that you couldn't make this stuff up?

Selfishly, I wanted it to be me. Nancy is – well, it would take more words than you want to read to say what Nancy is to me. But something kept telling me they weren’t mine to give. No matter how many times I reframed it, the truth was that the bookends represented a moment shared by Nancy and Kathy long before I ever entered the picture. So of course I ended up emailing Kathy and telling her they were hers. At first I had planned to engage Nancy’s daughter to hide them until Christmas morning, but her work schedule was so insane I could never nail her down and, if I did, it would just be adding another level of stress to it all  So I wrapped them, wrote “Love from Kathy” on the card and presented them to Nancy on Friday when we had breakfast, exchanged gifts, and did our Christmas grocery shopping. 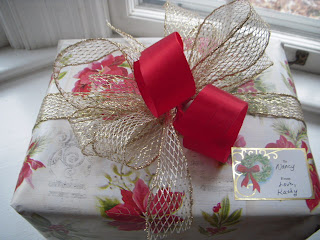 I don’t want this to turn maudlin, but here’s the thing. In every way that mattered the booksends were a gift from Kathy. Yet somehow they were a gift from me too. And a gift TO me. I can’t explain it, didn’t expect it, but here it sits today, under the tree with my mound of other presents,  right smack in the middle with my pajamed legs around them all.

Oh, and one more thing. I bought the bookends at an estate sale in Akron at the home of Robbie Stillman who, believe it or not, turned out to be a long-ago friend of Nancy’s. Random chance? 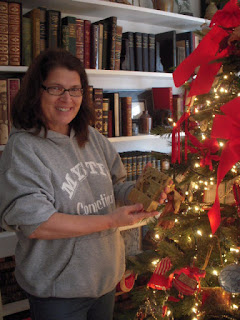 O. Henry's got nuthin' on you!
An amazing story told as only you can, Tessmeister!
Our whole friendship is a story
writ large. I look forward to many more chapters. We'll be the two old bats in the nursing home, singing "Help me, Rhonda!" while the aides roll their eyes.
Now let's get out there and walk off the Christmas cookies...

I can just see that -- you with your beautiful voice and ME the old frog croaking. But Help Me Rhonda it is. By then we'll NEED Rhonda! Okay, you're on. I didn't have one single cookie, but I'll walk anyway.

It was, and is, a great story -- one of those ones you talk about for years.

What a wonderful NEW memory for both of you.

Thanks, Hilda! Hope you had a good Christmas too.