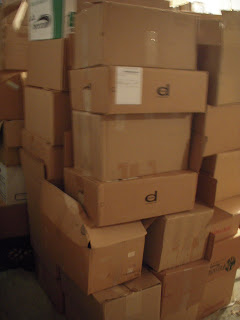 If anyone thinks bookselling is glamorous I would challenge them to join us for Day Two of the misery. Compared to yesterday Sunday was a leisurely stroll through the library of Trinity College, Dublin gazing at the illuminated manuscripts. Not only did we pack and haul sixty cartons of books, but we had actually done forty-five Sunday which I somehow had thought were only twenty. It’s not the manual labor that was the problem – I am really quite strong for a hundred pound weakling with metal in both wrists and have great stamina for stairs. For five hours yesterday I worked like a teamster and am none the worse for wear. My problem was with the highly charged atmosphere in which we labored.

The bath remodeler was there again, as was the sister (who turned out to be very nice). The poor remodeler was on the clock so it certainly wasn’t his fault that he had to block access to the back door most of the day. Why he didn’t have an assistant I don’t know, but he truly had little choice but to press Eric into service again. Even that was okay – Eric can do both demo and plumbing with the best of them in an emergency which is what it rather startlingly became. As with most remodeling projects, removal of fixtures revealed hidden problems which required further work and expense. The remodeler came into the room where I was packing and explained the difficulties to the homeowner. Having done our share of home improvement projects I thought it all sounded pretty par for the course. The homeowner, however, begged to differ. She leaped to her feet (no small feat either considering all the pill bottles lined up next to her) and flew into a rage that colored the air as blue as the Adriatic Sea with a string of creative expletives. It was fairly stunning.

Now imagine that scene in a room with the heat cranked up to at least 75 degrees on a fairly warm day and you will appreciate the perspiration expended by the poor remodeler. Even I, who am notoriously cold, would have bet any profit we make on this that I would very soon melt like candle wax. The remodeler tried again to explain the situation, but gave up abruptly and told her her options. After a second round of histrionics she finally agreed to let him buy the extra parts and finish the job, then promptly got on the phone and ordered enough greasy food to clog the arteries of an army battalion after which she marched out into the kitchen and informed him that if her dog ran out the back door he was DONE.

Just as on Sunday I had deliberately sequestered the books I wanted for online and the mall so they would be easily retrieved, but after that performance I distributed them willy-nilly through the row of open cartons, taped them up, and moved them on out. By the time the food came (the heat in the room and the smell of the grease was enough to knock you dead) I briefly thought maybe death wasn’t such a bad choice given the circumstances. But the grease seemed to revive the reluctant homeowner because after she ate she became inexplicably cheery and sang Eric’s praises to the roof. He was a saint. A saint! (Yes, he is, and his canonization will be held this afternoon at three). By then I didn’t care if she preferred a plague of locusts to us. All I could hear in my head was that old song by The Animals “We gotta get of this place, if it’s the last thing we ever do ….”

And so we did. Eventually. Get out.

And then we went home, collapsed on the couch, and ordered a semi-greasy vegetarian pizza for dinner.
Posted by tess at 11:44 AM

Looking for a book for a friend. Duke Ellington, the piano prince and his Orchestra. Are you Alibris also? I found it there.

That's a lot of boxes, Tess! Maybe take your time...where are they going?

It certainly is! But they're done now. Half of them are unloaded in the garage and the other half are still in the truck. We will sort in the garage and Eric will take most to the store leaving me with whatever I want for the mall and for online. The timing's not great with Christmas, but life happens ...