Me on the Balance Beam? 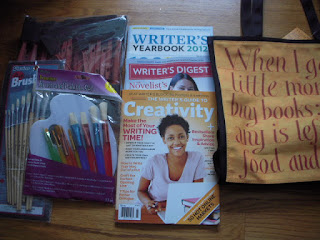 I finally have everything out from under the Christmas tree and in doing so couldn’t help but notice that my husband appeared to be sending me a message this Christmas. He knows from long experience that I am not dazzled by diamonds, perfume, clothes and fripperies (though there was one very memorable amethyst and diamond ring that was a big hit some years ago), preferring almost always the practical to the pretentious. Among the offerings this year I found three writing magazines published by Writer’s Digest, plus a year’s subscription to same, paint brushes (two kinds), and a new bag for carrying books home from sales.

Had it not been for the bag I would have thought these gifts were a gentle warning that maybe books won’t survive the Kindlization of the world and I may soon need a fall-back occupation. Even WITH the bag a nagging little worry nibbled at my edges even though every item delighted me. Finally I broke down last night and asked him point blank , “Are you trying to tell me I’m going to be out of work soon?”

“Whaaaaaaaaat?” He looked at me like I’d just suggested we summer on Mars. “Why would you say THAT?”

“Because Christmas sales weren’t as good as last year both online and at the mall and because a gazillion more people got e-readers for Christmas and it won’t be long before every book known to mankind can be bought on them.”

Yeah, that got his attention all right. For a second he mulled it over and then said, “Well, all that’s true, but I’m not ready to go there yet. I still think there’s a market for books and there will be at least until our generation’s gone.”

Like that’ll be a long time from now. But still, he had a point. “Okay, you’re probably right and I choose to believe it too. But I never have time for anything but books and now with things the way they are booksellers are going to have to work harder than ever to compete.”

As soon as that last part was out of my mouth I knew what was coming. And sure enough …

“It isn’t possible to work harder than you already do! You’re OBSESSED. And meanwhile all the other things you love – writing and art – fall to the wayside. I’m just suggesting that you need balance this year. You started a novel and it’s good. You need to finish it.”

Ah, the novel. Well, yes, I did start it. And I did (do) want to complete it. BUT. After flipping through the writing magazines it’s evident that in the ten years since I last wrote anything for publication an earthquake also rocked the publishing world. No longer does it work the way it used to. These days a writer apparently needs a platform or platforms. The only platforms I ever had was a cool pair of shoes back in the 70’s, so this is not looking too good. What this means is a writer needs to conduct a social media popularity contest before even THINKING about writing so much as a grocery list for publication. I show up over here more than I do on Facebook or Twitter which isn't as much as I'm supposed to and I know I don’t promote anything the way I should. Consequently, I doubt very much that my 41 blog followers, 60 twitter followers, 25 Facebook business followers and 46 or 47 (I forget which) Facebook personal followers will make me a hot commodity.

But that being said, I still think that perhaps Eric is on to something. The odds probably aren’t great for any of my three passions on their own long-term, but maybe together they’ll end up being a whole job. And I’ll end up being a more balanced person.

But you know what? There’s a noisy little part of me that STILL thinks that if I could get some decent books in here on a regular basis like I used to we wouldn’t be having this conversation!
Posted by tess at 11:00 AM