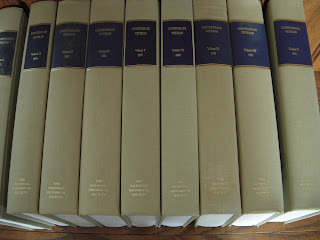 Online sales remain lackluster, BUT things are definitely looking up. Yesterday morning I got a tip from my antiques dealer friend Darwin about a book collection for sale. He only had a name and a phone number -- no details on what it was comprised of -- but Eric immediately recognized the name as a long-time customer whom he’d heard had died. So he made the call and, sure enough, that’s exactly whose books they were. The family didn’t know we sell books, though recognized the name of the store immediately and said we could come over as soon as we wanted. So just after lunch we hopped in the car and an hour and a half later owned a crowded roomful of books, magazines, and paper a la the infamous Elmer from whose estate we bought 35,000 items some years ago. Oddly enough, this guy and Elmer were buying at the exact same time and at the exact same sales and both not only chose the same kinds of items, but in some cases, the exact SAME items! Also, both subscribed to the theory that if you like something buy it whether it’s good, bad, or downright ugly. Which means of course that we have a major job on our hands.

When we left home we had no idea that we would be making an offer on the lot, so we took the PT Cruiser which couldn’t even begin to handle it. All we could do is load up Petey with eight full banker’s boxes with the understanding that we would come back for the rest with the store truck Sunday morning. It turned out to be a win/win for both parties, as they wanted them gone and we have the capacity to handle it all neatly and efficiently because the store is huge -- 10,000 square feet including a warehouse to absorb the overage should there be any. I actually like buying a big messy, confused bunch of stuff because the price per item goes down exponentially due to the fact that it’s impossible to examine it all and there’s enormous work involved. In fact, when I packed the boxes I noticed that many free dust bunnies came with the bargain! Clearly, the books hadn’t been touched in years. Some were shelved and some piled on furniture, but most were leaning starboard on the floor or packed chock-a-block in the two closets. Every last one will require cleaning and in some cases small doable repairs and all the dustjacketed ones will need mylar. So if you need me in the next few weeks I’ll be down the basement!

What will happen of course is that the collection will split three ways – store, antiques mall, and online. There’s also the outside chance that MAYBE it could mean being able to grab the empty booth next to ours. I’m afraid to be too hasty because of course we haven’t even seen all of this stuff and won’t until it’s here. But I have to tell you I’m about ready to duct tape my phone dialing finger to the desk to reduce temptation! .I’ve already been through all the stuff we brought home yesterday (worked on it until midnight last night) and Eric got the preponderance. The mall got the next most and I kept about ten things for online, though I’m in no hurry to get them there. My favorite items include the first nine consecutive bound volumes of The Confederate Veteran magazine – handsomely done facsimiles and the cleanest of everything we brought home; a sleeper book I had a hunch would be good and IS; and a stack of amazing British documents handwritten on vellum and dated from the late 1700’s to the early 1800’s. They're enormous and sport a decorative handcut top and are marked with sealing wax. I have do some studying up on those, but the one pictured below seems to be a land transfer or its equivalent. I apologize for not being able to photograph the entire thing, but it's huge and won't stay open. I also apologize for my knee, but I couldn't position said knee out of the picture and still get the portion with the sealing wax. 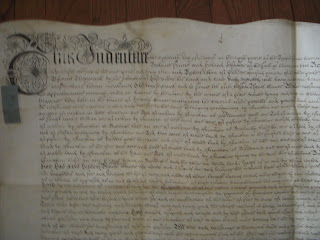 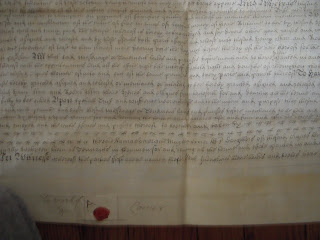 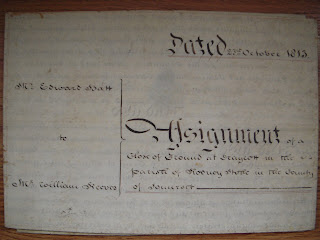 As for the the above mentioned book,  I'm going to save it for later because it may end up being a blog in itself due to the fact that not only will it make an interesting post, but is absolutely the most innocuous little tome you ever laid eyes on yet provides us all with a lesson much like the one I expensively learned with Bird Sanctuaries As Golf Clubs. Remember that one? Yeah. Not good. But this time will be different. Before I do a thing I am going to put some serious time into it, first of all to verify the astounding prices online. I'm a bit optimistic though, as  I already know that one of NYC’s most prestigious antiquarian dealers treats his copy like the Crown Jewels. His is better because it’s an association copy in a clamshell box, but his is also many times more expensive than what the other ABAA sellers are asking for their copies which are exactly like mine.

So I guess it looks like my friend Nancy was right. I need to stop thinking doom and gloom, and concentrate on intention. However, at this point the only things that are flowing like her “spring in the desert” are the dollars surging out the door and the unknown books rolling in. Sales? So far, not so much. But call me grateful anyway. It’s been quite a 24 hours.
Posted by tess at 11:41 AM

Amazing! I see what you mean...busy with this collection! I love the photos. Elmer Fan

Yes, it's been interesting. We're off tomorrow at nine to pick up the rest. After that the games begin!

OK, so now I understand why there was no Sunday morning walk for sundaymornancy!
You may need to install one of those old-time coal chutes to be able to process all those books.
Excellent news and I look forward to hearing about this mystery book!

Oh, you just now saw this, huh? I thought you'd see it yesterday and know where I was. Sorry about that! I am off there again today, believe it or not. I hope we can finish this time. Actually most of the books are going to the store, so no need for a coal chute!