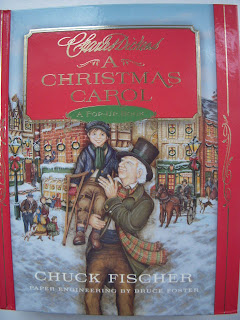 I thought I’d be over here bright and early this morning, but I started a little project at five a.m. and now at twenty past noon I finally finished it. As I mentioned, we went Christmas shopping yesterday, a task which ended up being great fun with lunch at Olive Garden to break it up. I did have to reluctantly buy from a few large stores inspite of myself, but I made sure to choose ones which haven’t done any evil things (that I know of) lately. The really great part was that everywhere we went perfect things awaited us, so no stress. I hadn’t planned on being creative this Christmas, but two ideas popped into my head while we were out, both of which require time. The one won’t be too bad, but the other was the project I started this morning and which is pictured below.

A couple years ago Eric got me a huge array of gel pens in every color you can imagine and some you can’t. Our oldest daughter flipped over them, but we never spotted such a packaged array during the holidays again. I thought about it while we were out yesterday and decided to buy gel pens individually and then get an old-fashioned pencil box to store them. Well, one thing led to another and pretty soon we’re at Pat Catan’s (fondly known as Pakistan) looking for a container for me to decorate. The box we chose – plain brown heavy cardboard -- is so perfect that all the pens fit inside as though it were made for them. I couldn’t wait to get started decorating, so I flew out of bed at four-thirty this morning, made a pot of coffee, ate a cranberry bagel, and was down the basement tearing paper in fifteen minutes flat. But lest you think it’s all fun and games over here let me mention that rapture extracts a price. As soon as I finish talking to you I’ll be scraping bits of stuck paper off my workbench and gathering up the piles and piles of unused scraps on the floor. But until then here’s what it took to do it -- two catalogs, Acacia and Signals, gold paint, vintage paper, a canceled one-cent stamp, part of an old photograph, part of a new photograph and card stock that I layered to make the button on top. For now at least I like it, but I’ll be wrapping it ASAP because I never tend to like anything I make for more than a day or two which means I’m back fussing with it again! 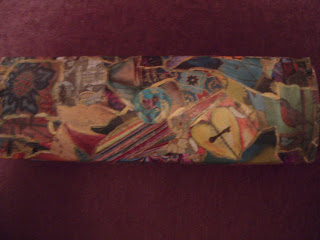 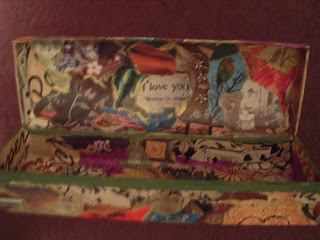 In addition to shopping we hit the antiques mall yesterday to stock up for the weekend only to find that we had to struggle to shelve it all because we’re running out of space. Eric was saying on the way there that if we wanted to get another booth we could just about do it. But wouldn’t you know – both of the empties in our aisle have filled, including the one next to ours. There is, however, a double across the aisle and down a couple booths that must have vacated this week. If we had a lot more stock I’d be up for the work of moving, but as it is now I shudder to think of it after all we’ve done this week with the Akron books. I don’t even want to think about all those boxes from there waiting to be sorted. We worked on them every day this week and we’ve even sold some books at the store, online, and at the mall, but of course it’s nothing compared to what’s left.

Tomorrow we have to go to a birthday party for Eric’s great-aunt Ruth who lives in a nursing home and is 92. All of her life she worked as an adoption social worker in Akron and was a whirling dervish of activity – she belonged to a church group that baked bread, volunteered at the children’s theater, drove for Meals on Wheels, traveled the world, took painting lessons, took our girls to Sea World and for overnights, and kept track of a gazillion friends. But these days her world has shrunk to the size of a small room and her short term memory is nearly gone. So what to buy for her birthday? Last year I got her a box full of warm fuzzy, fun socks, including a to-die for black pair with leopard faux fur around the tops. I told her I HAD to get those if she wanted to be the cutest girl in the place, which made her laugh.

But this year she’s slowed way down and it wasn’t so easy to find something for her. She used to be a voracious reader and even last year was reading the Jan Karon novels, though of course she’d forget the plots immediately and read them all over again. But no more. As always,when in doubt, I turned to books and bought her a fabulous pop-up of A Christmas Carol that has small books inide that are mechanical too. I hope she loves it because she’s my hand-down favorite of Eric’s relatives. Every Christmas Eve when the kids were little she stayed with us so she could be here when Santa came in the morning. She even went to Chautauqua for a week with us one summer. Personally I think old age is a design flaw. I don't think we need to live forever, but I think it's totally unfair that our Aunt Ruth,who is the BEST, has to wither away in a nursing home. 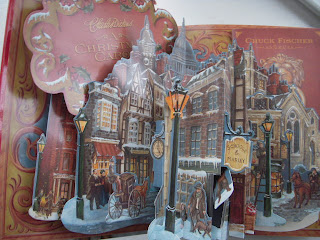 Anyway, I now have an enormous pile of gifts to wrap, so on that note, I will talk to you on Monday. By then I should have lots of time. Online sales fell short of dazzling this year, though Thursday I hit the jackpot with two days worth of orders compressed in one day, including one three-figure book. But yesterday was down to two orders and today to just one so far. At this rate, by Monday I should be the Queen of Leisure.

P.S. It's okay that I showed you the pen box. Moira doesn't read my blog. She doesn't need to -- she hears all my stories anyway.
Posted by tess at 2:57 PM

Thanks!I went back and did some gold veining in these pictures. I had different ones up earlier.

You're back! Hope it was a fun trip. Let's do lunch after Christmas.

The box for Moira is stunning!You better hope she doesn't read your blog, although your work tends to be even more spectacular in person, so she will be wowed no matter what.
The pop-up book is such a sweet gift for Aunt Ruth. Her life is a testament to all the unsung goodness on earth.

That's so sweet of you to say that about Aunt Ruth, but it's the truth. She is the best person. I took to her the first day I met her 41 years ago and never wavered.

Thanks for the kind words on the box too. I love doing it so much!

What a beautiful box you decorated. You did all that? Amazing. I am so uncrafty. The only I do worse is try to play the piano. Delightful.

Get wrapping! It's less than a week away now! gin

Thanks! I did do it, but every time I'm surprised I did because I only do it a few times a year.

Not to worry -- I can't play the piano either!!