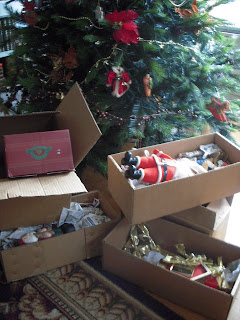 I can’t believe I told you I’d be here Monday when I knew full well I was supposed to be with Nancy at the community center for my annual volunteer day. We’ve been doing this together for a lot of years and it’s one of the special days of Christmas for us both. I know I mentioned it last year, but in case you forgot or never read back that far, it’s a very cool program which allows people who need help for
Christmas to come “shop” for their kids. Shop of course means in this instance to peruse the array of brand new toys, clothes, books and puzzles and select items their kids would like at no charge. It used to be a two day event, but now there are pre-shopping days, so the Big Event is womaned only by me and Nancy which means it rocks and rolls big-time because we have a blast doing it!

The shoppers are great fun and sometimes there are cool surprises when drop-in donors play Santa just when the pickings start getting slim. Last year it happened twice and this year just once, but WOW did it happen! A man showed up mid-afternoon bearing skateboards, helmets, watches. pajamas, games, jewelry sets, toddler toys, DVDS and nail polish. The last item proved to be very funny because the second we showed up in the morning we’d spotted this stupid brown leather box that’s been rejected at least four years running. It’s one of those items that have no purpose for being. We moved it to this table and that table and still it was a dog. So when the nail polish arrived we quickly put all 12 bottles inside and –voila! -- they were a perfect fit. And guess what? Not even half an hour passed before the stupid brown box was history. Now, THAT’S what you call retailing! :-)

Believe it or not, I had not one, but TWO, great orders yesterday, both of which were from the new books we bought in Akron. One was actually a Christmas present headed priority mail to NYC, so I ended up down the basement early this morning after all. After I got the mail out I got some books ready to go the mall too just n case I can find time to get there. All I did was replace what sold because I don’t think I have enough room to do anything else. We probably won’t get there anyway though because the store finally kicked into Christmas gear yesterday and pinned Eric to the wall. I talked to him at lunch and he’s crazy-busy today too. Yayyyyyyy!

Well, Aunt Ruth’s pop-up book turned out to be the hit of the party Sunday. Her pleasure in it exceeded my wildest imaginings. She knew it was a birthday party, but asked me whose birthday it was. I told her it was hers and she asked how old she was. When she heard 92 she said, “Me? That’s me that’s 92? Oh, dear. That can’t be right.” Later on she sang Happy Birthday and stopped abruptly at the “dear -------" part and said, “I don’t think I know whose birthday it is.” So we had to tell her again and again she was blown away by her age. But she opened her presents with a glint of glee I didn’t expect and seemed entranced by the elaborate pop-ups. She even read some of the text  out loud. I bet you there’s not a Nook or a Kindle on the face of the earth that could have a elicited a response like THAT!

And speaking of Nooks, Kindles, and other such killjoys, a volunteer at the community center yesterday brought us some more books to restock the shelves around five o’clock. I was in the book room neatening up when I overheard her pointing out good titles to the moms. After thanking her for bringing us more goodies I commented on how knowledgeable she was about children’s books.

“Oh, I love books!” she exclaimed. “All my life I’ve loved them and been a big reader. You’ll never see ME getting one of those e-readers. NEVER! It’s not the same experience.”

I'm not sure, but I think maybe that was the exact moment when a host of seraphim and cherubim appeared in a golden light singing their little angel hearts out!

P.S. The photo above is my unfinished Christmas tree which I am off at this moment to decorate. Sshhhhh – don’t even TALK about the unwrapped gifts. I already know they’re still in their bags heaped by the back door where I dropped them Friday. I’ll do them too. but first things first ........ Meanwhile here's a funny picture I just found -- me at 29 with four year-old crying Moira who didn't love Santa even a little bit! Check out the hair color though. I'd completely forgotten my dark brown phase. I think I've had every brown and red shade L'Oreal ever made, but mostly I've stuck to the reds. My nautral color -- who knows?! 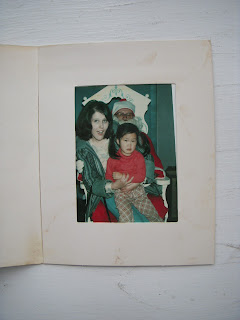 That photo of Moira is so sweet. No wonder she was freaked out. The guy in the beard doesn't even remotely look like Santa -- more like a CIA operative in a red suit!

I KNOW! I was thinking to myself when I found it that the candidate pool must have been mighty slim for Santa. I think it was at the Summit Mall too!

Merry Christmas to you in Ohio. From a Fellow Lover of Books in Kansas.

Back at you, Hilda! It's raining here -- hope it's nicer in Kansas!