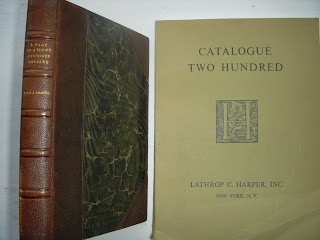 In my last post I mentioned buying a Lathrop Harper catalog and since discovered that I had actually bought two. I thought for sure I had and it was the 200th one I wanted to mention, but I couldn’t find it on Saturday. Turns out it was still in the bottom of the bag that held all the estate sale goodies. So now that I have a total of three Lathrop Harper items I have good reason to talk about him. I love those old booksellers of the past and Lathrop’s my favorite because he used to sell books to Belle Da Costa Greene  for the Morgan Library. You may remember that I wrote a post about her in September (The Belle of the Books). I’m crazy about Belle, so if Belle liked this guy I liked him too.

Lathrop Colgate Harper first came on my radar screen through the purchase of an antiquarian book entitled  A Face in a Crowd and Other Stories written by Ella Adelaide Harper, who also wrote under the pseudonym, Ruella Lennox. I wish I could say I bought this book for its literary merit, but the truth is I acquired it for its own exquisite beauty. It’s finely bound in half leather with marbleized boards and matching marbled endpapers in green and gold. The spine boasts raised bands and crisp gilt lettering and the top edge of the pages is also gilded. I'm here to tell you -- hold this small book in your hands and John Denver sings the chorus of Annie’s Song EVERY time. ("You fill up my senses ... ") I didn’t realize, however, until I got it home that tipped-in behind the endpapers is a typed note on Lathrop’s business stationery.

It reads: “For Deisher, A book of short stories written by Mr. Harper's sister. Published in Waverley and other magazines of the time. After her death, collected and privately printed by her family. Written in the leisurely style of the day, but shows something of the author's lovely character. And from her pictures she must have been very beautiful. Unfortunately, she died quite young. As you are interested in privately printed books, I thought you might care for this one from the Harper family." Beneath is a very, very tiny back-sloping signature, the last name of which is Harper. The other two names cannot be read, but do not appear to be Lathrop's. 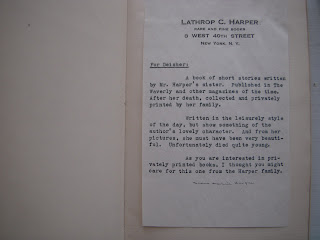 Immediately I launched a search and rescue party on the internet to find this book dealer with the literary sister and, sure enough, I did. I also got some help from The Dictionary of Antiquarian Booksellers by Donald C. Dickinson where I  discovered that Harper entered the book trade in  1881 with his brother who’d established the business earlier. I don’t know a thing about this brother and don’t much care because my crush is solely on Lathrop (I’m a one bookseller woman I guess). Anyway, Lathrop is bookseller enough for anybody, having been an expert on incunabula, Americana, and medieval manuscripts. He also helped form what is today the core of the William L. Clements Library at the University of Michigan.

Lathrop and his wife lived in the upscale Gramercy Park neighborhood of New York City and took regular jaunts to Europe to buy books and antiques. In addition to his scholarship and business acumen, the other thing that turned my head  is the fact that he wasn’t freaked out that his wife used her maiden name for business. For thirty years she penned a syndicated column entitled The Married Life of Helen and Warren, a fictitious account of her life with Lathrop.Any guy who could handle all that back in the early 20th century deserves this post for that alone. Wouldn’t it be fun to have all those columns? I’d settle for just one.

Lathrop died in 1950 in his office with his hand on the phone. That, too, is fabulous, as he was 83 years old and still selling fine and rare books and producing the gorgeous catalogs for which his business was famous. From 1928-1930 he published a record five just of  incunabula.  For thirty years his chief cataloguer was E Miriam Lore whose nephew, Douglas G. Parsonage, eventually entered the business to help with the cataloguing too. Two years after Lathrop’s death, however, a German businessman and collector named Bernardo Mendel bought the stock and let Parsonage and Otto Ranschburg run the business. When Mendel died in 1967 Indiana University bought much of the stock and the business was dissolved. But two years later Parsonage and Ranschburg bought the rights to the Lathrop Harper name and with the remaining stock renewed the business. It’s their catalogs that I bought last Friday. 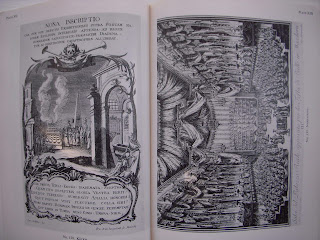 I love being a bookseller, but how I wish I could have been one in another time. Probably not Lathrop’s, as bookselling was a male dominated profession then. But I fervently wish I could have done this at a time when bookselling still required passion and scholarship. I have plenty of the first and have happily spent the last 13 years reading, studying, and learning. Even so, all  I know about books and bookselling would fit inside a thimble with room left over.

The amount of information a bookseller could strive to know is so vast I doubt a lifetime is enough to master it. But what a trip it is to try!
Posted by tess at 4:24 PM

Email ThisBlogThis!Share to TwitterShare to FacebookShare to Pinterest
Labels: Lathrop C. Harper. Antiquarian booksellers of the past.

I have a catalogue of incunabula second series Part l Poetry, Romance and Drama Lathrop C. Harper Is this worth anything? It is dated Nov 1944 Thanks my email address is emersonrandee@yahoo.com

Thanks for the note. I andswered via your email address. Hope it helps. Your cataloigue was printed before Lathrop died, but he was quite old then. Still, that's better than mine.