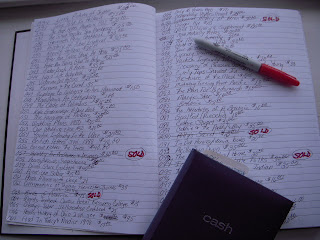 Dare I say it out loud? Will the book gods hear and deem me too self-satisfied to be worthy of future good books? I don’t know. It’s definitely a risk, but here goes. I am cautiously optimistic about the antiques mall. There. I’ve said it. And so far nothing bad has befallen me, so I guess I’ll elaborate.
As I mentioned in my last post, I went to the mall Saturday night with a couple more boxes of books. We pulled into the parking lot and immediately gazed around in disbelief. The place looked like a used car lot! They stay open until eight on Saturdays and it was only five-thirty, but still… they actually had more cars than K-Mart! Inside I checked in, logged the time, and made myself a name sticker with my booth number on it. The second I adhered it to my sweater a guy came over to tell me that he’d  just bought a Bible from me. I chatted with him for awhile  and then  went back to the booth where I beheld – could it really be? --a second customer! A man held up a book about paperweights and said, “Nice book! I’m going to buy this from you” then promptly bore it away.
I unpacked my new stock, marveling at how fun all this customer contact was, when suddenly a realization cut the thrill off at the pass.  At the antiques mall the dealer does NOT want to be in the booth a second longer than necessary. For some reason the sight of you repels customers faster than a live tarantula. I also noticed that all the fixing, decorating and neatening a fussy shop owner does lasts maybe a nanosecond, but in the end  that’s actually a GOOD thing because it means that in your absence the wind blew in some readers. The books that had been standing lay like corpses, gaps from sold books caused surrounding  books to lean in an attitude of exhaustion  and the ephemera looked like it had been poured out onto the table from a dump truck. I set things to rights, grabbed my empty boxes, and took off in hopes of finding someone to help with the password problem so I could check my sales. But the checkout line snaked all the way across the long checkout/wrapping counter, so I didn’t bother.
The next day, Sunday, my friend Nancy and I returned shortly after the mall opened with yet another box of books and the world‘s thickest dictionary which I featured in a post this past summer. I got the password problem fixed in two seconds and – voila! – my sales appeared on the screen. I tried very hard to be cool about it and, in fact, put in a performance worthy of an Oscar I think,  considering that  I felt like I’d swallowed a Mexican jumping bean. Not only had I made enough to pay the pro-rated rent for November, but I almost made enough to cover December too. And – yes, yes, YES! – the 1937 Birds of America sold while we went to Target in the rain last Monday to buy the smaller table. And it gets even better. Last night I checked sales again and I made enough to pay all of December’s rent with a small profit already
Okay, now I’m getting nervous. I’m acting entirely too excited here which will not do because I truly need to stay under the book gods’ radar. So let’s switch topics to what kind of books actually sold. This is very interesting because only one area that I predicted to do well actually performed as expected. Just as I thought, the hottest ticket was local history, hands down. Most of my sales came from that section, but I did sell a couple childrens' books, the Bible (very nice, unused, vintage, Catholic), the paperweight book, a book on heraldry, and two expensive 18th century fashion magazines -- The Delineator and the very rare Peterson’s Ladies Magazine. My number of items in stock hovers  at only around 400, plus the pile of ephemera of which there must be at least fifty pieces on the table. I had expected the latter to be the cash cow, but not so. Other than the two fashion magazines it’s all still intact.
So what does it mean? I don’t know , but I do know that it’s far too soon to entertain thoughts of shutting down some of my internet venues and getting a bigger booth. Yes, I actually did briefly think those things, but I know better than to take them too seriously. Right now it’s enough to be pleased, less scared (but still some scared), and relieved – not to mention grateful.
I yearned for a good omen and  I got  one after all. Make that two -- the Audubon book and the  lucky dime Eric found in the parking lot in the rain.
Posted by tess at 1:46 PM

Thank you! I AM pretty thrilled over it all. But I realized that most of the sales will be on the weekend because they close at six very night except Saturday! :-(

And don't forget the omen of the $2 bill I found in an old book...that was meant for you, too.
Great work. I don't know how you can let some of those books go, like the bird book of 1937. Gin

There is another book missing from your booth. I bought it! You'll have to guess which one. The booth looks better in life than pictured.

Oh, cool -- I didn't realize the money in the book was my omen too! Yay! You can never have too many good omens. Thank you.

Cheryl, I was over there in the late afternoon -- hmmm, now I'm puzzled. But I should know soon!:-)

Everybody, I didn't write today because I had a horrible computer problem yesterday that only today got fixed and then I was gone to an auction all day. Full news tomorrow -- promise!