The Part About Life 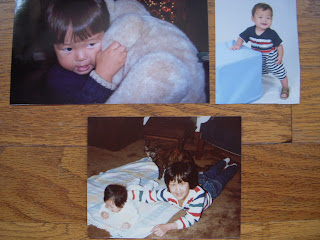 Believe it or not, we’re going to hit the road again today, but not for book buying. Our new little grandson will be formally adopted in court tomorrow morning in Michigan. Of course the timing could be better, but it’s been my experience that neither babies, nor government entities, care all that much about either bookselling or antiques malls. I’ve also noticed that the only deadlines that grab their attention are their own. But that’s okay because we’re thrilled to perform this ritual for the FOURTH time.


The first was in 1975 when our eldest daughter came to us from South Korea at six months old; the second in ‘84 when our youngest flew in from South Korea at four and a half months; and the third in 2003 when our oldest grandson, brother to this little one, jetted in from South Korea at five months. The shiny new one arrived in April at ten months (that’s him standing alone), an old guy by previous standards, but actually the youngest to have his day in court, as new regulations have axed the one year wait.

Eric always jokes about how we’ve created a mini Korean dynasty, which I guess we have. Sometimes when the whole family sits around our dining room table I can only marvel at the way life pulls surprises out of its hat. Not too many Korean adoptees adopt from Korea, but it’s certainly not unheard of. What’s unique about this situation is that on the night we waited at the airport for her sister’s plane to land back in April of ‘84 my oldest, who was nine at the time, said, “Mom, the next time we meet a plane from Korea I’M going to be the mother.” Years later she told her American husband before they married that adoption ranked high on her agenda. He agreed and the rest is recent history.

So what does all this have to do with bookselling? Not a darn thing. I just thought I’d tell you because this blog is supposed to be about life too and I very rarely even touch on it, which when you think about it, could qualify as a misalignment of priorities. It’s truly not though because these four people loom large in both mind and heart and two of them, in fact, are forces of nature who couldn’t be ignored if I tried! They know who they are – well, at least one of them does.

So, we’re off to Michigan in high spirits where tonight we’ll have the little guy all to ourselves while Mom and Dad go to a parent/teacher conference with the older one. Then tomorrow we’ll fill the courtroom with all four adoptees present. Afterwards we’ll celebrate over lunch at our favorite restaurant, the Mongolian Barbecue, and then hit the road for Ohio.

Okay, now it’s confession time. I almost set a record for writing a post which has absolutely no books involved, and now at the final moment I’m about to blow it. We’re going to a book sale in Ohio on the way home.
Posted by tess at 12:51 PM

Congratulations and have a good trip. My son and his Swedish wife are coming down here from Michigan (Farmington Hills) next week for Thanksgiving. No children involved there BUT my eldest and his Filipino wife are expecting their 2nd in April. We are a very international group.

Well, I would say so -- International R Us! We're back and it was great. The judge even asked Tyler if he wanted to the baby's forever big brother and Tyer said he did. When it was over the judge clapped and so everyone else did too including baby. And then we went to lunch to celebrate.

As the grandmother of two beautiful Kazakstan adopted children I know your joy...at least 1/2 of it. Blessings for you all. About the books on the blog, even booksellers are allowed to live life in a whole other way sometimes! Happy to hear you about your family.

I love your message to Cheryl...I am clapping too!!

This is so cool, Caregiver! You have two Russian grandchildren to add to my gang and Cheryl's two daughters-in-law. Amazing -- all this from such a relatively small group.