Sailing On A Sea of Paper 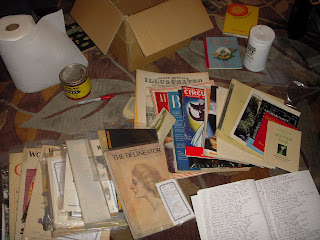 The spirit was willing yesterday, but the ticking time clock was not and so no blog post materialized. We got back from Michigan Thursday night with no book sale on the way home either due to the fact that we got caught up in the frivolity of the adoption celebration and didn’t cut and run in time. It was definitely the right choice, but all night every night since I have dreamt of endless antiques malls – booth upon booth, stacks of tags waiting to be handwritten, empty shelves … I think you can discern my state of mind. I’m so stressed that I actually didn’t even ship orders today. Got up at five, made coffee, toasted the daily bagel and literally hit the ground. My family room floor resembles a sea of paper and I am on my knees in the middle of it bagging and tagging. By mid-afternoon I’ll also be sagging like the skin of the Saggy Baggy Elephant. I love ephemera, but THIS is downright oceanic.

The antiques mall called while we were gone to say that we had booth access yesterday – ha-ha. I am about as ready for booth set-up as I am for Christmas and we won’t even talk about THAT. Besides, Eric has a serious weekend-long engraving class at the store which will keep him chained to it through Sunday. The plan is to set-up on Monday with whatever we have processed and make daily trips Tuesday and Wednesday with additional stuff in order to be ready for Black Friday. What panics me is how little I have done due to the need to log each item, price it, and number it inside and THEN create a tag with the same information. Eric designed and printed a bunch of tags at the store, so that helps, but the process still reminds me of filling out the long census form. Endless boredom!

It could be argued that I shouldn’t be writing this blog, but I also think of you guys endlessly and wanted to keep you apprised of the process in case you’re thinking of making the same move. I got a phone call last night from my bookseller friend Carol who runs one of the two best FOL book sales around here and who also stocks THREE antiques malls. She wanted to pass on some info on how to use Craig’s List to draw traffic to my booth. I’m giving it a try, but the malls she is at are not as rarified as mine (which is why she’s not there) and so pretty much anything goes. Once she actually posted an ad saying she had 700 woodworking magazines at a dollar apiece and ended up selling half of them! I, however, must labor over individual, pricier, older items, which means I may not be a contender for the Craig’s List popularity contest. But I did get to ask her a question I’ve been pondering.

“So -- how many items did you have at the beginning when you opened at the first mall?” I asked innocently.

“Oh, not too many,” she assured me. “Only three thousand or so.”

Okay then. Moving right along ...

So far I’ve logged about 125 books and have several hundred more in line to do , as well as several book sets. As you know, I’ve always been smitten with sets, but right now I’m even wilder about them. Sets not only command a higher dollar value, but they also emit a sense of abundance in what is actually a sterile desert -- or so I like to tell myself anyway.

Whoa! Did you hear that roaring just now? That would be the sea of paper downstairs trying to get my attention. Waves crash, gale force winds blow, and thunder booms like the voice of the Norse god Thor. Much as I would love to talk some more, I think I'd better steer the ship to port. It's  listing badly.
Posted by tess at 9:40 AM

Keep marking! Slow but quality is the way...don't you think?
Took Elmer a loooong time to collect his books. You will be a success.
An Elmer Follower

I sincerely hope so. I was at the mall for most of the day setting up only to find I had not brought enough. So I am still working at almost 11 p.m. -- started at five. Will try to blog tomorrow afternoon. Thanks for the vote of confidence!