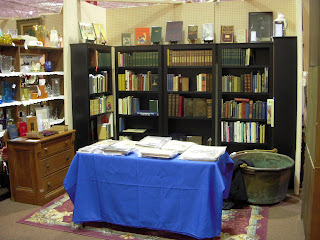 I think sometimes we're better off not knowing what we're getting into until we're into it. Had anyone told me I would be logging fifteen hours a day getting ready to launch the mall booth I might have crawled under the bed and hidden from myself. And yet had I not impulsively signed the contract and pushed myself to deliver I would be stockpiling books and fussing over details (I did enough of the latter as it is) until I was so old I’d be hobbling into the mall one book at a time.
Which is not to say this project was a Picnic in the Park With George. Monday morning, set-up day, we woke to howling winds. By the time Eric and I loaded the store cube van with the five new bookcases and what few books and ephemera I had been able to process, thunder crashed like an omen from the Inferno. As we pulled into the mall parking lot the dark sky opened and rain, like a thousand lamentations, poured over my previously high spirits. Suddenly I  knew with absolute certainty that I wasn’t prepared, didn’t have enough books ready, shouldn’t have done it, and most definitely shouldn’t  have been encouraged to do it by the guy sitting next to me.
For awhile we sat in the truck until we could make a dash for the door, me staring morosely into the gloom, Eric telling me that a mall store is a work in progress. It takes time. It takes work. It takes a little faith. Did I think all those crowded booths got that way immediately?
Actually, yes, I did. But I kept it to myself and let him talk. When the rain lessened he opened the driver’s side door, hopped out with great enthusiasm, and immediately picked up something up off the concrete.
“Hey, look what I just  found! ” He held it up for me to see. “A lucky dime. How about that?”
This from the man who not two minutes before when I said the weather was a bad omen told me there was no such thing as omens.
Inside, the mall seemed vast and alien. I couldn’t find the booth without help and when I  did it loomed empty, ugly, and too small. An hour later it perked up and grew a couple feet, only to shrink again to the size of a shoebox when we opened the six foot table that was supposed to hold the two boxes of bagged ephemera, plus a row of decorative books at the back. The  table was a barrier so effective it beat sawhorses at a construction site hands-down. If you don’t want anyone getting close to your books I highly recommend you get one. Maybe they even have eight footers.
Anyway, we had no choice but to trudge out to Target in the rain and buy a smaller one which fit better, but would barely hold even some of the ephemera, much less  the books with the eye-catching covers. As it turned out, this was actually a GOOD thing because I was right about the number of books in general. I didn’t have close to enough. And even now after processing three banker’s boxes more last night (and pulling a muscle in my knee), I still don’t have enough. I know this because we were back over there again today. So now I vacillate over what to do. Do I decommission more internet stock, or just let it go as is? I suppose could take my high end stuff over because I don’t have it most of it online, but I’m too afraid of shoplifting and, besides, was holding it back for the antiquarian show in April.  The thing is, a book vanished into thin air while we were at Target. Maybe somebody actually bought it, though that would be so amazing I might have to turn into an optimist.
All I know is its %^&*$$% ticket (that took forever to make and is the reason why I have so little stock)  was lying on the carpet where the book had been and the book (a 1937 Audubon’s Birds of America with the soft paper and brilliant colors) was gone with not so much as a feather left behind. I won’t know until tomorrow when I’m in  the mall's computer system and can check my sales on the internet whether it found a happy home, or was kidnapped.

But I do know one thing. It's an omen.

In answer to the email I just got, the glass objects on the left belong to the booth next door, but the little chest of drawers is ours, as are the books on it. And the hulking copper kettle the size of Kentucky is ours too. Eric bought it as an estate sale. What can I tell you? The guy loves rusty stuff.

Tess, it looks great. Keep that dime. I may mean something. I found a fresh crisp $2 bill in a book I picked up at the trading shelf upstairs that had been discarded. I think it is an omen too. I love them, and sent them to my 2 year old grandchildren when they turned 2 for their piggy banks. Mine is going in my mother's little cedar chest. A new treasure. All of your hard work is going to pay off and make for some great sharing. Enjoy today.

Thank you, as always, for the kind words, Caregiver. I am always a little crazy when I launch something new. I feel better today and very thankful.Wishing you the same.

It looks terrific , especially for the short time you've had. Remember me if you need a hand.