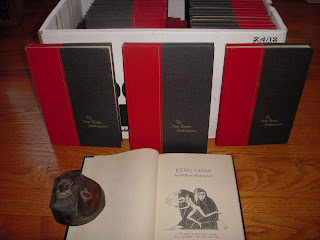 I’m a day behind in posting and I do apologize. I wish I had some amazing reason why, but I don’t. The truth is I was too morose to hang around with anybody, so I hid out in my office all day yesterday and listed books. We were at another sale Thursday night where I got a fair number of fairly good things – actually surprising, as the last time I went to this sale in the spring I bought nothing. This used to be a wonderful sale which we anticipated with pleasure, but these days they allow the volunteers and librarians to heavily pick it WHILE the patrons and booksellers stand outside the door. In the beginning you were actually able to watch the devastation in real time, but the library somehow  got the hint that that it was a tad insensitive and started covering the glass with cardboard.
Anyway,  the sale triggered my despondent mood, though not for the reason listed above. In a way this is sort of funny, but since it didn’t work too well for us I’m not laughing. They made an announcement that from here on all “volume dealers” (I certainly no longer count as one of those, but I guess  an armload is volume) must store their selections in an area outside the sale room.
“No one will steal your books. They will be absolutely safe.”
Oh yeah?  And maybe you’d be interested in a couple acres of swamp land in Florida too. The last time we were there someone stole a brand new book I had just bought at Border’s  – and that was right there IN the room. But whatever. They also announced that if you chose a high-priced, underwhelming book from the “special” table you were supposed to give it to the volunteer to keep it “safe” for you until check-out. I have only once bought a book from this section. A couple sales ago I got a volume on pneumatic tires for $50 (I’d had it before) and sold it handily for $150, but most of the time the books are in terrible condition, not first editions even though they’re stated as such, and priced higher than the internet rate.  But, as luck would have it, this time I found a book I had been looking for on a specific type of Indian pottery. I handed it to the volunteer and asked her if she wanted my name. She assured me it was not necessary because she was going to lay it right next to her on the table and “keep an eye on it.”
Though I found this dubious at best, I didn’t argue and went back to browsing. I was  talking to two dealer friends when all of sudden a feeling of anxiety washed over me with such intensity I stopped everything and went to check on the book. Before I reached the table I saw that it was gone.
“Do you still have my book?” I asked the same volunteer.
“What book?”
Game over. I knew it, but I tried ro make it reappear anyway. Eventually three volunteers went on a treasure hunt but of course  all of  them came up empty. They knew I was displeased (in a low-key way though I was certain smoke must be coming out my ears) and apologized profusely, agreeing that the volunteer should have taken my name. One even intimated that she thought someone might have taken the sticker off and run it through the line as a dollar book because she knew it had not come through the check-out as special priced.
If she’s right – and I bet she is -- not only did I lose, but the library lost too. Of course they arguably brought it on themselves, but it nonetheless speaks volumes about the state of bookselling in the 21st century. The really scary part though, the part that triggered my melancholy mood, is what happened next. I stood back, looked around the room at the feeding frenzy, and for the first time ever seriously asked myself whether it was time to quit.
Of course  I’m not going to, but to even THINK that rattles my bones and shakes me to the core. If I’m going to stay in this game – and I AM – then clearly something needs to change. And it’s up to me to change it.
(On a brighter note, I did buy the complete forty volume New Temple Shakespeare set above published in 1935. Of course it’s not as gorgeous as the original Temple set, but it did help the return to sanity!)
Posted by tess at 9:02 AM

Your post sums up so well why I loathe fol booksales these days. Luckily (unluckily) for me our local library sells to better world books so there isn't really any reason to go any longer. Give me a good estate sale any day!

Abolutely! The competition at an estate sale is friendly and sane. FOL sales are like a bowl of mixed nuts. Thanks for the comment -- I neded to hear that. Good for the soul!

Tess, I am sorry about your book. I would NEVER have left it there...do not give up what you love to do. Just don't play by their silly rules. Hang on to it for dear life and pay for it right away and stick it in YOUR bag, with a receipt and continue shopping. Thievery is thievery...sorry this happened.

That Shakespeare sounds fascinating though. Glad you found it. Enjoy this day. An Elmer Follower

Thanks for the kind words. I will not ever do tht again. In fact, after it happened a friend picked one of the expensive books and asked me if he if he dared give it to them. I emphatically told him NO!

It wasn't just this one incident that got to me though. There have een so many I've lost count. Both the guy mentioned above and I have had on separate occasions to actually chase down people walking out with not only our books, but our canvas bags as well! FOL sales are not for the faint of heart.