On the Road to Bookville 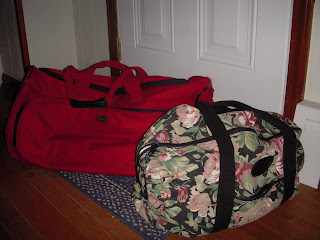 It’s hard to believe that next week we're off  to our two-day road trip to the southern part of the state. Our premier stop is an enormous book sale which I have been warned will have people sleeping in their cars overnight. Be that as it may, I am booking a downtown hotel today. We’ve drawn the line in the sand and we’re sticking to it – no creeping out of the garage in the wee hours of the morning, no sleeping in cars, and no camping out in parking lots. Incredible though this may seem, in thirteen and a half years we have only four times ever gone to a book sale that required more than an hour’s drive and three of them don’t count. When our youngest daughter was in college at the University of Toledo she conveniently needed to be picked up for fall break on the opening day of the Toledo AAUW sale. We did this both her freshman and sophomore years, but after that the girl had wheels, and the home of Jamie Farr suddenly seemed too far away. The third time we did it was this past April in Michigan, but that too is unremarkable, as our oldest daughter lives in Michigan and we happened to be there that weekend.

The only sale that was truly an anomaly was the one last June in Cincinnati. Even though it could be argued that we were there to celebrate our wedding anniversary,  it could be equally argued that Cincinnati was chosen as Party Central because of the book sale. This time, however, there’s absolutely no argument to be made. We are going to Dayton on purpose. I am, however, hoping to maximize the outlay of time and money by making the trip coincide with the purchase of some Ohioana books owned by a customer from the Dayton area. I’m also hoping we can arrange to have dinner with our friends Charlie and Mary Lynn who used to live here in Medina. I know that’s a lot to ask of less than 24 hours, but I’m asking nonetheless!

As always when it comes to traveling though, I find myself wavering. As usual, I can’t decide if I really want to go or not. I worry about things I've heard. I dwell on what needs to be done here. I'm afraid it's a waste of time or money. The truth is I am infinitely fonder of the idea of traveling than I am of the actual doing of it. I enjoy parts of it, but other parts not so much. What I’m waiting for is the technological whiz kids to replicate the Star Trek transporter. As soon as it’s possible to say, “Beam me up Scottie!” I’ll be a traveling maniac. Just think – no overhead because you wouldn’t have to beam up until it’s time to get in line. And then when you’re ready to go home – a feeling that usually overtakes me with great suddenness – you’re back where you started from safe and sound. While I never did share Eric’s fondness for Star Trek in all its many incarnations, I really did like that transporter. It sure beats having to look at the former Captain Kirk in all his current portly, florid, bombasticism on Priceline when you make reservations.

But seeing as how reservations are required and we’ll be driving on this trip we can anticipate four hours each way. The good news is there are two large antiques malls along the way. Upon occasion I have spotted some great book bargains in antiques malls, particularly one that closed earlier this year in Toledo. The first time we ever went there I thought we’d discovered the secret of the universe, as I got four books so dazzling I was afraid we’d get to the check out and they’d inform us they’d all been mispriced. They didn’t and I sold all four in three days, but we never again got that lucky there. From that point on we found maybe two or three fairly good titles a trip, but the mall nonetheless became the highlight of the trek home from Michigan to see our little grandsons. Actually, it was only one little grandson then. The shiny new one just flew in from Korea this past April.

Well, three hours have passed since I started writing this. I’ve made dinner plans with our friends, arranged to buy my customer’s books, and  nailed the hotel deal with Captain Kirk. Never mind that it’s jumped in price by $10 since I originally spotted it. While the rest of the sale-goers will be catnapping in their cars we’ll be ensconced at the downtown Doubletree Hotel, a lovely place we stayed in once before when we went to Dayton for a wedding.

I just hope it doesn’t have bedbugs. The odds against it are good though, right?
Posted by tess at 1:18 PM

Email ThisBlogThis!Share to TwitterShare to FacebookShare to Pinterest
Labels: Traveling to book sales.

The time with your husband will be an added bonus! Elmer Follower

Definitely! We always have a great time when we get out and do something different.